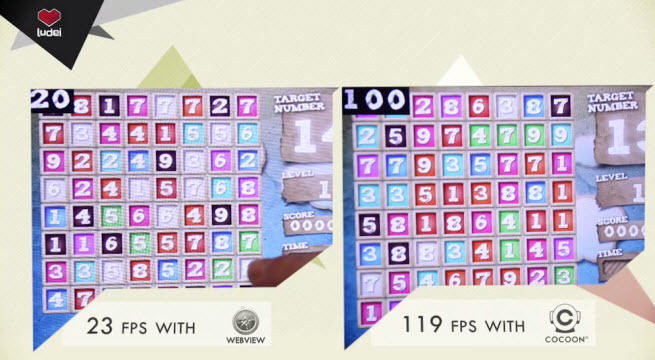 As the lingua franca for the web, HTML5 is becoming the format of choice for making cross-platform apps. But when it comes to games, HTML5 apps run too slow. So Ludei, a San Francisco company with a team in Spain, is launching a new platform to turn the HTML5 games into blazing fast applications that take advantage of the graphics hardware in mobile devices.

Making HTML5 games run fast is important because it will simplify life for game developers. Right now, they have to use valuable resources either creating cross-platform but slow games or fast native apps that have to be rewritten for each new platform.

“We manage to get much better performance for games in a browser,” said Eneko Knorr, chief executive and founder of Ludei. “But we aren’t forcing anyone to learn custom code. You can port games to iOS and Android without losing performance.”

The free tool can be used to quickly port HTML5 games so that they run on the iPhone and Android devices as if they were native code, or specially written to take advantage of every piece of hardware in the mobile device, such as its graphics chip. Many HTML5 games run in a mobile browser that does not take advantage of native hardware. Consequently, they run at a speed of 15 frames per second or so. But CocoonJS games can reach more than 100 frames per second, resulting in much smoother gameplay and fluid 3D animations.

Other companies such as GameClosure do this, but some of them use a special applications programming interface. Sibblingz’s Spaceport converts Flash games to run on mobile devices. By contrast, developers who use CocoonJS don’t have to learn how to code in a new way. It does not require a new API. Knorr says that the current technologies that support HTML5 games add a layer of complexity for the developer to learn.

The CocoonJS is a hybrid solution that blends HTML5, CSS and JavaScript. It uses OpenGL libraries to take advantage of the native hardware. Ludei is announcing a public beta and a new CocoonJS Launcher for iOS and Android developers so they can test how their game works in CocoonJS. Knorr says that implementing CocoonJS is as simple as zipping a folder. Ludei plans to monetize using ad networks and in-app purchases.

“We use HTML5 with the graphics support of OpenGL to get the performance,” Knorr said. “Developers do not need to use a proprietary API or SDK.”

One of the customers is Appoint Solutions, a Dutch developer of mobile and web apps. That company used CocoonJS to create the MonsterMove mobile game. Robert Boerman, co-founder of the company, said his team used the platform to run HTML5 games at a speed of about 50 frames per second without any code changes.

Ludei, which has offices in San Francisco and Bilbao, Spain, created its own successful native mobile games iBasket and Slide Soccer. Those games have been downloaded more than 15 million times. The company is self-funded by Knorr, who previously sold a web hosting company to Telefonica four years ago. The team has 17 people.

Here’s a video of how CocoonJS works.