The game is a follow-up to the hit 2015 mobile title, Jurassic World: The Game, but Jurassic World Alive adds the new elements of augmented reality imagery and location-based technology. So now you can go out, find dinosaurs, and see animations of how they would look in the real world.

The free-to-play game comes out ahead of the upcoming film Jurassic World: Fallen Kingdom, which debuts in early June in Europe and June 22 in the U.S. and Canada.

In Jurassic World Alive, players will encounter and collect a variety of dinosaurs while exploring their own neighborhoods and cities. They will discover creatures featured in Jurassic World and Jurassic World: Fallen Kingdom, have the ability to level them up, and strengthen their team for real-time player-versus-player battles. 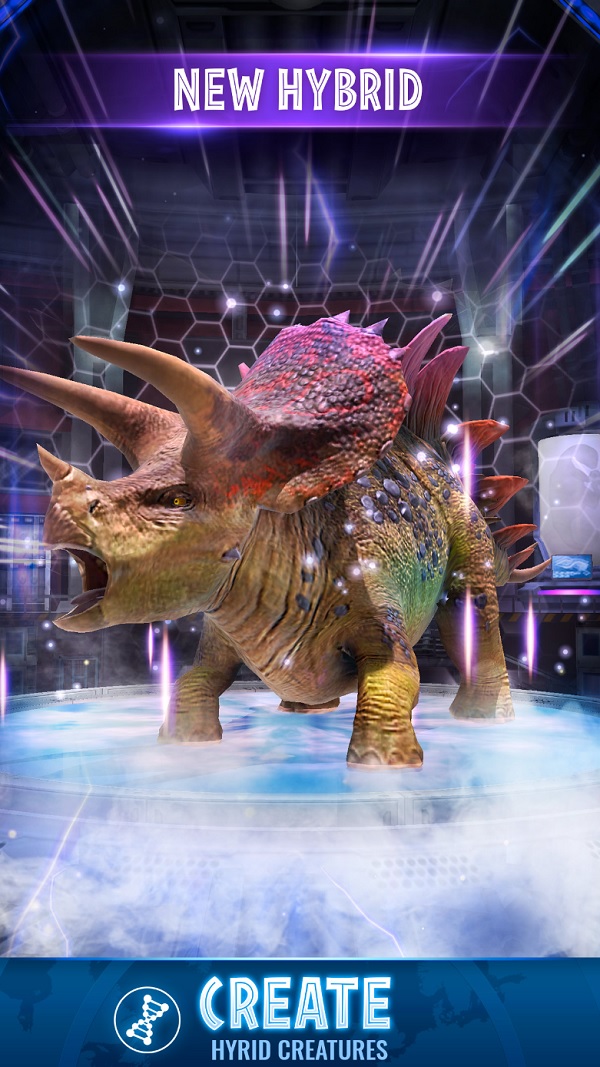 Above: Jurassic World Alive lets you create your own creatures.

“We believe this is what fans have been waiting for — to bring Jurassic World into their world in ways only the latest technology can make possible,” said Chris Heatherly, executive vice president of games and digital platforms at Universal Brand Development, in a statement. “For fans who have always wanted to engage with dinosaurs,Jurassic World Alive will allow them to interact with these magnificent creatures in extraordinary ways.”

Using the new Google Maps application programming interface for mobile games, Jurassic World Alive lets players discover dinosaurs by locating them on a map and deploying an in-game drone to collect DNA samples. This gives players the ability to level up and create genetically modified dinosaurs in a lab, then compete in real-time player-versus-player arena battles to earn more rewards. By leveraging the latest offerings in AR technology, users can interact with their collection of virtual dinosaurs in the real world, capture those moments through photos and video, and share them with friends and family.

“With Jurassic World Alive, our goal is for audiences to be fully immersed in a world with living dinosaurs in a way that’s never been possible until today,” said Alex Thabet, CEO of Ludia. “Players will have the opportunity to connect with fellow Jurassic World fans who can search for dinosaurs together, as well as challenge each other in a unique real-time PvP battle mode accessible anywhere, anytime.”

To celebrate the game launch, Walmart and AMC Theatres will offer players more ways to unlock valuable in-game content. Starting June 6 through July 31, players who visit participating Walmart retail stores in the U.S. and Canada and open the game on their devices can locate an enhanced Walmart-branded Supply Drop with in-game rewards.

Players can then snap a picture or take a video of a dinosaur using the game’s AR feature in the store and post to their social media channels with #JWUnleashed. Players can also head to any AMC location in the U.S. starting June 6 through July 31, to track down rare AMC-branded incubators, which are capsules that contain valuable resources, such as dinosaur DNA.