Dinosaurs are coming to life once again. Ludia and NBCUniversal announced that they will publish Jurassic World Alive as a location-based game on mobile devices in the coming weeks.

NBCUniversal’s Universal worked in a co-publishing deal with Montreal’s mobile game publisher Ludia in advance of the film Jurassic World: Fallen Kingdom, which arrives in theaters on June 22. The two companies are co-publishing the title.

The game taps the same kind of location-based technology popularized in games like Niantic’s Pokemon Go, which has generated more than $1 billion in revenues.

Players will use both location-based tech and augmented reality to interact with virtual dinosaurs in the real world. The game is the third in a series of collaborations between Ludia and Universal with the Jurassic World franchise.

The game will launch globally on the App Store and Google Play, just ahead of Jurassic World: Fallen Kingdom debut. 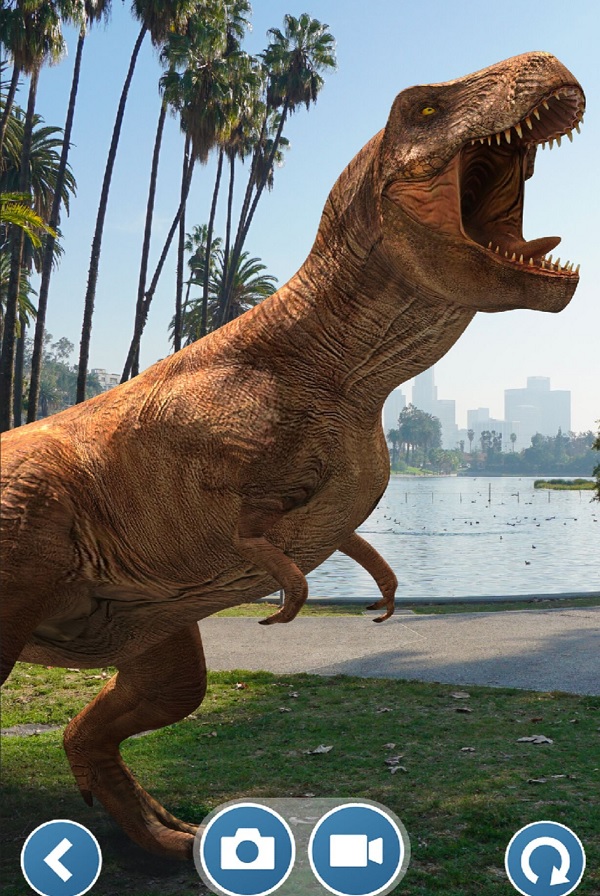 In the game, players can collect dinosaurs while exploring their own neighborhoods and cities. Free in-game incubators and exclusive dinosaurs, including creatures featured in Jurassic World and Jurassic World: Fallen Kingdom films, are in the game.

“With Jurassic World Alive, our goal is for audiences to be fully immersed into a world with living dinosaurs in a way that’s never been possible until today,” said Alex Thabet, President and CEO of Ludia, in a statement. “We’re giving them the opportunity to explore and connect with like-minded players while building and interacting with these powerful prehistoric species.”

The game will leverage the latest in AR technology, allowing players to pose and take pictures and videos with dinosaurs they’ve collected during gameplay. Players discover dinosaurs by locating them on a map and deploying an in-game drone to collect DNA samples.

Above: Jurassic World Alive is a location-based game.

This gives the player the ability to level up and create genetically modified dinosaurs in a lab and then compete in real-time player-versus-player arena battles to earn more rewards.

“Jurassic World fans have long dreamed of seeing these majestic and sometimes frightening creatures in real life. With the location and AR technology available today, we can finally make that dream a reality,” said Chris Heatherly, executive vice president of games and digital platforms at Universal Brand Development, in a statement. “We are thrilled to once again work with Ludia and think this will be the biggest and most exciting game in the franchise yet.”

Heatherly will be a speaker at our upcoming GamesBeat Summit 2018 event on April 9-10 in Berkeley, California.

Jurassic World Alive is the latest in a strategic expansion by Universal into gaming. Last year, Universal announced a significant build-up of its games team, as well as a more active approach and investment into game development. The partnership with Ludia on this title is one of the first of a slate of games rolling out in 2018 and beyond.