The Luigi’s Mansion series never felt like top-tier Nintendo. Sure, the original Luigi’s Mansion was fun and quirky when it launched along with the GameCube in 2001, and Luigi’s Mansion: Dark Moon was a great 3DS game when it released in 2013. But they couldn’t shoot the franchise to the heights of legendary Nintendo series like the core Mario games, The Legend of Zelda, or Metroid.

Luigi’s Mansion 3 is the title that will elevate this series. Coming out for Switch on October 31, this new entry from Next Level Games (which also made Dark Moon) resolves most of the issues from its predecessors while improving on everything that worked before.

This is easily the best Luigi’s Mansion game ever.

Nintendo makes a lot of cute, clever, and charming games, but few of them have been as funny as Luigi’s Mansion 3. Nothing impresses me more about the game than its presentation. The animations are fantastic. In or out of cutscenes, Luigi is one of the most expressive video game characters ever. Much of the fun comes from looking at Luigi react, often with horror, to all of the events going on around him.

I’m also shocked by just how many this game has in it. We don’t associate these with Nintendo games, but Luigi’s Mansion 3 often switches from gameplay to cutscene and back. Each individual scene isn’t all that long, so you never feel annoyed about losing control of the experience. And these moments include some of the game’s funniest moments. It all leads to Luigi’s Mansion 3 feeling like a playable animated movie.

And if we had to describe that movie, it’s a kind of lighthearted spooky comedy. It’s got ghosts and ghouls, but the it’s never all that scary. It’s more Scooby-Doo than The Shining. That’s perfect for a coward like me. 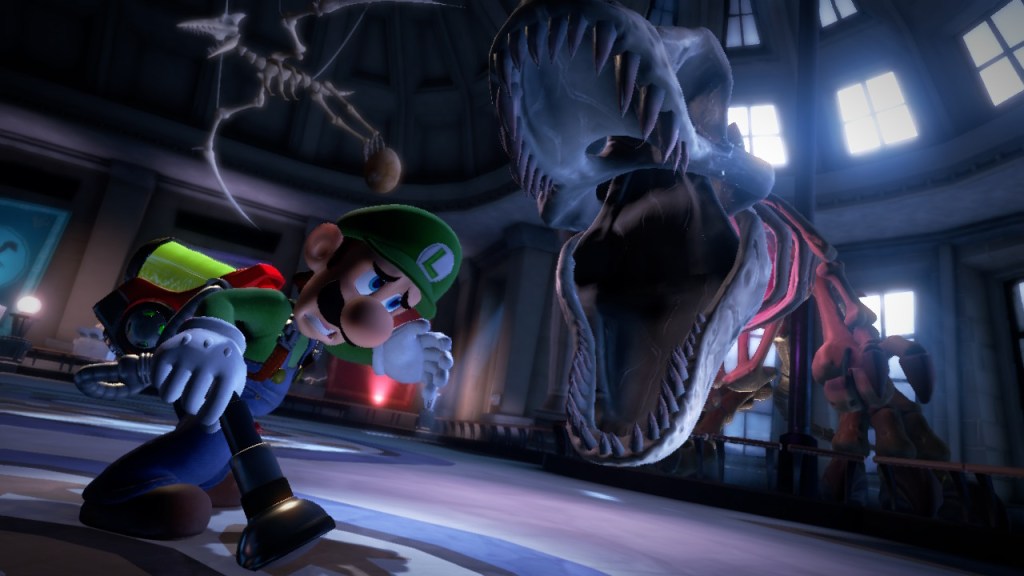 Although, just like The Shining, Luigi’s Mansion 3 does take place in a hotel. This gives the game the perfect structure, with each floor of the hotel organized as its own level, and each room on that floor having puzzles, ghosts to capture, or secrets. It’s a much better layout than the mission-based, multiple mansion structure of Dark Moon, which often had you revisiting the same areas over and over.

The puzzles are the best part. Luigi has a vacuum that can suck things in or blow them away. He can also shoot a plunger that can stick to some surfaces, and you can then suck the attached plunger back up to grab on (or smash) whatever it’s adhering to. So, on a basic level, you may find a dresser blocking a door. You can shoot your plunger at it, suck up the plunger, and then smash the dresser against the door.

But the puzzles become much more tricky and clever than that, especially once you discover Gooigi. This is the most creative and entertaining mechanic. Gooigi is a Luigi clone made of goo. Pressing the R3 button summons him and switches your control between Luigi and gooey doppelganger. Gooigi can slide between bars, giving him access to areas that Luigi can’t reach. However, the slightest touch of water will make Gooigi melt. Many puzzles have you figuring out ways to use Gooigi to open up paths for Luigi.

You don’t need to solve many of the best puzzles to move the story, but instead for finding many of the hotels secrets. Every floor has hidden gems and Boos for you to collect and capture. It gives you an excuse to scavenge every inch of the hotel, or you can just speed your way along if you’re only interested in finishing the story. 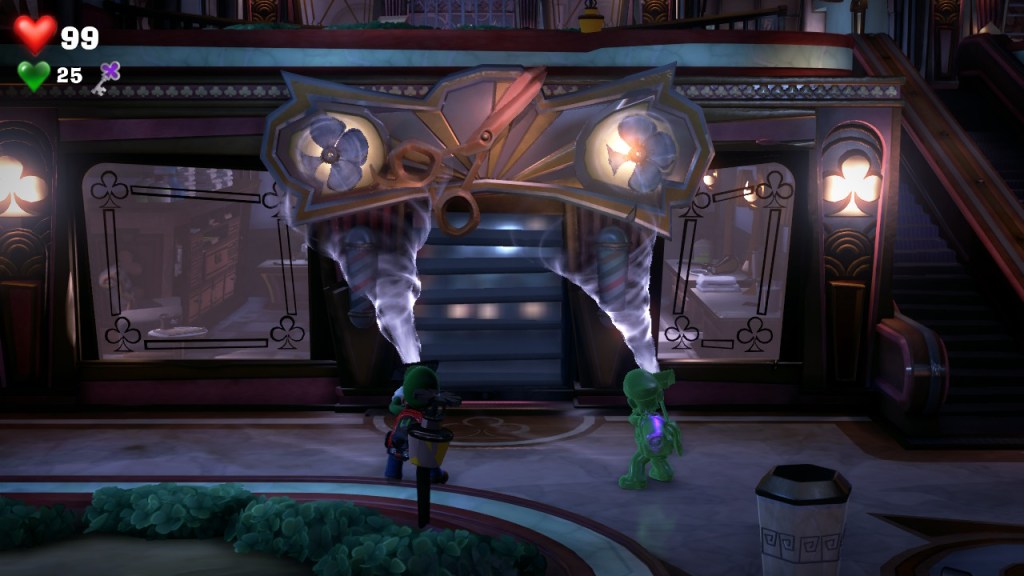 Above: A little help from my goo friend.

First off, Luigi’s Mansion 3 has a ton of bosses. It feels like you’re fighting a new one every 30 minutes or so, and each one has a distinct personality tied to the floor’s theme. One floor has a medieval castle vibe, so of course your battle a ghostly knight at the end. The fights have you doing just as much problem-solving as the bosses. You may have to figure out to stun a ghost with your flashlight while he’s protecting himself with giant, medieval shield.

I even got a bit of a Shadow of the Colossus vibe, a game that’s pretty much nothing but boss fights, just because of the frequency of all of these distinctive boss battles.

Sadly, my least favorite boss fight was the last one. I don’t want to give away too much here, but it felt anti-climatic and focused less on puzzle-solving and more on dodging its attacks and memorizing its pattern. The fight also has a time limit, the only one in the game. I have no idea why that time limit is there, especially when you can only attack the boss during specific, short periods of its lengthy attack patterns. It’s frustrating. This final fight hurts the ending. 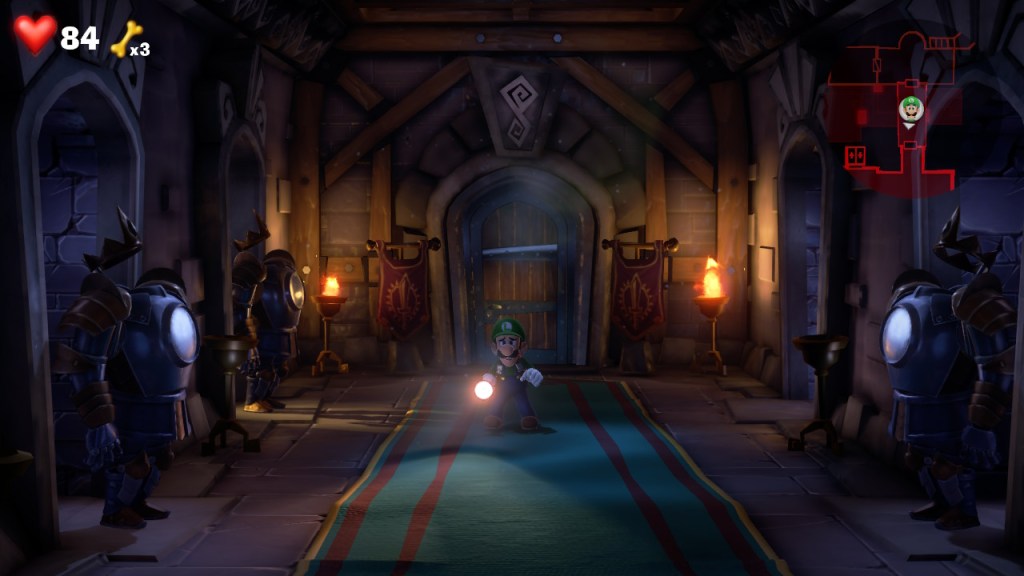 Above: Don’t be afraid!

Luigi’s Mansion 3 is one of the most creative and delightful games released for the Switch, which is saying something for a console with a library of games like Super Mario Odyssey and The Legend of Zelda: Breath of the Wild. As crazy as it sounds, Luigi’s Mansion 3 actually does some things better than those masterpieces. It’s animations and boss battles are the most impressive I’ve seen in a modern Nintendo game.

I also have to give credit for just how well the game runs. After the disappointing frame rate issues of The Legend of Zelda: Link’s Awakening on Switch, I’m happy that I didn’t discover any performance problems with Luigi’s Mansion 3. It’s a beautiful, atmospheric, and smooth experience throughout.

This is a huge step up for a franchise that has always been enjoyable but never felt special. Well, Luigi’s Mansion 3 is special. It’s a spooky adventure full of top-notch puzzles and so much charm that you’ll be convinced by the end that maybe Luigi has been the best brother all along.

Luigi’s Mansion 3 comes out on October 31 for Switch. Nintendo sent us a code for this review.