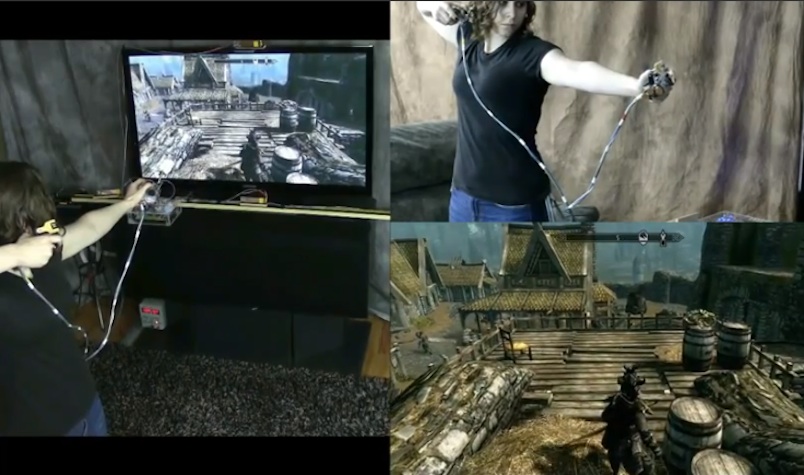 The controller itself can break apart into two portions while playing a game, and it doesn’t use accelerometers or cameras to track movements as done with other console controllers. And according to the creators, the splittable controller pieces can be as accurate as 1/100th of an inch onscreen to control characters, weapons, and even menus. The controller can also be used on virtually any game console for nearly any game — even those that weren’t initially created with motion controls in mind. So basically, this could add a whole new level of game play to all the old titles that are currently collecting dust in your collection.

As you can see from the video demo below, you can control both your character and shoot a bow and arrow on the Xbox 360 version of The Elder Scrolls V: Skyrim. Mad Genius controller takes its form from a modified Xbox gamepad. The final product, according to the company, is still in design, meaning the wires that protrude from each portion of the controller will go away. The company is quick to note in the YouTube video description that neither the Xbox 360 or the copy of Skyrim (game being played) were modified in any way.

Mad Genius said it eventually plans on launching a Kickstarter campaign to get these controllers into production, but didn’t give an exact date on when that might be happening.