The desert is full of things that can kill you, and most of them are human. That’s a takeaway from our hands-on preview of Mad Max, the new game coming from Warner Bros. based on the new Mad Max: Fury Road film.

The Mad Max movie remake starring Tom Hardy has taken in more than $219.8 million worldwide in just 10 days, according to Box Office Mojo. If the game debuting on Sept. 1 turns out well, that will be even more good news for Warner’s strategy of making “transmedia,” or stories that transcend more than one medium.

In the first four months of the year, for the first time, Warner Bros. Interactive Entertainment has been the No. 1 console game publisher in the U.S., thanks to hits such as Dying Light and Mortal Kombat X. Those games are but the latest examples of the reputation for quality that Warner Bros. Interactive Entertainment has built since the launch of Batman: Arkham Asylum in 2009.

Like those predecessor games, the new Mad Max is shooting for extremely high production values. The trailer and art being released today show that Warner and its developer Avalanche Studios (the maker of the Just Cause games) are serious about making Mad Max into a game that is worthy of the film. Gamers are rightly skeptical of movie-based games as there’s a long track record of mixed successes when Hollywood embraces gaming. But Warner, with seven internal game studios, is a good example of how to do it right.

“Life is a savage road,” the trailer for the new game intones. “Out here, a man with no wheels is a man with no hope. It’s a long, dark passage, from which there is no exit. In these wastelands, the righteous path is whichever road gets you out alive.”

The story of the game is different from the movie. It takes place in the same Mad Max universe, but the things that happen in this story and the characters you run into are unique. It draws upon elements from all of the previous Mad Max movies. But the real reason to play this game is the dynamic and chaotic car combat, where anything can happen and there’s a lot more to do than just running your opponent off the road.

Christofer Sundberg, the cofounder of Avalanche, told GamesBeat that he hopes people will compare it to Red Dead Redemption, the desert-based Western game from developer Rockstar Games that debuted to accolades in 2010.

“It’s high-octane, full speed ahead, full of action moments,” said Magnus Nedfors, the design director at Avalanche Studios, in an interview. “Scary as it might be, this world has moments of solitude. You can look out at the horizon and take a deep breath. I didn’t think a wasteland could be beautiful, but it can be.”

The world of the Savage Road 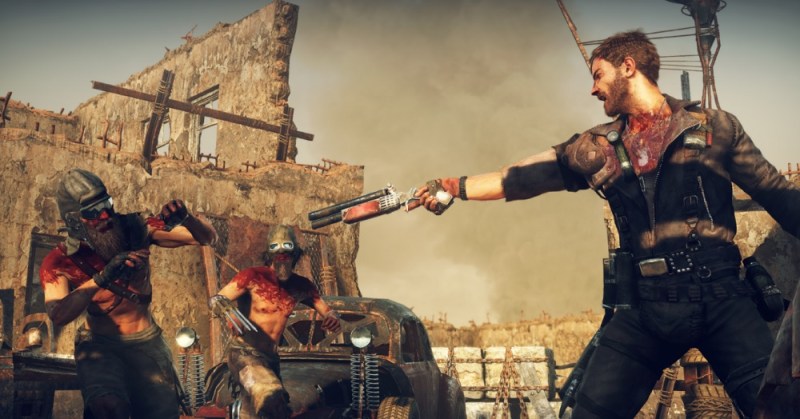 Mad Max has an open world, much like the previous Just Cause series that Avalanche Studios has built. It has beautiful 3D graphics, with flawless motion capture that gets the facial expressions and body movements right. The graphics technology is based on an evolution of the Just Cause 2 game engine. Whether it’s the lighting on the skin or the brown film of dust caking the desert vehicles, everything looks real.

“The approach to art direction on Mad Max is to show this dead, barren world and still make it exciting to explore,” said Martin Bergquist, the art director, Avalanche Studios. “We want to make it a world filled with threats and opportunities for the player. When you first look at it, it feels one way. But you’ll see surprises. It has a dark beauty. It looks and feels hostile.”

You can identify a caravan that you need to hijack by seeing a small dust cloud in the distance. Once in a while, you see a really big storm approaching you, and you have to do something about it. If you spot a small tower in the distance, that may be an indicator of a hidden loot location. At the same time, you don’t have to grind through miles and miles of emptiness, the way you would in real life. 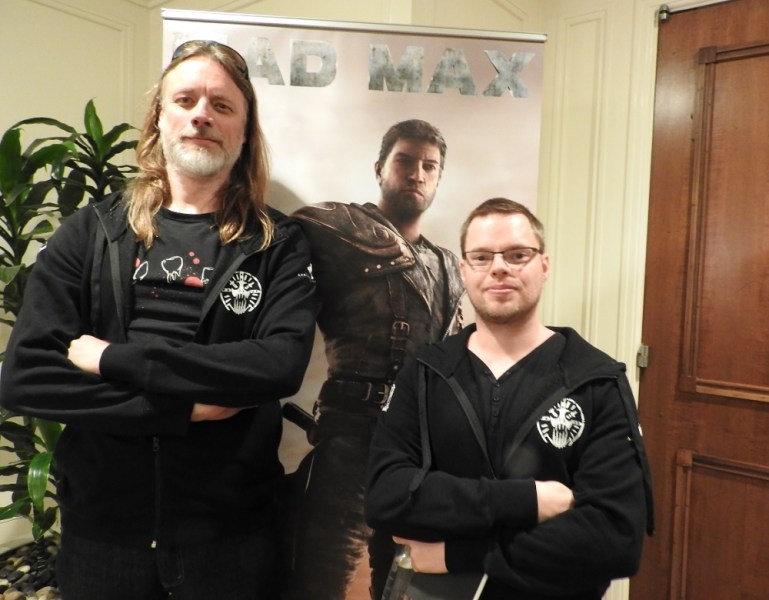 Above: Magnus Nedfors, the design director at Avalanche Studios, and Martin Bergquist, the art director, on Mad Max.

Nedfors said that the game has a balance of exploration, car combat, and hand-to-hand fighting. You have the freedom to explore and take on missions in any order you wish. There’s a full day-night cycle and weather effects that change the whole look and experience of the world.

In other words, Desert Bus, it ain’t. (In Desert Bus, you just drive a bus through the desert.)

“The actual size in meters isn’t interesting,” Nedfors said. “It’s large enough. What is interesting is the gameplay frequency.”

Brutal combat, on foot and in cars 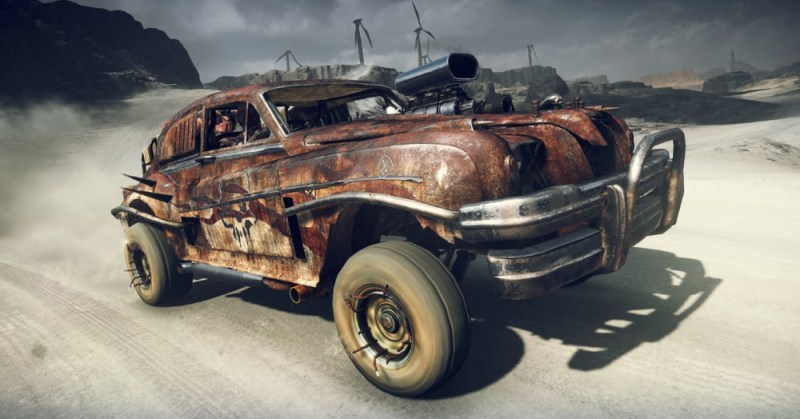 The first thing I did when I dropped into Mad Max was get into a fist fight. I had to take out three desert punks who were trying to get my goods. They were tough, and I had to time my punches and parry their attacks, much like you do in the brutal hand-to-hand combat of the Batman games. That part will be familiar to Warner’s fans.

But the car combat is something new. In contrast to id Software’s Rage from 2011, where you could chase cars and shoot at them from behind, the car fighting is almost like a battle between pirate ships. You can race alongside a car and bash into it or fire at the car as you drive side by side.

Peter Wyse, the vice president of production at Warner Bros. Interactive Entertainment, told GamesBeat that the developers showed us an advanced level in the game so that we could see what it was like to experience the “Magnum Opus,” the fully built combat vehicle that you can use to take on the denizens of the desert.

“It can take a lot of damage, so don’t be worried about taking enemies on head-on,” Wyse said.

You have a mechanic named Chum Bucket, who is along for the ride not because Max is his friend but because he can fix cars on the fly — in the middle of combat — and Max has the driving skills and fighting ability to defeat all foes.

“The big innovation is the car combat,” Nedfors said.

One of the game mechanics that takes some skill is shooting harpoons with ropes attached to them. Chum Bucket can shoot them at enemies in nearby vehicles to kill them. Or he can hit a car’s armor plate. Once it is embedded in the armor, you can swerve away with your own vehicle and pull the harpoon-attached armor plate off the enemy’s vehicle. Once you’ve done that, you can blast the car with a rocket and take it out with one shot. You can also hit one button and bash into a car alongside you. 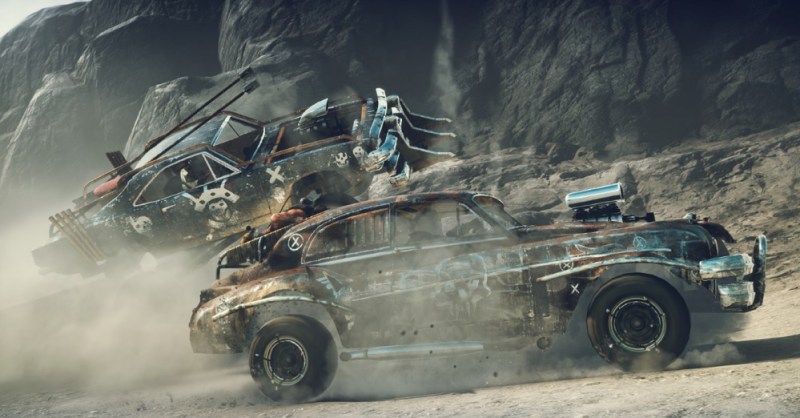 After you’ve taken out a car, you can scavenge for good stuff.

“Scrap is treasure in our game,” Wyse said. “The wasteland they built, it feels like a desperate place. When I get those resources, I’m like, ‘Oh, thank God!'”

Scarcity is extreme. You have to pick up gas cans whenever possible. And you have to gather metal scraps and craft things from them. If you stop in a base camp, you have to ransack the place to get any valuables. As you collect loot, you can purchase upgrades for your vehicle.

The interface for upgrading looks appealing. You pick up some resources that you can craft into different kinds of gear. You can prioritize things like weapons, armor, or speed.

“Ammo’s very scarce. But in those moments where you hoard it, all of a sudden you’re the most powerful person in the universe,” Sundberg said. “If you’ve hoarded all this ammo, you can take out a big portion of a camp. But then, when you’re out, you have to be really careful about how you take on the next couple of hours of gameplay before you look for more resources.” 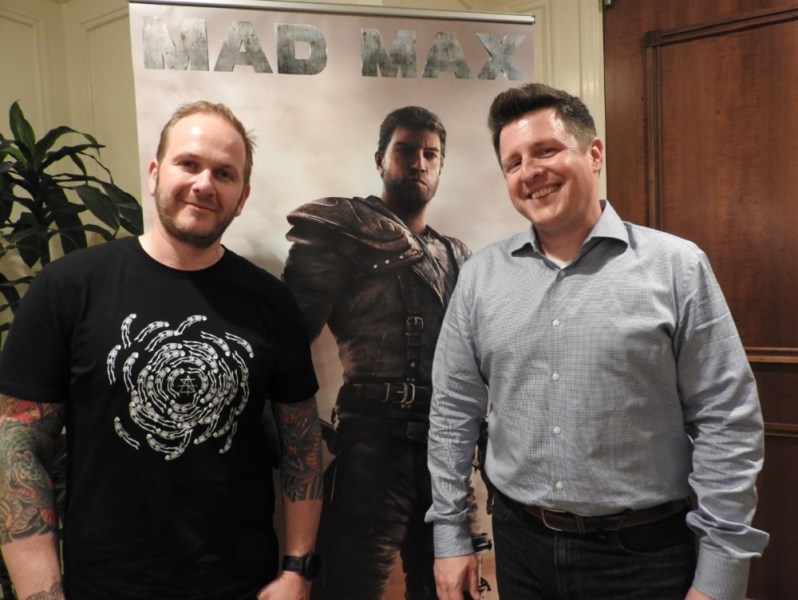