EA announced today a playbook of new features for Madden 20 at EA Play ahead of the Electronic Entertainment Expo 2019 next week in Los Angeles: Superstar X-Factor abilities, run-pass-options (RPOs), and a closed beta coming June 14 to June 16.

Face of the Franchise is the new career campaign for Madden 20. Kansas City Chiefs quarterback and reigning NFL MVP Patrick Mahomes is the cover athlete. The Pro Bowl is coming back. Scenarios will generate quest-like content.

Madden NFL is one of EA’s most valuable properties, finishing as one of the top 10 best-selling games of 2018. But it was an up-and-down year for Madden in 2018 — and not because of sales. A mass shooting erupted during a Madden esports event last June, but it also marked its return to PC gaming after a decade-long absence. Madden is also important to EA’s bottom line thanks to the sale of loot boxes for Ultimate Team, a fantasy football mode where you build teams of players. 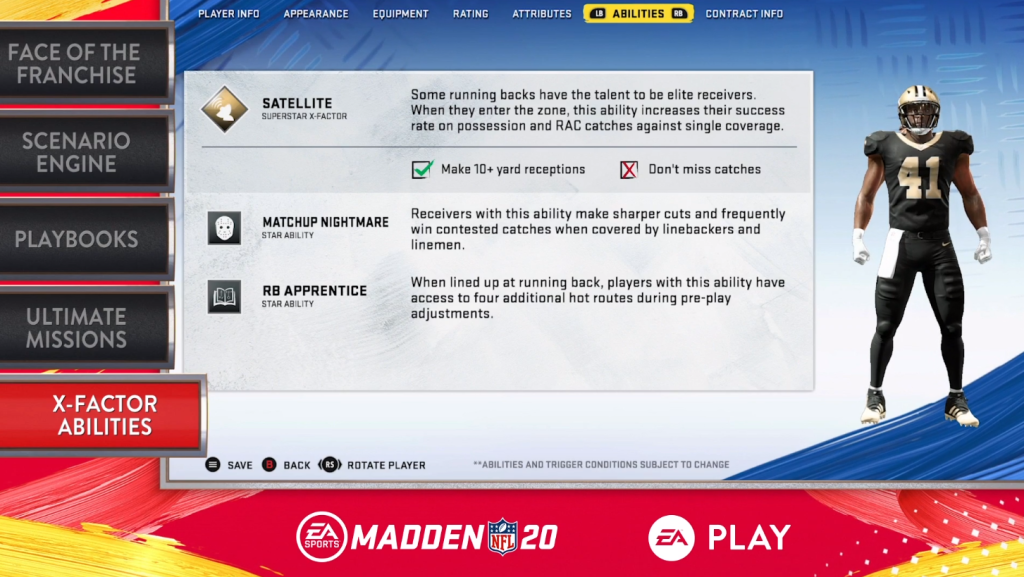 Superstar X Factor abilities help the stars stand out, taking advantage of their special skills that make them the best players in the NFL. Madden 20 will have 50 Superstar X-Factor players and over 30 Superstar players.

EA showed Alvin Kamara, the running back for the New Orleans Saints. He’s a matchup nightmare, and these new abilities help stars take advantage of their skills. Kamara is hard for linebackers to cover when he comes out as a receiver from the backfield, and now Madden 20 will better capture this.

For JuJu Smith-Schuster of the Pittsburgh Steelers, his ability is double coverage — the star wideout is hard to stop unless you put two defenders on him, as EA showed on the stream. He also handed out some beta codes to the audience — a fun touch.

Senior gameplay designer Clint Oldenburg — a former NFL lineman (and he still looks like it!) — showed off more about X-Factor play. Mahomes with his Bazooka can throw further than anyone else. “You can bomb the thing,” Oldenburg said, noting Mahomes can make throws up to 80 yards. “These aren’t gimmick abilities. They’re inspired by their actual skills,” he said. Mahomes also has Escapist Artist, which helps him scramble away from the pass rush (he’s good at that). He also has Dead Eye in the Red Zone and perfect accuracy on cross-body throws; again, these are areas in which he excels.

Elite pass rushers such as Denver Broncos linebacker Von Miller and Los Angeles Rams defensive tackle Aaron Donald will have counters. Donald’s X Factor is Fearmonger. He can apply pressure penalties to the QB even when he’s blocked. He has a Superstar ability for pass rushing as well.

“Putting pressure on the quarterback will be the counter to these abilities,” Oldenburg said. 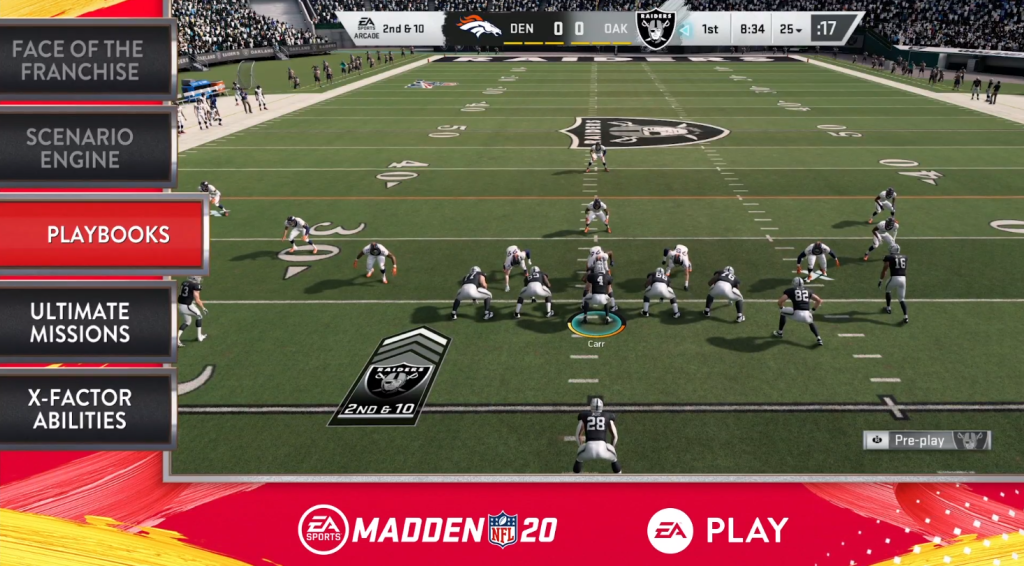 Above: The Oakland Raiders show off a new formation for Madden 20.

RPOs (run-pass-options) are coming as well. It’ll have three types, and you’ll see 220 run-pass-options in Madden 20. You can use button-presses to alter the play after you see the defense. You can keep what you have, or you can switch to a QB run or handing off for a run or passing to a receiver (be it a back, a tight end, or a wideout). RPOs have been instrumental in changing NFL offenses over the past few years — and resulted in defenses moving away from zone coverages to man-to-man schemes, and this additional focus on them is something that Madden needs.

Players will also get new formations (EA showed “single-back-double-off-close” from the Oakland Raiders), and gameplay mechanic improvements include pump-fakes — EA showed off Steelers QB Ben Roethlisberger pulling off his pump-fake before hitting a wideout on a deep pass.