This year, the long-running Madden NFL sim series is adding The Yard, a mode that replicates the sort of ball we played on our front lawns and at the park growing up.

Modes like this are important for Madden and EA Sports. The football franchise is a perennial best-seller and money-maker for the publisher, which sells millions of copies and makes more money off in-game transactions. It also has items for sale on mobile, and this mode will be on both mobile and the console/PC platforms. So it provides a new way for players to engage with the long-lived series, one that I’m sure EA hopes translates well on livestreams. And with this more casual football mode, EA is also hoping to grow Madden’s audience.

“We have been working on The Yard since shortly after we wrapped up on Superstar KO last year,” Madden NFL 21 producer JP Kellams said over email. “An effort and mode this big takes lots of work, and it was driven by our desire to engage with the motivations and the fun of casually, competitive, social backyard football.”

While The Yard looks fun, it feels like it’s missing something important. The backyard. Or, rather, the style of backyard play. Let me explain.

This new mode is a more casual way to play football. It’s 6-on-6 (5-on-5 on mobile), and it isn’t a sim of NFL play. It’s more rambunctious and free. While you have someone who snaps the ball, they’re not just a blocker — they’re an eligible receiver. And they can snap to anyone on the field, not just the quarterback. You can have someone counting “One, Mississippi, Two, Mississippi,” before they rush the passer. The field is smaller — 80 yards-by-40 yards. You can equip a ton of colorful gear.

The mode also encourages a more lax style of play — double passes and laterals, silly rules, the stuff we all pulled on the schoolyard growing up (or maybe with a beer or two in us after work as young adults or on the dorm lawn in college). And it’s tackle football — no two-hand touch, no flags. You play both sides of the ball, too. 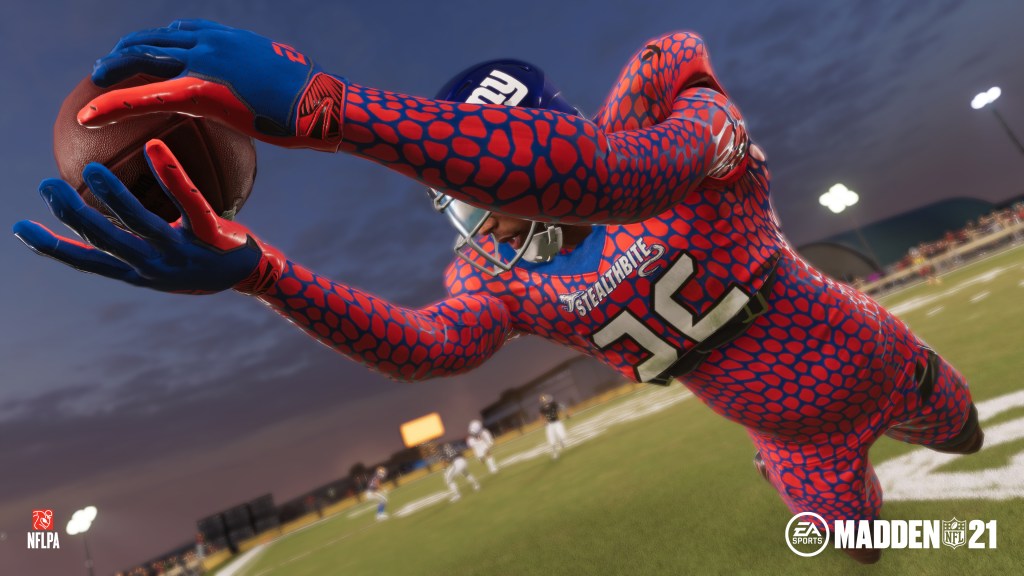 Above: This uniform is spot-on.

“We experimented with lots of ideas, and we quickly came to the conclusion that: Tackling is super-fun. It can force fumbles, stop a player’s momentum, and provide meaningful differences in the size and weight of a player. Plus, The ‘Two-Hand Touch Stick’ just doesn’t have quite the same ring to it as ‘Hit Stick,'” Kellam said. “Football gear like helmets, rolled-up jerseys, and different kinds of pads/backplates look really cool. If we are going to have tackling and the cool gear, we should stay true to the equipment that keeps players safe.”

You can also change up traditional football scoring. Normal touchdowns are the standard 6 points. But if you score with a double-pass or lateral, it’s two extra points. And scoring a TD that’s longer than 40 points gives you 7 points. You also get a bonus point off interceptions.

If that isn’t backyardy enough for you, then you can have more fun with extra points. You can go for 1-, 2-, and 3-point conversions — but you don’t kick. You have to run or pass the ball over the goal line. The longer the conversion, the more it scores.

The Yard will also have plenty of appearance customization options.

Your players follow a set of prototypes. The Madden team is using NFL stars (past and present). You begin with a few prototypes per position. Here’s how it breaks down:

Your prototype guides how you play, but you can change it up. EA provided this example in a press release:

You could choose to line up at QB, but pick a WR-based prototype, while your best friend lines up on the outside with your QB. Then you would focus on behind-the-line passes, or multi-snaps, passes to your actual QB to kick off the play.

So The Yard can run one of my favorite plays from throwing football around with my friends in middle and high school — what I fondly recall as “The Boonedogger,” in which our buddy Boone (think a white Nate Newton back in his Dallas Cowboys glory days) would snap the ball, run 5 yards, turn around, make the catch and then shrug the rest of us off his back as he rumbled toward the end zone.

As a backyard mode, I was hoping to have a player that wasn’t an NFL star — a kid, or a good representation of my middle-aged self, bad knees and all. While you can create a player that’s short, has a beer gut, or has busted wheels, it still doesn’t feel like a “backyard” style of play to me.

“We are focused on creating players that fit the general mold of an NFL athlete. But the great thing about the NFL is that NFL players come in all shapes in sizes, from short to tall, from skinny, to incredibly muscular, to the mountains that protect the line of scrimmage. You’ll have plenty of customization options for your avatar,” Kellam said.

Above: I’m all for underhanded passes.

Once you’re ready toss some pigskin, a team of players join you, randomly picked from those available at that field (and in other events, you’ll be able to draft your own team). As the lone human on your team, you can control any player on your side. You can have one to three friends join you as a squad as well, and you control one to two CPU players depending on how many pals join you.

And Kellam noted that the Madden team is open to adding custom rules, which is an essential component of backyard football.

“When it comes to rules, we have the ability to create house rules in the mode, and we welcome players feedback on the kind of rules they’d like to see in The Yard,” he said.

The Yard’s World Tour has four fields at launch, and each features a different group of players:

These locations all sound cool. I like the idea of playing at Lambeau’s, and I hope the fans are cooking some brauts for us. Playing football in one of the European strongholds of soccer sounds neat, too. 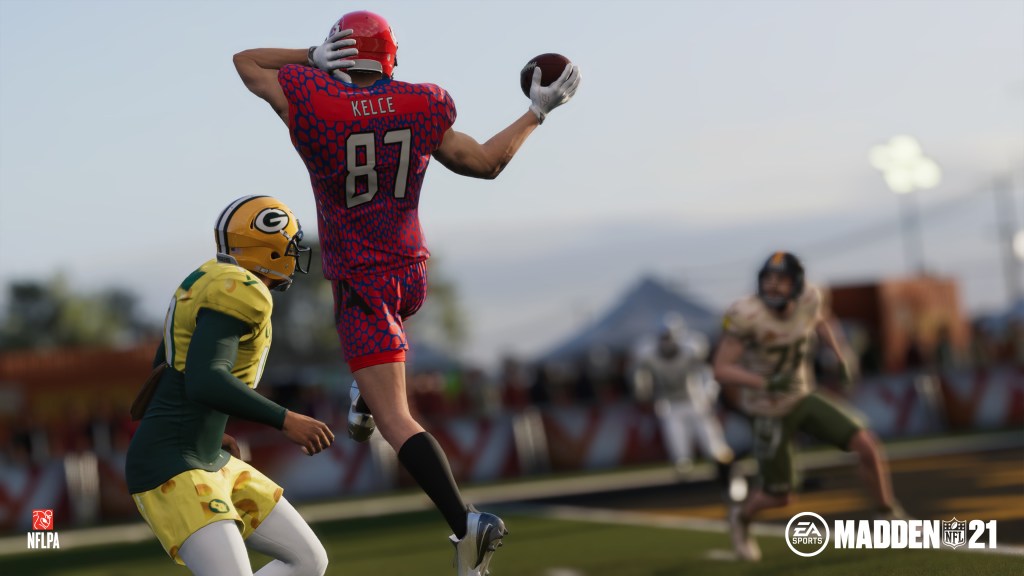 Above: You know Travis Kelce is showing off just because he wants a braut.

But I was hoping for something more … homey here. I cherish my memories of gathering my brother and bunch of friends together and playing a pickup game at our high school. Oftentimes, these games took place on fields that were more mud than grass. Or the games you played at family gatherings, using sweaters or whatever else you could find to donate the end zones. Games in which someone’s dog may run in and steal the ball from you.

When I learned of a backyard football mode, I expected more customization for the turf. Kellams took on my concerns.

“When you look at The Yard, with the equipment and NFL stars involved, it makes sense that the games have a bit more ‘production value’ to them; however, we definitely see the appeal of the ‘sand lot’ for what it represents,” he said over email, noting the appeal of playing big mud bowl games as well.

Is it backyard football?

One of the coolest aspects of pickup football is that it can be, well, whatever you want it to be. So technically, The Yard checks this box. It has a different field, different rules, and more open play. It sounds fun, especially to those of us who don’t grind Madden the way we used to but miss playing football on our couch (and who fear we may not get football of any stripe on TV this year).

NFL players and flashy fields, though, give this a whiff of a “Battle of the Network Stars” feel — a fun exhibition, sure, but it may be too flashy to qualify as backyard football. It does look fun, and I’m eager to give this a spin with my kids.

Maybe I’m just bringing the expectations of my nostalgia, getting all my friends together after a rainstorm and playing in the mud. And no video game, no matter how good, can replicate that.