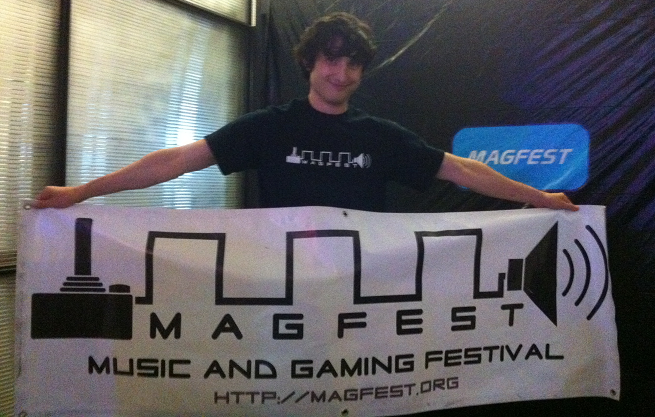 The first thing I notice about Nick Marinelli (pictured above) as I shake his hand are the grey strands of hair developing in the messy, curly mop on his head. They’re usually the beginning indicator of stress-induced exhaustion, like the physical transformation a U.S. president undergoes in his first term.

But for Marinelli, affectionately adorned with “the newbie” title, they betray the incredible amount of energy he displays. As the director of press and public relations for Maryland-based MAGFest, the Music and Gaming Festival, he runs me through how this celebration of gaming culture is counter to all my expectations.

The fast-talking Marinelli enthusiastically shakes back, asking whether I’ve heard of MAGFest. I say no, which seems a little crazy in retrospect. MAGFest is now in its 11th year. I’ve lived in Maryland since 1999. How have I not heard of this before?

As we sit down together at Baltimore’s Gamescape, Marinelli asks the first question. “Would you like a Yuengling or a Natty Boh?” I take the Boh, of course, which is shorthand for National Bohemian, the beer of the city. This set the tone for our interview that afternoon, and offered a glimpse into what MAGFest is all about.

GamesBeat: What is MAGFest? I’ve lived in Maryland for 13 years, and I’ve somehow never heard of it. I imagine that most out-of-state readers will be scratching their heads.

Nick Marinelli: You know about Electronic Entertainment Expo. You know about Tokyo Game Summit. Consumer Electronics Show. They’re really cool events. You get to see all the newest stuff coming out. You get to see never before seen previews and that kind of thing. But they’re these giant media frenzies — just total press blitzes where you wait in line three hours to get 15 minutes to try out this new game. It’s crowded, it’s busy, and it’s just a marketing frenzy.

MAGFest was started in 2002 because there was no real large-scale event where instead of going and seeing whatever the latest thing was, people could just get together and play games with each other.

Forget all the new stuff that’s coming out. Think about what’s out now. Think what you enjoy. What you like playing. Maybe what just came out that’s starting to get popular. It’s for people to get together and just party, basically. 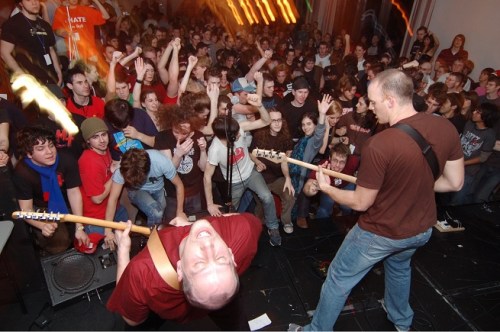 GamesBeat: That’s a refreshing change of pace as far as these things go. But how does music fit in?

Marinelli: At the same time [when MAGFest began], the video game music cover scene was really starting to pick up. And bands like the Minibosses, the NESkimos, [and] The OneUps were starting to get popular. And although they would play one-off shows, there was no place to come and see a bunch of video game cover bands.

Joe Yamine actually started the first one, and he wanted people to just come together, play games, and rock out to some great video game cover bands and drink heavily. After the first one, he — I think he just wanted to see if he could do it — he didn’t really want to do it anymore.

Brendan Becker, who loved it, didn’t want to see it go away. So he bought it from [Yamine]. And then he kind of built up an army over the next eight or so years to bring MAGFest from 250 up to 3,000 [attendees] at MAGFest 9. We sold out MAGFest 9. It was 6,000 the following year when we moved venues.

We grow slowly but somewhat predictably thanks to the fact that we’re not banking on having a big-name exhibitor to come and show something that nobody’s seen before. People come because they have friends there [and] they want to bring more friends there. They want to party, play games, and rock for the weekend with their friends, and they want to meet more friends. It’s not about seeing something no one’s ever seen more; it’s about getting together and celebrating what you love.

GamesBeat: What kind of stuff do you normally have on display since MAGFest is a celebration of existing culture?

Marinelli: When it comes to gaming, we try to run the gamut of every type of typical gaming: For consoles, we try to get from the Atari all the way up to the PlayStation 3.

Marinelli: We’re not necessarily a for-children event, but we have something that people of all ages can enjoy. ‘Cause people — kids like their Naruto these days, so they can play that, but we also have the ColecoVision if anyone wants to play that. 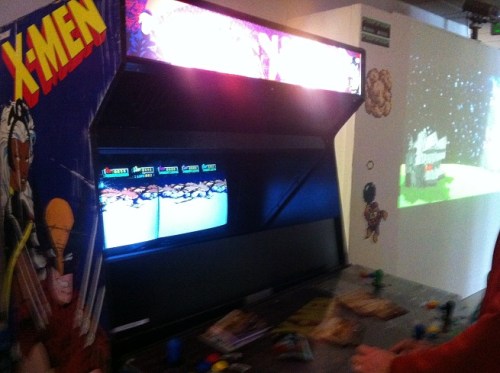 Brendan [Becker] actually tries to do a museum every year because he has a bunch of weird, esoteric systems that no one’s ever seen before — maybe you’ve heard of but never seen, like the CD-i or the 3DO or things like that. Japanese stuff like the MSX or the X68000. So, for consoles, we basically have more or less every console you could imagine — at least domestically.

We help them rent a truck, and they just build it [and] bring it in. We had 150 arcade machines last year all on free play. That X-Men machine there is ours [editor’s note: Marinelli points to a bulky X-Men: The Arcade Game cabinet sitting to our right, which features dual screens and has support for six simultaneous players. Pictured above]; we have another guy who has another six-player X-Men machine. That’s actually become a meme within MAGFest — “The Colossus.”

We have a PC area, a bring-your-own-computer land. We have tabletop games, which includes board games, card games, pen-and-paper role-playing games, [and] collectible card games.