GamesBeat: What about music? You mentioned a few bands — what else do you have?

Marinelli: Our main focus on concerts is video game music cover bands. And that’s what occupies the main stage for three nights — we’re actually a four-day event. We start with Thursday, and we go ‘til Sunday.

Up until [MAGFest] 7, we were a three-day [event], but people just started showing up earlier because we’ve become like a nexus for different gaming communities online. They want to have some place to do their meet-up. They’re maybe not big enough to have an event on their own, so they just all have their meet ups at MAGFest. People just kept showing up earlier and earlier because they just wanted to hang out with their friends more. So we said, “OK, let’s just give them content.”

So we have our main stage concerts on Thursday, Friday, and Saturday nights, and that’s video game music cover bands. During the day, we do chiptune concerts — are you familiar with chiptunes at all?

Marinelli: We have DJs and more chiptunes after the main stage concerts later at night, like past midnight. And recently, we’ve also added a second stage for anybody that we can’t squeeze into the main stage show. 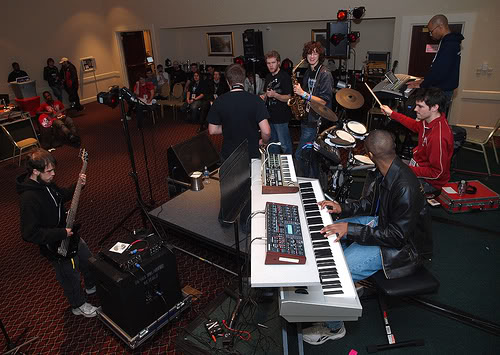 We also have Jamspace, which is something somewhat unique to MAGFest, but we try to bring it to other events as well where it’s provided instruments, drums, bass, guitar, [and] keyboard. People can bring their own stuff, too. And since so many musicians come to MAGFest and it’s such a heavy focus on video game music — it’s almost like a folk music kind of thing. Everyone knows what it is. Everyone knows how to play it. People just get together and jam with each other.

GamesBeat: Have you ever spotted someone famous rocking out at Jamspace?

Marinelli: Sid Meier [editor’s note: creator of the PC strategy series Civilization] came a few years back. He went to the Jamspace and played, he called it, “Hotel Civilization.” He got on the piano and started playing “Hotel California” with Civilization lyrics. And Jon St. John [editor’s note: famous for voicing Duke Nukem] made a song called “Balls of Steel.” [Singing] Baby I’m gonna explode unless I shoot my load with these balls of steel.

GamesBeat: Has MAGFest ever had any big acts headline the festival?

Marinelli: Our biggest act, undoubtedly ever, was last year: Nobuo Uematsu. He’s the primary composer for the Final Fantasy series. He had a band called The Black Mages, which was extremely popular, but they ended up splitting up because of contractual things with Squaresoft [editor’s note: now Square Enix]. He formed a new band with a couple of new guys and some of The Black Mages, and they’re called Earthbound Papas.

Marinelli: No relation to the game Earthbound. They played last year. And I believe we got in that concert hall alone — there were about 2,500 people in there. And that was the largest concert that venue has ever had before. 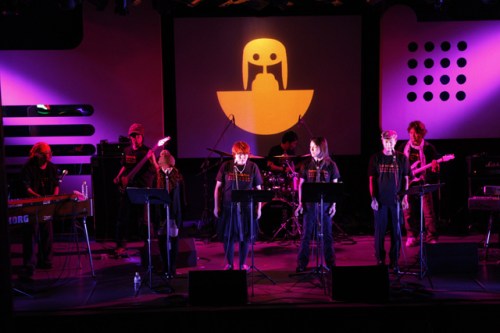 The Protomen are pretty popular. We’ve had them before. The OneUps and the Minibosses are two pretty well-known names — at least in the video game music scene.

Video game music is very much of a niche, and that’s like the entirety of MAGFest. It’s weird how we’ve grown because you have one person who’s really passionate about something and wants to bring that to MAGFest. And we’ll say, “All right, sure, we’ll give you a shot. Maybe see what you can do with that.”

We’ve just kind of grown piecemeal as the years have gone on. The concerts have gotten better independently. We’re almost like eight different events all going on at the same time at the same place ‘cause we just get a network of people who are really passionate about something and come together under one roof or management structure — I don’t know if you want to call it “management” because we’re really shitty managers.

GamesBeat: But you must be at least good enough to put together this “challenges” thing I see at your table here. What are challenges all about?

Marinelli: Challenges started at MAGFest 6. Again, the piecemeal thing, a guy had an idea, so why not? Let’s do it.

They’re save points in classics games for Nintendo Entertainment System, Super Nintendo, and Sega Genesis that put you in unusually difficult positions with very odd circumstances to see if you can beat that point in the game. Stuff like: Beat this boss, you can’t get hit, you don’t have this item that you should, [or] you’re not allowed to use some button you’d normally be able to use. And they range in difficulty from normal up to unfair.

We’ve been doing this for about four years now, and we try to introduce new challenges every year. When people come to MAGFest, they can play the challenges, and they win prizes and stuff as they beat them. Top competitors of the weekend get gift certificates, MAGFest passes — stuff like that. What we do is what we call “M Points,” these little laser-etched tokens that you can take to any of our vendors or our marketplace and spend them to buy any goods that anybody is selling.

For all of our tournaments, we try to give out M Points as prizes. A lot of places have you pay cash to enter a tournament. You win some big cash prize or some bullshit like that at the end.