GamesBeat: With things like StarCraft e-sports and fighting game competitions, it’s serious business. But based on what I’m hearing now, MAGFest strikes me as something different.

Marinelli: We are decidedly against rough and vicious competition. Big tournaments attract assholes, and if you’re not an asshole already, you’re on your way to become one the more you try. Just like when you’re here to have fun and party, it’s the same thing with the tournaments. Casual competition, have fun, [and] give your best. If you lose, no big deal. If you win, you get some gift certificates.

We try to stick to our guns on that because a lot of people ask us to host tournaments, but we really want to keep it grassroots, the way it is now: community, relaxed, [and] no pressure. Because stuff like The Evolution Championship Series — this stuff is huge! These people are serious, and unless you’ve been playing this stuff all your life, you’re not going to stand a chance against them.

GamesBeat: Do you do anything specifically to keep the tone casual?

Marinelli: Yeah. It’s been hard after 11 years, but we think that the reason that we’ve been going as long as we have is because we’re able to stick to our principles. In the face of all these opportunities to just kind of cash in and, say, get a sponsored tournament and 2,000 people who are there because of a match invitation or something like that. We’re of the opinion that if you’re just coming to MAGFest to see one thing, you probably shouldn’t come to MAGFest because you’re probably not going to enjoy it as much as you should. 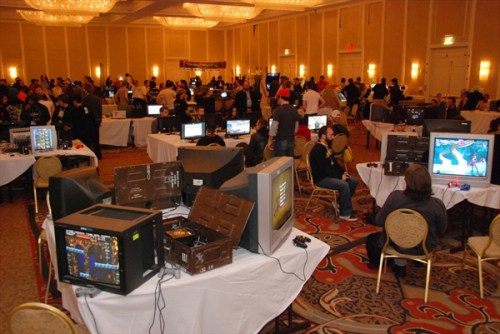 We are inherently — because of how we’re organized — less pretty than a lot of other events. We throw it together on a shoestring budget. None of us get paid at all in any way, shape, or form — well, we possibly get to take home X-Men machines! We’re just kind of doing this in our spare time.

So that’s the kind of philosophy that applies across the entire thing: Be there to have a good time.

GamesBeat: Cosplay always seems to make an appearance at anything even remotely games related. Do you see a lot of cosplayers at MAGFest?

Marinelli: People often have wondered about our cosplay situation. People always ask, “Are you going to have cosplay competitions?” or something like that. Every anime convention that you go to, they have serious judges [and] craftsman quality costumes. Our most popular cosplay group comes every year [and] spends about a half hour in their hotel room with pizza boxes, duct tape, and sharpies.

GamesBeat: So, you have a big cosplay scene that comes to MAGFest?

Marinelli: It’s a decidedly different cosplay scene. We get cosplay people, but we tell them, “If you’re going to do this, you’ve got to have a sense of humor about it.”

We welcome all cosplay types, but the thing is: If you’re going to come in here with a $2,000 dress, you’ve got to have some kind of sense of humor over the fact that you’re a grown man dressing as a video game character. If you’re demanding to be treated like a diva because of all this work you’ve put in — it’s a video game for Christ’s sake. You had fun playing it, you should have had fun making it, [and] you should have fun wearing it.

So, our costume contest is more of a costume roast. We just kind of make fun of everyone who comes in and make them battle it out. I really liked the way that our costume contest ended up last year. We recruited some guys from Baltimore Rock Opera Society to MC the entire thing. And they had fun with it, so I loved that. A lot of cheering. A lot of hootin’ and hollerin’. Not come in, turn, bow, do a dramatic sketch with Coldplay playing in the background.

You learn to realize that you really shouldn’t take this stuff too seriously. It’s just all about having fun.

GamesBeat: Right. So every part of MAGFest is about keeping it casual, keeping it fun, and everyone having a good time.

Marinelli: Exactly. Even our panels.

Marinelli: We do have some intellectual game design panels. It runs the gamut of voice actors creating sketches with each other to serious stuff, like intellectual stuff, to “what is the best movie ever made, and why is it Die Hard?”

I’m not even kidding. We talked for an hour about why Die Hard is awesome. And 500 people were at that panel. And everyone was just having an honest discussion about why the movie is amazing. I didn’t think that it would work, but it did. And I loved it. 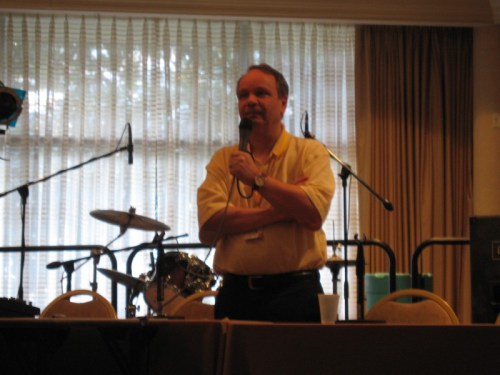 GamesBeat: Have any big-name game designers come to MAGFest to host panels?

Marinelli: Probably our biggest was Sid Meier. But it’s kind of the same vibe of everything else where we welcome big game designers to come, but the name is not what’s important. It’s the ideas and the philosophy and the passion behind it. I don’t care if you’re Cliffy B [editor’s note: Bleszinski, lead designer on Epic Games’ Gears of War series], if you’re not going to have some fun with it and some discussion that’s more than just blowing smoke up your own ass, it’s really not going to add much to our event.

So we get a few indie guys coming in, like this guy name Chris Hazard, who released a game called Achron. It didn’t get rave reviews, but the concept was amazing, and he had fantastic game design philosophies. So it was cool just seeing that guy talk for an hour.

A couple of our volunteers work for — we’ve got friends in Firaxis and Bethesda and all that. So people will drop by and say things. It’s not important who’s saying it but rather what’s being said.

GamesBeat: So the whole spirit seems to be staying focused on ideas, not celebrity.

Jon St. John — he’s the guy who comes year after year. People love him. And he loves people. MAGFest 8 and 9 — I think he had to pull it back a little for 10; he’s getting kind of old — he literally went door to door in the hotel looking for room parties. He was going in, crashing them, and taking shots and taking pictures with people. I think he got 30 room parties at MAGFest 9.

And this is how our guests work. They come, and they’re there to be with the attendees.

Extra Credits, who do a web series on game design philosophy, they did their panel, and they ran out of time, so we moved them to another room because people wanted to still talk. They talked for another hour because they’re there to interact, not to appear.

GamesBeat: Then, it wouldn’t be inaccurate to describe MAGFest as the people’s convention?

MAGFest 11 will be held at the Gaylord National Hotel and Convention Center in National Harbor, Maryland on January 3 through 6, 2013.