Since its earliest days, Magic Leap has opted not to reveal the “magic” powering its augmented reality platform, but a comprehensive teardown from iFixit today has revealed all of the components powering its Magic Leap One headset and computer. The most notable discovery is a unique multi-layered display designed to bring the company’s “spatial computing” vision to life.

Traditionally, wearable headsets have used video screens that are basically identical to televisions, but much smaller. In order to create augmented imagery that blurs the line between “virtual” and “reality,” Magic Leap One instead includes a six-layer waveguide display, akin to placing multiple translucent mini-TVs in front of one another. Using a custom projector and lens combination, the system displays red, green, and blue colors at separate depths, creating the illusion of three-dimensional objects that can more realistically appear to blur with distance. 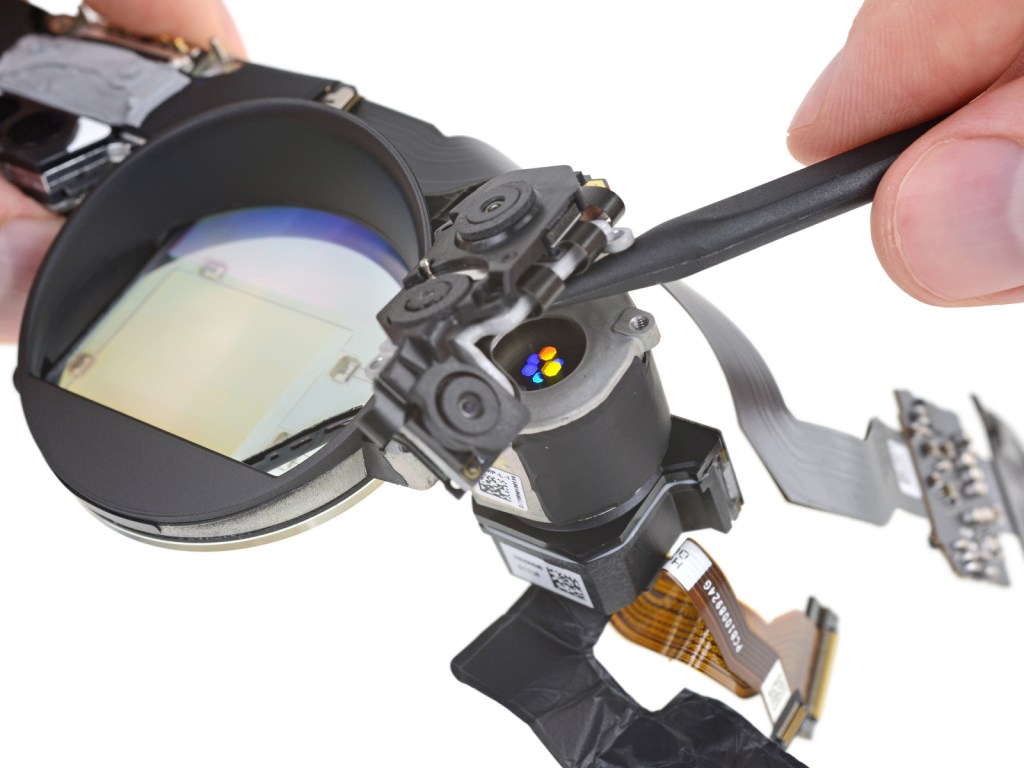 Above: iFixit’s teardown reveals a portion of the unique display technology inside Magic Leap One.

Beyond the display technology, iFixit discovered the nose bridge-mounted external depth sensor, which uses an Infrared projector and camera combination to depth-map rooms, as well as IR eye trackers. While the repair shop described the eye-tracking technology as “pretty cool,” it noted that the choice of a single, below-the-eye camera could limit tracking accuracy and range, favoring tracking of a downward-looking eye over upward tracking.

The display details and sensor positions are particularly interesting after hands-on reports from early users. During tests at the company’s offices, Magic Leap One required glasses-wearing users to have custom prescription lenses made for the headset, and exhibited controller tracking challenges when a nose piece wasn’t correctly adjusted. These issues could confound a mass-market rollout of the platform if they’re not addressed before general release.

Magic Leap One’s computing unit, the Lightpack, is essentially a tablet-class computer inside a wearable puck housing. A Cooler Master fan is used to keep a densely packed logic board cool, notably featuring an automotive-class Nvidia Tegra X2 Parker and Pascal chipset. While none of the other components is particularly interesting or surprising, iFixit notes that the 36.77 watt-hour power pack appears to be difficult enough to remove that “you’re looking at a full device replacement or a tough repair” when the battery dies.

iFixit suggests that as an expensive, bespoke product for developers, the Magic Leap One Creator Edition is well-made, precisely calibrated, and — apart from the battery — durable, but in need of a more repairable consumer model. Magic Leap has said only that it is already working on versions two and three of the headset, but has not confirmed which model will become widely available to consumers.