Following four years of development, Magic Leap announced today that it will begin shipping the Magic Leap One Creator Edition to developers this summer — a window that began on June 21, 2018 and will end on September 22, 2018. The company also confirmed that it is using an Nvidia Tegra X2 multi-core processor inside the unit’s wearable puck-shaped computer housing, LightPack.

Magic Leap’s use of the Tegra X2 means that the spatial computer’s total horsepower will be substantially ahead of the Nintendo Switch console, which uses a Tegra X1. Alan Kimball, the company’s lead of developer technology strategy, explained that the hardware includes a Parker system-on-chip consisting of two ARM A57 CPU cores that are fully available to developers, a Denver “special use case” CPU core, and a 256 CUDA-core Pascal GPU. One of the ARM cores is dedicated to feeding graphics, while another is for game and app logic; it appears that Magic Leap is reserving additional Tegra X2 cores for operating system overhead.

A 64-bit Linux-based OS called Lumin is the underlying software architecture, with a unified memory system that developers are allowed to partition as they need. The company declined to say how much memory the device will include, but suggested that no one has yet complained about limitations. It also mentioned that each of the cores has different energy consumption and performance characteristics, and developers will have the ability to choose between cores depending on their needs. Magic Leap previously promised “several hours” of battery life, depending on the apps in use.

Developers should target between 400,000 to 800,000 triangles total — half as many per eye — at reasonable frame rates, depending on the shaders, particle effects, and physics that are being used. Unlike traditional games, though, developers won’t have to worry about rendering backgrounds, which the real world will provide, so the polygons can be used exclusively for objects and characters. 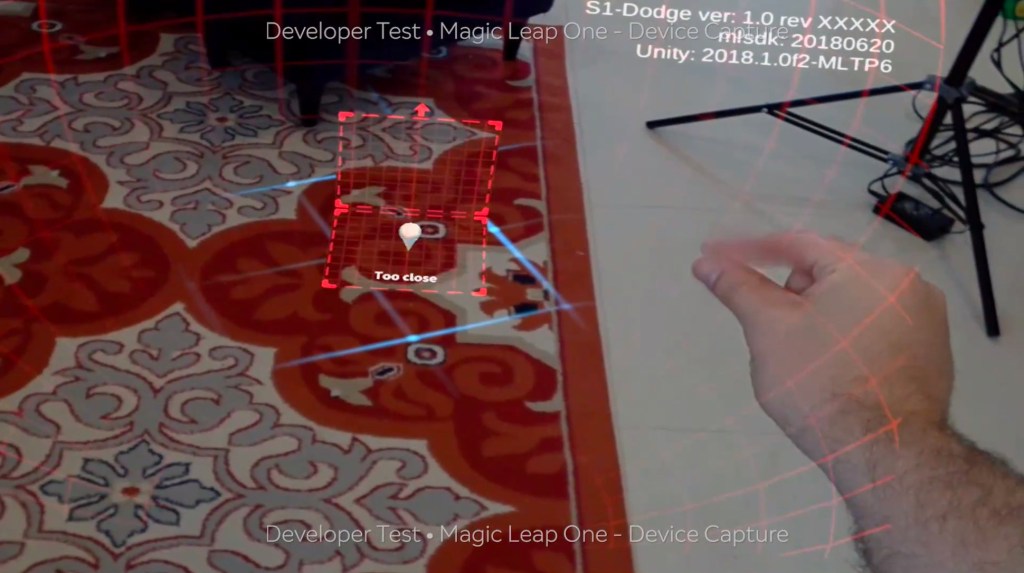 Colman Bryant, lead interaction and experience designer at Magic Leap, also demonstrated how the system can track ungloved hands without controllers for gesture input. A real room was shown with a live overlay of a virtual mesh grid, enabling a user’s pinch gestures to place objects within the space. Individual fingers and joints can apparently be tracked, as well as block, fist, and other full-hand gestures. Eye tracking and head tracking are both included as well. 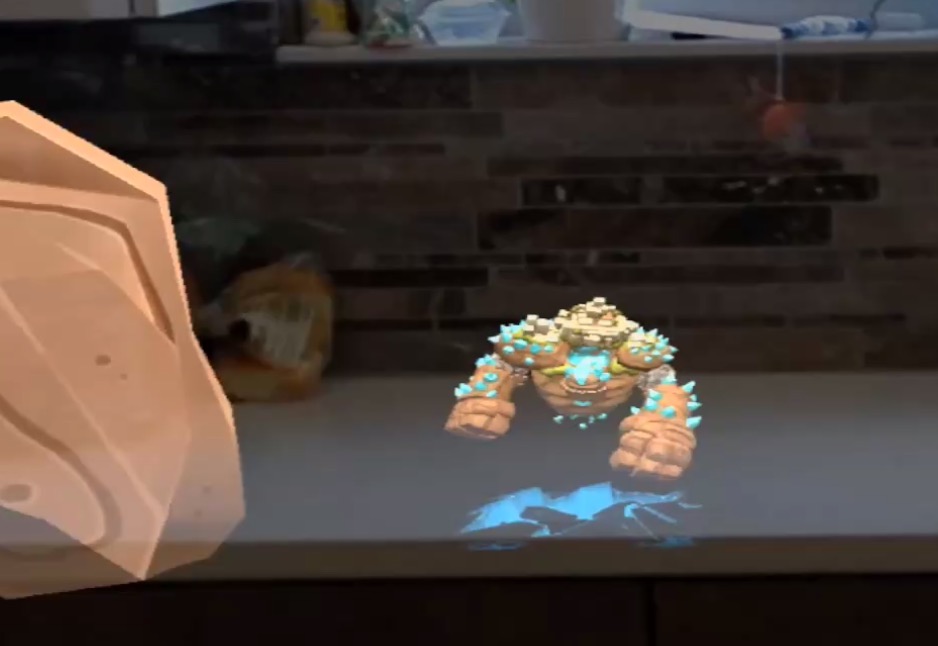 Magic Leap One’s software automatically determines the actual surfaces within the room, then displays 3D digital objects that — at least in initial demos — look noticeably less realistic than the latest ARKit apps Apple has shown off. A cartoony golem demo called Dodge showed a monster popping out of a sofa and kitchen counter, throwing rocks, and pounding on the surface underneath.

To load content onto the Magic Leap One, you can either use a USB-C port on the LightPack or transfer files over Wi-Fi. Since multiple Magic Leap Ones can join the same Wi-Fi network, the developers said that multiplayer games and shared mixed reality environments are possible — and fun. 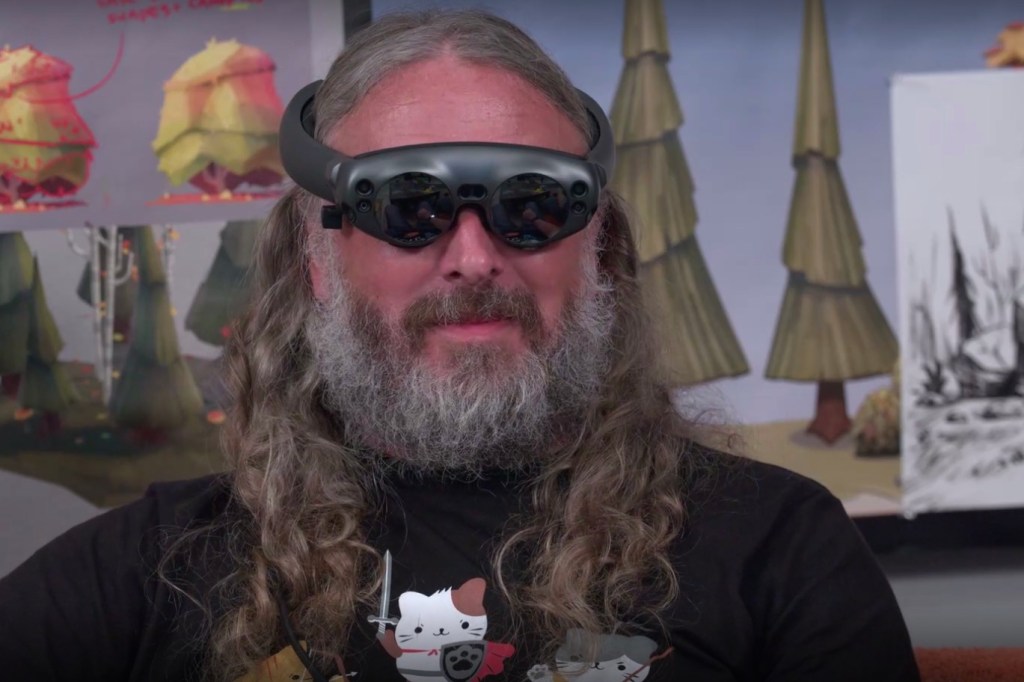 Above: Graeme Devine of Magic Leap.

The company also brought its “chief game wizard,” Graeme Devine of 7th Guest and Quake III Arena fame, to comment on the current state of game and app development for the spatial computing platform. Devine showed off Adam Roszyk’s photogrammetry mixed reality app, which can recreate a real-world room within the Magic Leap One’s 3D light field, as well as a basic shooting game that can be played in a room, and a tool that can turn voice input into virtual object placement in mixed reality spaces. Magic Leap teased further discussion of the system’s voice input capabilities for its next presentation, scheduled for August. 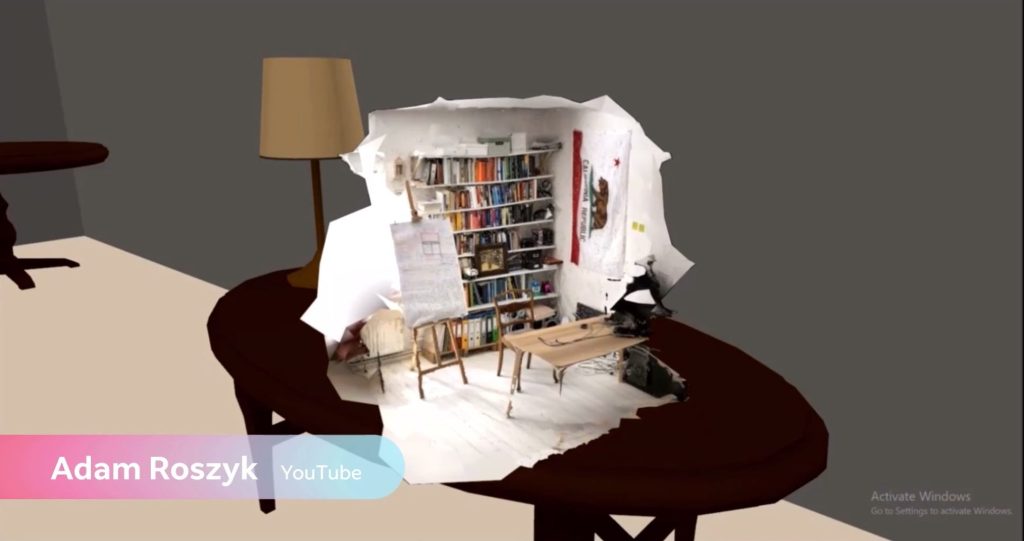 Above: A photogrammetry-to-AR scene app under development for Magic Leap.

Ahead of the demonstration, Magic Leap and AT&T announced today that the cellular carrier will be the exclusive wireless distributor of Magic Leap One devices to U.S. consumers, and is investing an unspecified amount in the company. Despite an earlier claim by Magic Leap’s CEO that the line between developers and enthusiast consumers had blurred, an AT&T statement appeared to rule out consumer shipments in 2018, suggesting that developers will get access first. Demos and sales at AT&T’s stores will take place afterwards, starting in five U.S. cities.

AT&T also appears to be preparing to offer cellular services for Magic Leap One, which until today was said to have been designed for indoor use — where devices traditionally have been served by Wi-Fi rather than cellular data. But with the launch of its high-speed, low-latency 5G network on the horizon, AT&T hinted that its “5G leadership position” would “open up new opportunities and experiences” for Magic Leap.

In addition to AT&T, Magic Leap is backed by companies including Google, Qualcomm, Alibaba, Temasek, and Tencent, with over 1,000 employees reportedly working on hardware, software, and content. Hollywood special effects studios Weta Digital and Framestore are among the companies that have publicly committed to creating experiences for the Magic Leap One.