Though Magic Leap has shared more information on its augmented reality headset in recent months, its latest revelations have been somewhat disappointing. Add this one to the pile: Developers have apparently unearthed details on Magic Leap One’s field of view — the “augmented” portion of your vision — and it’s only a little better than Microsoft’s HoloLens, not the great leap forward people have been expecting. 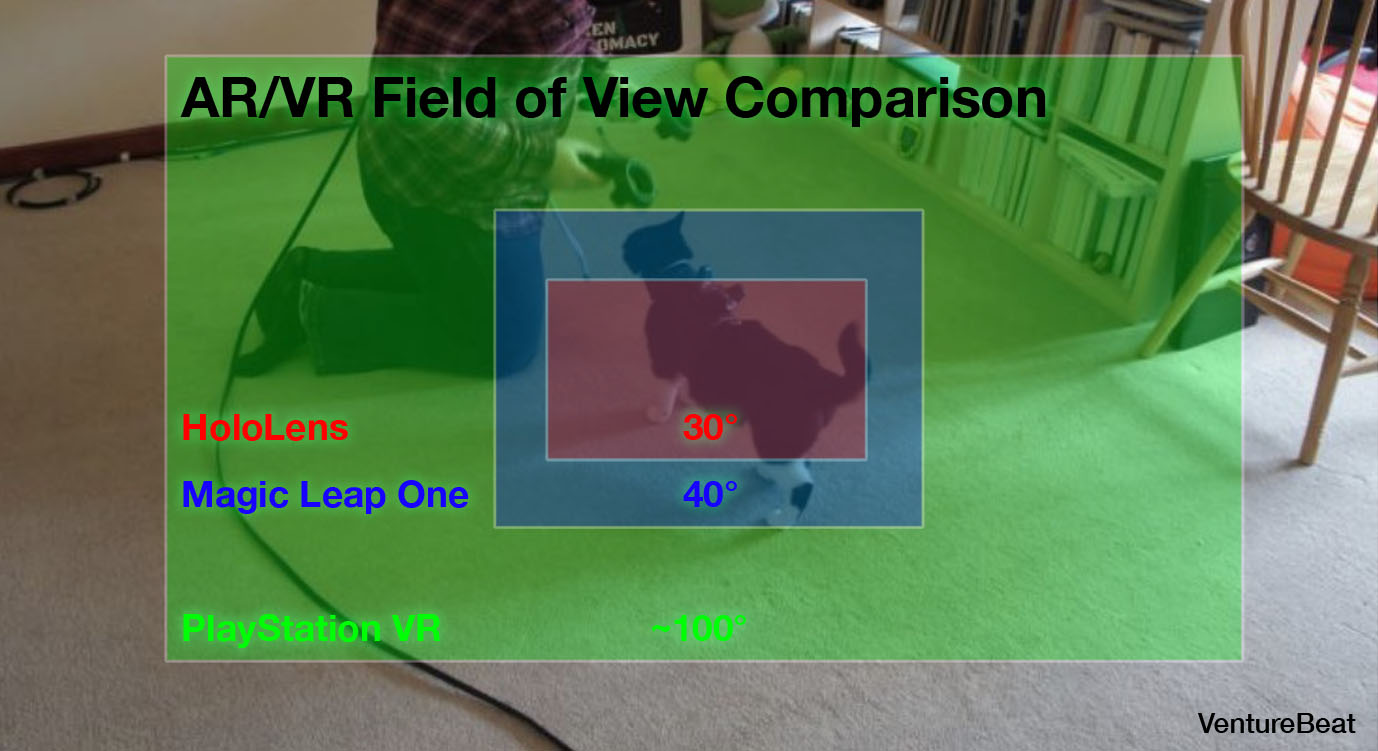 This means that looking through Magic Leap One will not provide a sense that you’re fully immersed in a combined real and digital world — instead, you’ll see a digital window floating on top of a larger real space. The company says that the digital window will be big enough to depict a “large house cat” at a distance of 40 inches away, or a large widescreen television at a distance of 110 inches away.

The image above illustrates generally what this means. By comparison with Sony’s popular virtual reality headset (green), which provides a wider and taller field of view that is nearly but not wholly immersive, Magic Leap One’s field of view (blue) will be considerably smaller, though not as small as HoloLens (red). To make the presence of the digital window less obvious, Magic Leap is suggesting that developers use a technique to gently fade content in and out as it hits the window’s edges. 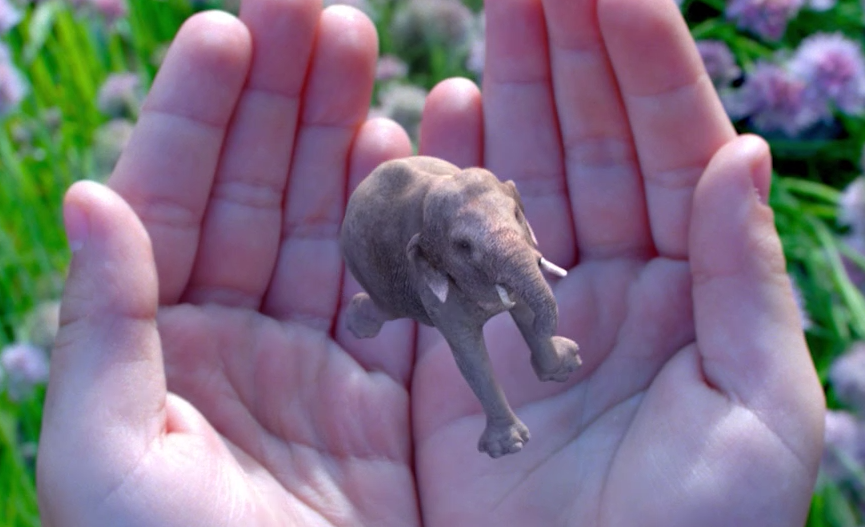 Above: In this 2014 image from the Magic Leap website, a tiny, photorealistic elephant dances in someone’s hands.

It should be noted that the AR viewing area was discovered in the source code of a “field of view” document for Magic Leap developers, buried under the phrase “Coming soon on launch day!” So it’s possible that the hidden details are inaccurate, though it’s more likely that they’re correct and that Magic Leap didn’t want to share the disappointing information until the product was out in the wild.

The text in the source code reads:

Field of View is widely used in XR to measure the viewable area a person can see through a device like Magic Leap One. While helpful in providing a baseline measure, Field of View can be misleading as it is a 2D concept and does not fully describe the three-dimensional attributes of space directly visible through our device. A 2D Field of View is a relative measure and is dependent upon the depth and scale of the content being viewed.

Instead, the term Viewing Frustum (or View Frustum) better describes the three-dimensional space within which lightfield objects are viewed. With a focus on design guidelines and best practices, our volumes can range from hand sized characters to larger objects like 90″ TV screens or even spaceships. Spatial computing is about working in volumes and spaces, not just a 2D Field of View.

For context, here’s a list of real world items and the distance from the you at which they’d be fully contained within the viewing frustum of the device:

That all said, as a developer you need to know operational values of the device. Magic Leap One has a horizontal FOV of 40 degrees, a vertical FOV of 30 degrees, and a diagonal FOV of 50 degrees. Check out the following documents and samples for more information on ways to work with the device to have larger content, and experiences, that feel good to your users.

Above: One of Magic Leap’s video demos suggested that it would be able to augment reality with relatively large, photorealistic digital objects.

As photos and demo videos for the Magic Leap One have depicted seemingly immersive experiences, it’s an open question at this point whether the headset will actually deliver on that promise. But it’s difficult to imagine a device with a relatively narrow field of view serving as a viable platform for games, or other experiences that benefit from surrounding your eyes. Much to the consternation of AR fans, truly immersive augmented reality may still be years away.

Magic Leap One is supposed to begin shipping to most developers this summer and will apparently be generally available to consumers in 2019. Microsoft is reportedly developing a second-generation, 2019 version of its HoloLens with around double the current 30-degree field of view, and Leap Motion has developed a North Star augmented reality headset with a 100-degree field of view.