Magic: The Gathering publisher Wizards of the Coast is no stranger to the digital trading card game.

Its now-annual Duels of the Planeswalkers series has enjoyed success over the last five years, innovating and iterating with every new entry in the series. This year, Magic 2015: Duels of the Planeswalkers has received a long-sought feature fans of the franchise have wanted since the beginning: fully customizable decks. To that regard, Wizard’s offering stands to perform better than ever. But can it maintain a spot at the digital trading card table?

Earlier this year, Blizzard released its own take on the trading card game (TCG) with Hearthstone: Heroes of Warcraft. First unveiled on PC, Hearthstone made the jump to iPad, quickly becoming the most downloaded iPad application in the span of a day.

That kind of success is hard to ignore, and for many, has signaled Blizzard’s arrival and dominance of yet another market. But Wizards of the Coast, which has also found success in the mobile space with its digital Magic: The Gathering series, isn’t at all concerned.

“We feel like any entrant into the TCG market, whether it’s digital or paper, is great,” Magic brand manager Liz Lamb-Ferro told GamesBeat. “It’s such a wide genre. We’re proud to have founded that genre and really owned it for the past 21 years and we feel like we’re continuing to be on the cutting edge of that.” 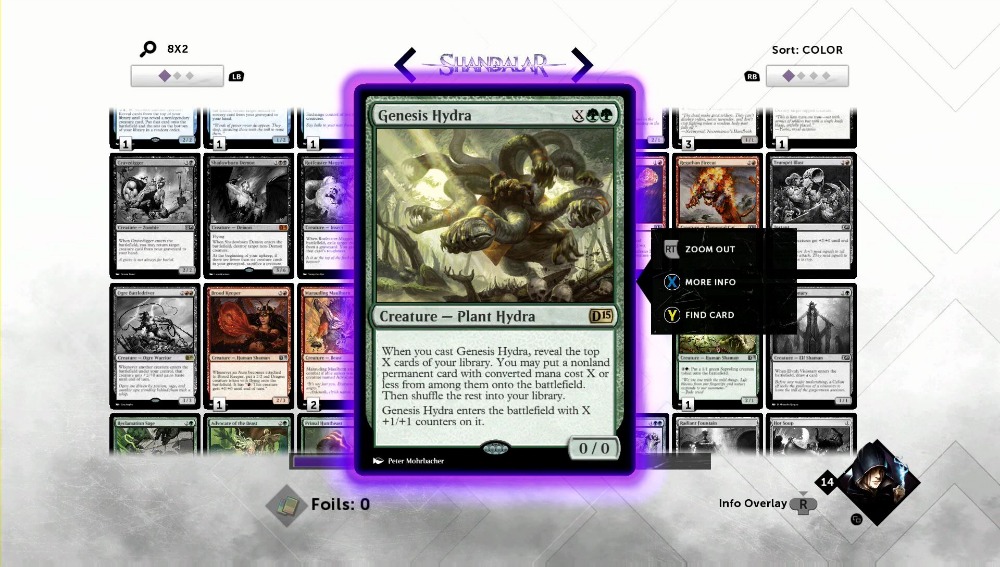 Above: One of the many newly designed cards coming to Magic 2015.

Wizards of the Coast regards Magic: The Gathering as the world’s best strategy game with a wide range of combinations of cards, mechanics, and tactics. Though Duels of the Planeswalkers has historically limited the staggering number of cards in a library amassed over two decades, the grand design and spirit of the game is still very much alive and well therein.

This is something Wizards feels its competitors can’t match.

“It depends on what you’re looking for as a player. If you’re looking for just that immediate face-to-face, back-and-forth action-based game with not a lot of depth to it,” Lamb-Ferro said, “then you can find that. And you can play that way in Magic if you wanted to as well. But if you want the extras … then you’re eventually going to find your way to Magic. And it’s not to say one’s better or worse than the other, they’re just different.”

Magic 2015: Duels of the Planeswalkers is now available on PC, and Xbox 360. A free-to-play version is available on iPad, Android tablets, and Kindle Fire.

The Xbox One release, previously planned to launch simultaneously, has been delayed. In a comment provided to GamesBeat, Wizards of the Coast said, “Due to unforeseen challenges, the Xbox One will be launching later this summer. We are looking forward to delivering a high-quality Magic experience for our players and fans on this exciting next-gen platform.”