If GamesBeat had a Most Ridiculous Game award for the Electronic Entertainment Expo (E3), this year’s winner would’ve probably been Maneater. It was by far the funniest demo I saw at the annual video game trade show.

Coming to PC (via the Epic Games Store) in 2020, Maneater is an open-world action role-playing game where you play as a lone bull shark. But you’re not just an ordinary bull shark. You can launch yourself into the air to attack boats or avoid gunfire, find secret locations in the ocean and take on other apex predators, or hop along the beach and enjoy a midday feast by chomping on some tasty sunbathers.

Maneater is more than just a shark simulator. In a hands-off demo at E3, developer Tripwire Interactive revealed the game’s clever narrative setup: The story is told through the point of view of the reality TV show Shark Hunters vs. Maneaters, which follows the ongoing feud between the shark and the fisherman Scaly Pete.

Scaly Pete disfigured the shark when it was a baby, so everything you do is in service of getting your revenge against him. However, since the shark can’t speak for itself, the show’s host (with former Saturday Night Live cast member Chris Parnell in the role) will offer witty commentary about your exploits.

Some of the dialogue is scripted for major story beats, while others are context sensitive. Tripwire wants the host to stay funny and fresh throughout Maneater, so it’s making sure Parnell has a lot to talk about. So far, he has 90 different lines solely dedicated to situations when you’re munching on sweet human flesh.

“[The host] is also, to a degree, the voice of the shark … he’ll make comments about what is happening in the story, in the arc of the shark’s evolution,” said Tripwire president John Gibson. 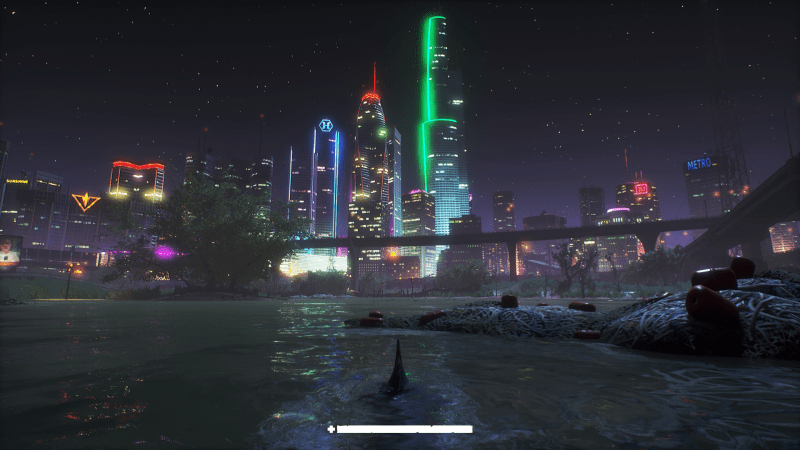 Above: Taking a nighttime stroll.

Before you can take on Scaly Pete and other threats, you’ll have to help your shark grow up. You start off Maneater swimming around as a baby, but once you cross specific level thresholds from eating and completing activities, you’ll become a teen, then an adult (as I saw in the demo), an elder, and finally, a megalodon.

Yes, over time you’ll become the size of an ancient prehistoric shark, and I’m excited to see how the heck that plays out in the game. But to get to that level, you’ll need to stock up on nutrients: proteins, fats, minerals, and rare mutagenics. All the wildlife you’ll find (like turtles and smaller fish) carry one or more of these nutrients, and you can find bigger stashes of them in chests scattered around the ocean.

These nutrients help you upgrade different parts of the shark, including its tail and teeth. Eventually, you’ll find advanced evolutions that are gleefully ludicrous. Tripwire showed concept art of a shark covered with electromagnetic spikes (creating electrical fields that’ll disrupt fish and equipment) and another one with its head reinforced by armor-like plating. Once you collect these evolutionary powerups, you’ll be able to swap them out whenever you visit one of Maneater’s special grottos.

Defeating apex predators will also unlock new evolutions for you to mess around with. In the demo, the shark ran into a huge crocodile that was ready to defend its territory. But like the shark, these predators (with one in each of the game’s seven regions) will only get bigger and more powerful. Another piece of concept art showed a giant sperm whale wrapped in barbed wire.

Tripwire creative director Bill Munk warned that you’ll “probably have to be mega-sized” to even stand a chance against it. 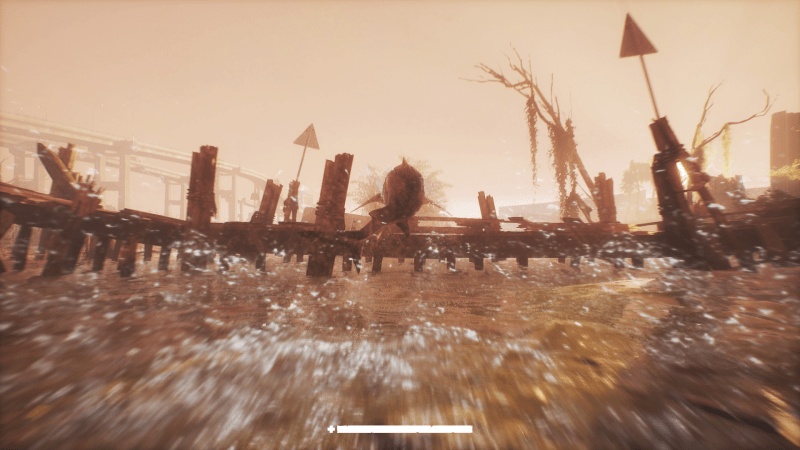 Above: Building up momentum in the water will let you jump over small obstacles.

Maneater has a lot more to it: side quests, shark abilities, and bounty hunters with silly names like Bayou Billy and Two-Ton Shirley that come after you if you eat too many people. But for me, the best part of the E3 demo was a simple one. Munk was ramming a boat with a handful of gun-toting bounty hunters onboard, occasionally jumping through the air to snatch them with his jaws. At one point, he swam to the back and plopped himself down on the guard rails.

With half his body on the boat and the other half just hanging in the air, he moved slowly along the railing — a fat bull shark clumsily bunny-hopping one foot at a time. Amazingly, the stealth approach worked. Munk picked off the surviving bounty hunters at the front of the boat before diving back into the water.

It was a hilarious moment that perfectly captured just how absurd Maneater is, and I can’t wait to play the game for myself next year.