Adding Princess Peach to my party was what did me in. It seemed like a solid choice: she’s got strong defensive skills, a quick little heal on many of her moves, and a powerful shotgun. When is picking a shotgun bad? Never, I thought, and that was the problem. That shotgun, which would occasionally auto-attack, would both destroy cover and light my party members on fire, both of which posed problems.

So I restarted this late-game level. And I restarted it again. And I only managed to beat it with Peach as my last survivor, dashing through pipes to reach the victory point with just two hit points left. My skill choices, my team selection, the enemy types, and the level layout all combined to put me in a really difficult situation.

Yes, I’m talking about Mario + Rabbids: Kingdom Battle. The crossover that never made any kind of sense, that nobody seemed to want when it was announced, suddenly flipped at E3 when it became clear that it was actually a tactical XCOM-inspired RPG. The whole process might have been the first recorded reverse “milkshake duck,” with people like me going from no interest (or less!) into genuine curiosity. So I went into last week’s preview event not just to look at Mario + Rabbids: Kingdom Battle as a Mario game, but to check out where it fit in the suddenly vibrant genre of tactical strategy and role-playing games.

As my experience with Peach showed, this game is legitimately deep. While it was frustrating to lose repeatedly in a demo, it was also fairly easy for me to see that my main problem was a lack of context and progression for my characters. That is, had I known how Peach’s shotgun works, how Mario’s jumps could be upgraded, and what kind of skills my Rabbid Yoshi could use, perhaps I’d have done better.

The development team also gave a presentation just before we did these advanced levels, where they showed some of the combo possibilities for high-level players. This included skills that pulled enemies together for area of effect attacks, or the sniper Luigi launching himself across the map using multiple movement abilities to get in the best position. Whether or not casual players (especially children) can get to the point where they’re able to pull off these combos is a legitimate question, but just the potential is promising 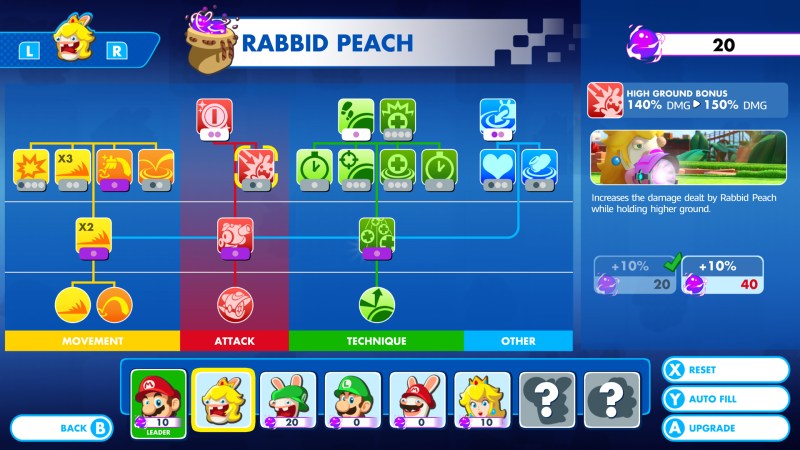 Above: This is a gosh dang real skill tree with interesting choices

That potential for skill combos exists because, despite looking a lot like XCOM, Mario + Rabbids has a few distinct differences that make it a lot more focused on performing wild maneuvers. First, it’s more of a role-playing game than most other tactics titles these days, with only three characters in a party at a time (always Mario, with Luigi, Peach, Yoshi, or the four Rabbid variations of those classics tagging along). Each has a specific archetype: Mario is a bruiser, Luigi a sniper, and Peach was described to me as a paladin, wielding defense, offense, and healing all together. Their skill trees also allow for a lot of customization, allowing you to build for movement, power, or special moves.

Second, where most tactics games allow characters to do one or two things per turn — moving and/or taking action, usually — Mario + Rabbids offers four. Every turn, a character can move normally and take a regular shot. They can also use a special ability at the end of every turn, which are things like going into increasingly powerful special reaction shots, or buffing nearby party members.

But mobility is the most important thing for allowing players to string together clever tactics. Beyond the simple move each character can always do, they also have other options if they run into an enemy, a friendly character, or a pipe. With the first, characters will do a sliding melee attack and still have all their initial movement. With a friendly, characters launch into the air to get better tactical positioning. And with the last, pipes not only transport your party members across whatever boundaries, but they give a bonus to movement afterward.

All these make for more options, but they combine with the skill tree of individual party members to create a lot more distinction for the eight characters. Mario, when leveled up, can do damage near where he lands, while Peach heals friendlies that she lands near. The higher the level, the more significant the potential changes.

The net effect is that the system is built on planning out each turn for maximum impact. This makes Mario + Rabbids feel more like a tactics games built on combo planning, like Disgaea or Dynasty Tactics (as opposed to the granular gambling systems of XCOM or Fire Emblem). 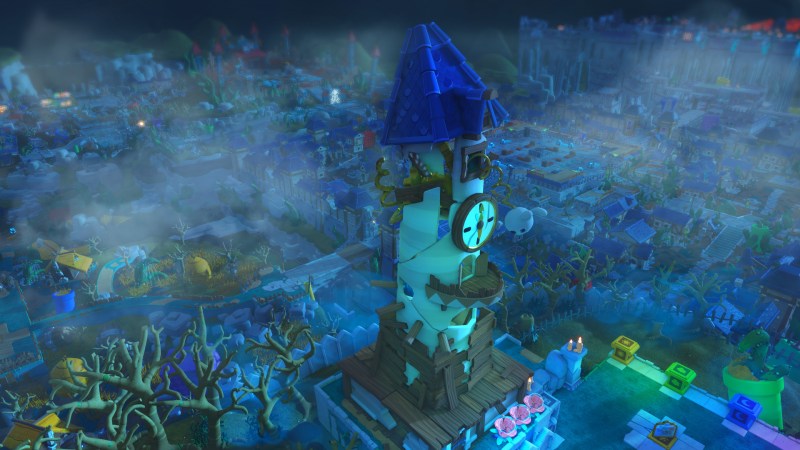 Above: Four of Mario’s world types are here, including Boo’s Mansion types. Happily, no water levels.

The cuteness is serious too

So Mario + Rabbids offers surprising tactical depth. That’s great, but this is, at its heart, still a Mario game set in the Mushroom Kingdom. So it needs to be charming, and despite being developed by Ubisoft and not Nintendo proper, Mario + Rabbids delivers. Everything is bright and cheerful, the text is to-the-point except when it’s being funny — and it was actually amusing in parts, delving into Mario references deftly.

Perhaps, surprisingly, the camera movement impressed me most. With the XCOM reboot, the camera became a critical part of making tactical games feel urgent, as its burly squaddies slammed up against cover, Gears of War-style — although it also had its quirks. Mario + Rabbids has different camera needs, and instead uses it to accent the personality of the art style and animations. It felt tightly designed, showing me what I might want to see without ever feeling off.

I still have some major questions about Mario + Rabbids. This game will succeed or fail based on how well it teaches players the intricacies of its progression systems. I’m also a little concerned about whether it has long-term staying power, thanks to its embedded, non-random level design — although Ubisoft seemed very keen on pushing us toward the cooperative option as the game mode for players who want more.

Yet given that six weeks ago this was a game that had to justify its existence, Mario + Rabbids: Kingdom Battle has done an amazing job in presenting itself as a serious tactics experience as well as a charming Mario game. Mario + Rabbids is legit, and that might make it the biggest positive surprise of 2017.