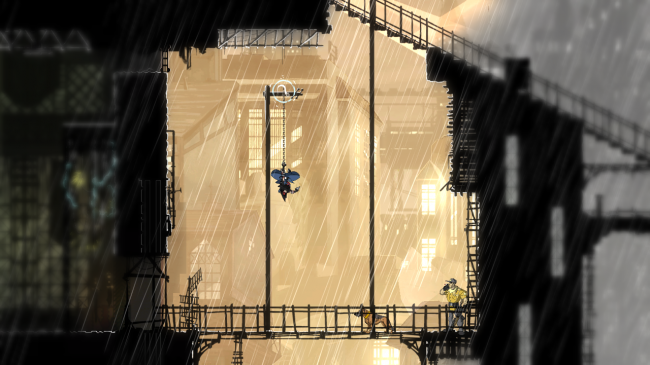 Note about PC controls: I’ve taken the PC version for a spin and the game is identical to the Xbox 360 release. That is to say: It’s wonderful. PC users can play the game with a controller or with mouse and keyboard. Surprisingly, nothing is really lost in that translation. Everything still works and anyone who is accustomed to playing platformers with a mouse and keyboard will master sneaking and slicing in no time. The game is out on Steam today.

Solid Snake? Forget him. Sam Fisher? Couldn’t sneak his way out of a wet paper bag. Tenchu? What’s a Tenchu?

We have a new, undisputed champion of the stealth-action genre. One that you’ll enjoy even if, like me, you have never been that satisfied with sneaking in games before.

I always default to sneaking through the shadows and stabbing enemies in their backs when that option is available. Quietly hunting down enemies without being seen often seems like it will offer the greatest amount of creativity, but even in games designed around stealth, the process almost invariably becomes bogged down in rote trial and error.

Mark of the Ninja deftly swings over that genre trap to make it a thrilling master class in stealth-action gameplay.

Empowering gameplay mechanics
Everything design decision from developer Klei put into Mark of the Ninja makes the player feel like a mystical shadow warrior. Klei presents all the information about the world visually. Enemy footsteps, frightened crows, and shattered lights all produce visible cones that show the player how far away an action’s sound travels. This bombardment of environmental awareness isn’t confusing or overwhelming. It also never feels like the game is trying to funnel you into a certain way of playing. It all just comes across as the Ninja’s superpowered “Spidey Sense” that allows the player to gather the necessary intel to execute a flawless assassination.

As the hero, players get a sword, endless bamboo darts, a distraction item, and an attack item. The ninja can also upgrade and unlock different offensive moves, items, and passive abilities. He can grapple-hook to predetermined points, climb on walls, hang from ceilings, hide in closets, and eventually [SPOILER ALERT] teleport behind enemies. 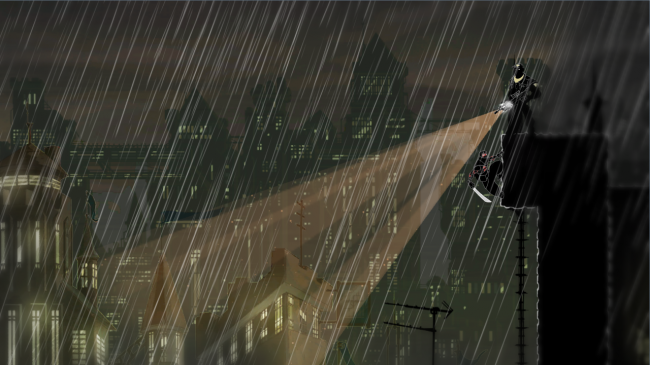 Using these tools, players can tackle every obstacle in the game in any number of ways.

In a single situation, I could:

Early in the game, you’ll experiment with these different modes of attack because it’s fun. Later, the game’s complexity requires that the player tap into a varied repertoire of solutions. I never fell into a routine where a good one-two combination of abilities and weapons would get me through the majority of a level. Each new standoff immediately sparked my imagination, and thanks to the visual information, I could methodically layout a completely original plan of attack.

Beautiful two-dimensional visuals
These days, 2D games are typically cashing in on nostalgia for older games. I like that, but I also appreciate the cleanly drawn, immaculately animated art style that Klei used in Shank and brought into Mark of the Ninja.

It definitely has a bit of a Genndy Tartakovsky (the creator of Samurai Jack) influence in the animation. The characters are expressive, and the action is deliberate and detailed. Klei certainly earned its Mature rating from the Entertainment Software Rating Board. Blood gushes out in every frame of an assassination, and the camera zooms in so you won’t miss an opportunity to be satisfied with your work.

The art also builds up an impressive sense of atmosphere.

Mark of the Ninja’s story is about a series of tattoo’s that are simultaneously killing the ninja and supplying him with new abilities. One of the side effects are hallucinations the the character sees throughout the later levels as crumbling structures in the background and crows that may not actually exist. This effect reaches its peak at the climax. The background [SPOILER ALERT] goes white, buildings begin transforming into birds and fly away. Pillars melt into enemies who die right in front of you.

It does a great job of illustrating the ninja’s psychosis while also showing off Klei’s animation skills.

The scoring system behaves weirdly and can distract from the game
Mark of the Ninja features a scoring system that awards points for successful stealth kills, hiding bodies, evading guards, and so on. Nearly everything action earns points. If a guard sounds an alarm, it instantly docks points from the score. It works well enough, but I exploited it in a few circumstances.

At first, getting an extra 200 points for hiding a dead body made perfect sense, but that concept breaks down when you know that no one is going to find the corpse even if you don’t hide it. The only reason to hide it, in that case, is to get the points. Even weirder is that I was still able to get a big 600-point score for throwing a dead body into a trap. To maximize my score, I would execute a stealth kill (400), hide the body (200), and then take that same body and throw it into some spikes (600).

That whole process feels detrimental to the spirit of Mark of the Ninja. I typically love trying to post a high score against my friends, but this is just distracting. Contorting the scoring system just get the maximum possible score makes the whole point system seem pointless. It’s not something that I expect everyone who plays the game may notice, and I don’t think it will bother many who do. For me, this is Mark of the Ninja’s one small stumble.

Like John “Hannibal” Smith of the A-Team, I love it when a plan comes together. Not only does Mark of the Ninja give me the opportunity to devise and execute cool and deadly plans, but the game itself is a supremely executed creative effort. Everything about it fits together flawlessly, and the result is one of my favorite games of the year so far.

Even if you’ve never liked a stealth game, you shouldn’t miss Mark of the Ninja. It redefines the silent assassin. Klei said it looked to games like Thief and Tenchu when building Ninja. But the next time someone tries to make a game about sneaking around and killing from cover, they will have to take a long, hard look at Mark of the Ninja.

The publisher provided GamesBeat with a downloadable code for the purposes of this review. Mark of the Ninja is available now on Xbox Live Arcade.