Mark Zuckerberg unveiled that Pac-Man Community is debuting on Facebook Gaming as one of the first games where audiences can play together while spectating.

Streamers and creators will be able to livestream their Pac-Man matches, and the audience can take a side and control the movement of Ghosts in the game, chasing after the Pac-Man characters as they gobble up dots. Genvid Technologies developed the game using its cloud-based technology platform in partnership with Bandai Namco.

On top of that, a feature called Play With Streamer will enable audience members to join in a game with a streamer as part of the show. Zuckerberg posted about the new game based on Bandai Namco’s 40-year-old Pac-Man franchise on his Facebook page.

“Pac-Man is coming to Facebook Gaming,” he wrote. “You’ll be able to play this classic game with friends, watch creators play, and build your own mazes. Gaming is a big part of the metaverse, and I’m looking forward to seeing games like this get more interactive and immersive.”

Zuckerberg recently changed Facebook’s name to Meta, in an homage to the company’s strategy to focus on making the science fiction of the metaverse into a reality. The metaverse is envisioned as the universe of virtual worlds that are all interconnected, like in novels such as Snow Crash and Ready Player One. 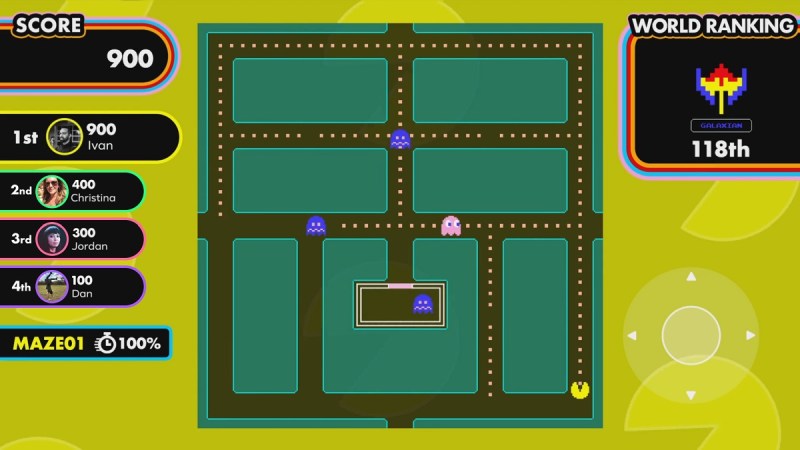 Above: Pac-Man Community lets players create their own mazes.

“We started working with Bandai Namco to create what we think is the most social and communal gaming Pac-Man ever,” said Jacob Navok, CEO of Genvid, in an interview with GamesBeat.

Zuckerberg also shared a video of him playing with a few other company execs. The game connects players, gaming video creators, viewers, and world builders together in fun new ways.

Facebook Gaming’s director of product management, Oliver Messenger, said in an interview with GamesBeat that Facebook already has a big presence on the social side of games, and it has made moves into hosting games through its cloud gaming experiences across mobile and the desktop. It has a platform for creators to livestream their gameplay and monetize their fans.

“We provide a place for people to connect around games and their shared interests of games, and we have more than 900 million people playing, watching, or connecting around games,” Messenger said. “But we feel that we can be far more unique and create more powerful and special experiences when we combine those pillars together.”

You can play solo or through real-time co-op multiplayer in groups up to four, working together to complete each maze while still competing against each other for the highest point total. In addition to Pac-Man Community’s built-in mazes, players can create their own levels and challenges through the Maze Creator tool for endless replayability.

Some of the tech has been battle-tested through Rival Peak, another audience-involvement game built by Genvid, Pipeworks Studios, and DJ2 Entertainment. In that Facebook Gaming experience, the audience voted on what a dozen different AI characters should do in a Survivor-style wilderness competition game. Rival Peak saw more than 100 million minutes of viewing in its 12-week season. 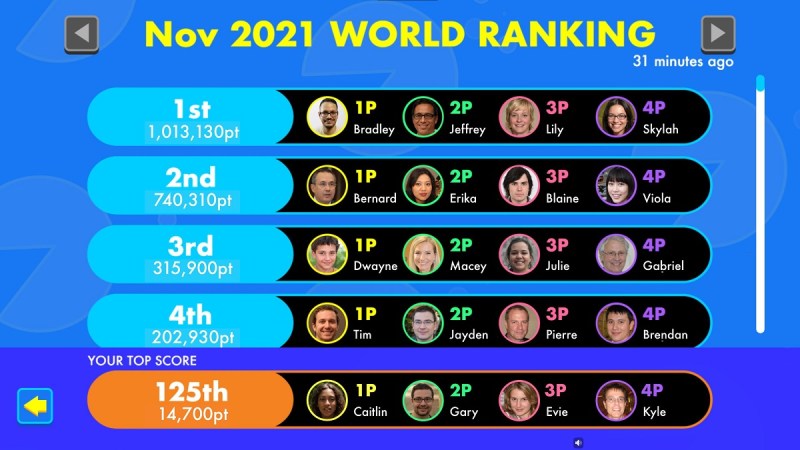 Above: You can compete against your friends in Pac-Man Community.

It’s a free Facebook Instant game that works instantly when you click a link on iPhone, Android, or the desktop. It has a new sound track recorded in Japan with a live band. It has localization in a variety of languages. Navok and Messenger showed me a live demo of the game in co-op mode. If you fail to clear a map, you can restart using the same group of friends.

Over time, Genvid is hoping to see a lot more user-generated Pac-Man maps via the Maze Creator tool. When you play, you can see each other’s faces on video, or you can hide the faces and just have a full screen game. You can also just play classic Pac-Man.

“These are probably the most intense Pac-Man games that you’re going to see,” Navok said. “This is just the foundation of many ambitions to come.” 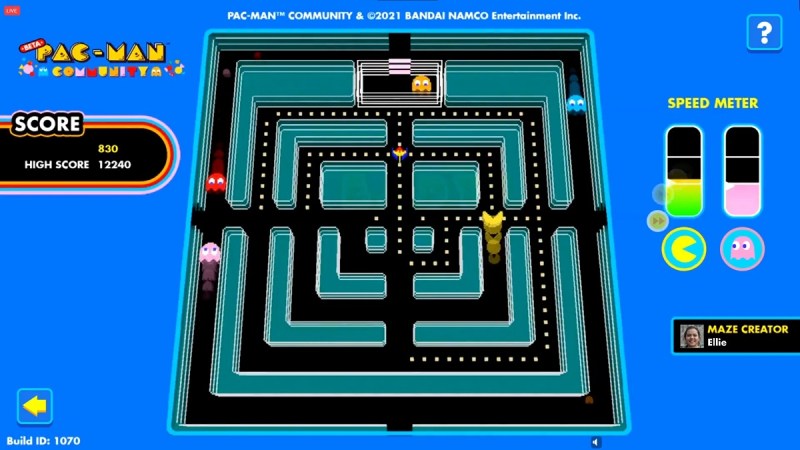 Through the new Play with Streamer feature, Facebook Gaming creators can invite their communities directly from their livestream to join them in-game to play or spectate. Player-created mazes will be featured inside the game daily, and community-oriented challenges plus mazes curated and cultivated by streamers’ communities are coming in the near future.

The game fits Facebook Gaming’s three pillars — Play, Watch, Connect. You can jump in and play with streamers live without needing to buy, download, or install the game — eliminating a lot of friction that often stops players from engaging with games.

“You will actually being able to watch a stream and then instantly jump in and play with them,” Messenger said.

Facebook debuted Play with Streamer with Worlds FRVR in August, and today it’s rolling it out for the Pac-Man Community game. 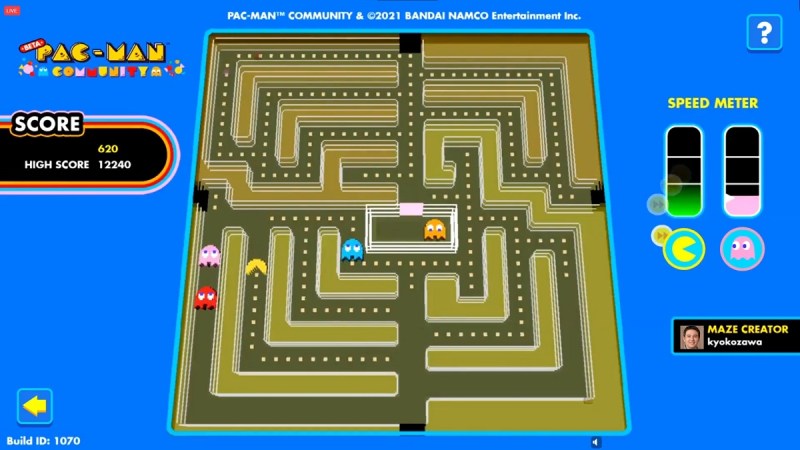 Above: Pac-Man Community is available in beta form on Facebook Gaming.

Facebook is also making live gaming video an active experience with the introduction of Facebook Interactives: new experiences layered on top of livestreams.

“We have Facebook Interactives to enable people to seamlessly engage and interact with that [gaming] content as they watch,” Messenger said. “It’s really blurring the lines between play and watch while being part of the community.”

The game also includes a Watch tab, powered by Facebook Interactives, which will feature Facebook Gaming creators streaming the game live. Watch mode turns mazes into 3D streams powered by Unreal Engine, where viewers can interact directly with the video player to pick a side and power up the AI Pac-Man or Ghosts in competition with each other.

You can think of it as a perpetual interactive Pac-Man watch party. Coming later in the beta, by interacting with a streamer’s session, viewers can work collectively toward global unlocks for the Maze Creator tool. When a streamer isn’t live, the watch tab will feature AI characters, just like an arcade machine that isn’t being played.

“We’ve got a lot of different ways to curate what we think is going to generate millions of different incredibly unique and original mazes,” Navok said. “If your friend creates one and you want to jump in, you can put in their maze number, which they can share with you.  We’re going to allow for streamers to curate and create their own playlists. And so you know, you’ll be able to go and find your favorite streamers, mazes, and they may share just their community mazes.”

You can see Facebook Interactives in action in Pac-Man Community’s Watch mode, where viewers of a 24/7 livestream pick a side and power up the AI Pac-Man or Ghosts in competition with each other. These features will soon unlock new community achievements. Facebook Gaming creators will be featured inside the interactive streams as they play.

In the future, these might include trivia questions, audience polls, and even playable games on-stream. Whether minigames, full games, or companion apps, Facebook hopes it will make watching live video a more immersive, social, and engaging experience for its viewers.

“If you think about how we get to massively scaled persistent 3D simulations, we have said to you that it’s going to take a long time for us to be able to do this on a truly mass scale,” Navok said. “For me, the max isn’t 100 people or 1,000 people. It’s millions of people. In a fully realized 3d simulation, it will take a long time as networks and rendering and communication lines are not set up for that today. And so the best path forward, the only way would you get truly mass scaled millions of people concurrently into one shared experience, is through these massive interactive live video events.”

The technology isn’t quite there to scale up a 3D metaverse today with complex AI simulations and more, but Navok said it’s good to learn today what works and what people want to create.

“The way we think about it as well is a bridge into the metaverse, right?,” Messenger said. “If you think about what the metaverse is, a sort of decentralized internet. The ability for people to go from 2D into 3D to sort of bring a community with, to find a community, to hop in and out of that community, to have experience that in VR are super rich, but then experiences to Jacob’s point on multiple devices outside of that sort of more immersive 3D experience, and that’s what I think we’re starting to see the realization of here. It’s that bridge into the metaverse, essentially, through playing watching and connecting with others based on community.”