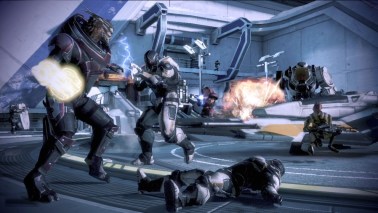 Game maker BioWare has added a four-player cooperative multiplayer mode to its Mass Effect 3 game, one of next year’s most anticipated titles, the company said today.

Mass Effect puts players in control of Commander Shepherd as he tries to fend off an ancient alien race called the Reapers. In the final installment of the trilogy, the Reapers have taken control of earth and Shepherd has to rally the forces of the galaxy to take back the planet and destroy the reapers. It’s an over-the-shoulder shooting game that features role-playing game elements, such as earning experience for completing objectives and becoming more powerful over time with better skills.

When entering the game, you can choose your race (among others, there are the massive Krogan and the powerful, psychic Asari races) and class, like a Sentinel or a Soldier, each of which has different abilities. You then face off against waves of enemies while trying to defend strategic locations across the galaxy.

“This is really the best place to start playing the Mass Effect series, this is the beginning, middle and end of the whole galactic war,” he said. “You’ll be able to take control of characters you have never been able to play before — you’ll have access to all the different classes and many of the races.”

Hudson said it made the most sense to add multiplayer to this title, which tells the story of an all-out galactic war at a huge scale.

Mass Effect 3 will come out March 6 next year.