Matterfall combines the twin-stick shooter with the action-platformer. It’s like Geometry Wars and Mega Man got their chocolate and peanut butter all mixed up. And it tastes pretty good!

This PlayStation 4 game comes from Housemarque, which also developed Resogun. That twin-stick shooter launched with the system in 2013. It was one of the console’s best early games, thanks to its voxel-based graphics (which had just about everything blowing up into thousands of blocks).

Matterfall has plenty of voxels, too, but its platforming elements make it a fuller experience. 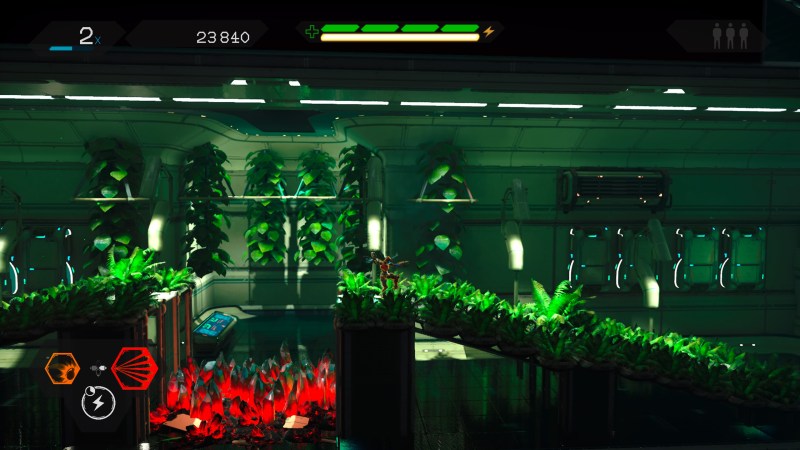 Above: Guess what? That red stuff is bad.

Just like with Resogun, the left analog stick moves you character, while the right one aims and shoots your gun. But you’re not a space ship in Matterfall. You’re just a person moving around a 2D world. The game uses some creative controls to make sure you can keep your thumbs on the sticks at all times, with other functions (like jumping or shooting special weapons) mapped to the shoulder buttons.

But the platforming isn’t standard. Along with your regular gun, you can also shoot out a beam. It doesn’t damage enemies, but it can activate certain platforms for a limited time. So you’ll often have to use this beam to turn these platforms on to help you reach new areas or block enemy projectiles.

You also have a dash move. You can dash through projectiles to make them disappear, but using it on enemies also freezes them and makes them take more damage from your guns. You’ll need to use this move a lot, since the game can throw a lot of bullets and enemies at you. You can also use the dash to go through some platforms, including those special ones you can manipulate.

So you’re often doing multiple things at once, like shooting, jumping, making platforms disappear, or dashing to nullify bullets or enemies. It’s hectic, and takes a bit to get used to the unorthodox controls, but it’s a lot of fun to master. 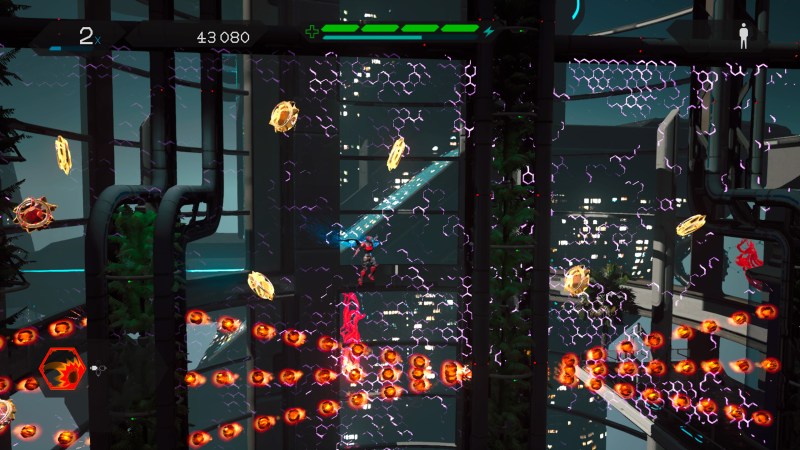 Above: That’s a lot of bullets.

Playing through Matterfall the first time will only take you a few hours, but the game has some arcade elements that could encourage high score seekers to go through levels multiple times. Similar to some twin-stick shooters, you get a score multiplier if you can kill a bunch of enemies in a row. The multiplier decreases every time you’re hit.

Now, if you don’t care about points and all that stuff, you can get through levels much quicker and with much less regard to your health. But if getting on the leaderboards is important for you, you’ll be using a more tactical style of play. 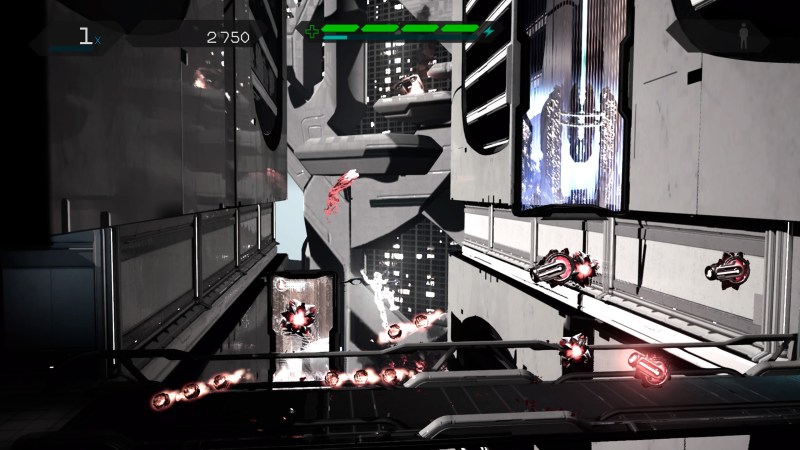 Above: Fight or flight?

As inventive as Matterfall’s gameplay is, its visual and audio elements are disappointingly typical. It has all the usual sci-fi robots and lasers tropes that you’ve probably seen a thousand times before in gaming, with few new ideas. The voxels and neon colors are the only thing that stand out.

Also, the game has a story … kind of. Matterfall only has two cutscenes. One comes at the end, the other is at the beginning. During the actual game, you don’t get so much as a line of text or a word of dialogue. It kind of makes the voiced scenes at the start and finish feel out of place. 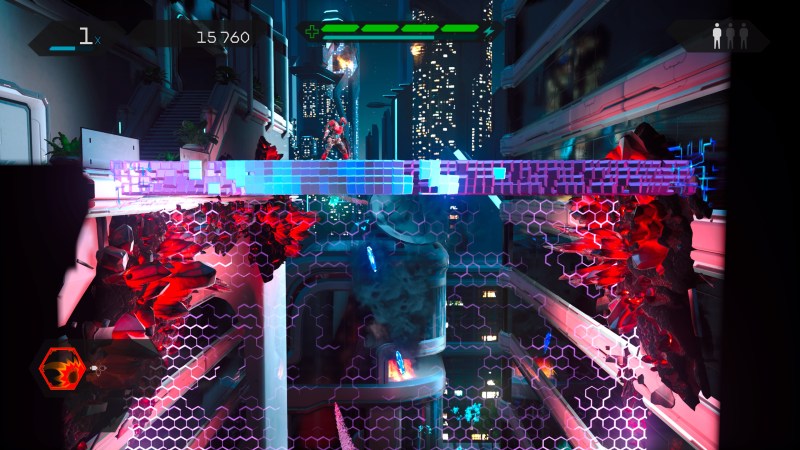 Above: You can dash through this platform.

Matterfall is a challenging and creative take on the twin-stick shooter. Even if it’s sci-fi setting is bland, the multitasking gameplay rarely offers a dull moment.

This is a strong followup to Resogun, and one of the PlayStation 4’s better digital exclusives.

Matterfall comes out on August 15 for PlayStation 4. The publisher provided us with a code for this review.