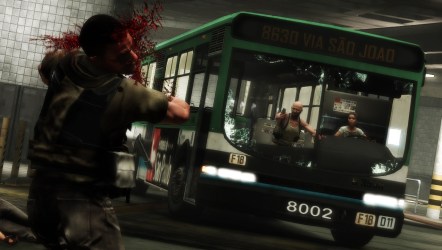 The run-and-gun Max Payne series hasn’t seen a new title in eight years but will finally return when Rockstar Games releases Max Payne 3 next year. It’s the company’s largest release slated for 2012 and follows the success of the company’s last two games, Red Dead Redemption and L.A. Noire. We’ve got a first look at it.

Rockstar, a division of Take-Two Interactive in New York, often sets the pace for innovation in traditional console video games, and this game could attract a larger audience than in the past because of the company’s growing reach beyond its traditional Grand Theft Auto fan base. That, in turn, will help Take-Two reach its financial goal of further broadening beyond Grand Theft Auto in its bid to become the maker of the highest-quality video games.

I got a chance to sit down and check out a quick demo of two levels of the game at Rockstar’s studio in New York, which feature the game’s titular character Payne escaping from New York mobsters and gunning down police officers in Sao Paulo, Brazil. It’s not your traditional shooter — your health doesn’t regenerate and you survive by eating pain killers to restore health and using “bullet time,” which slows down animations and lets you dodge bullets and get off a better shot at your enemies. There’s a cover system in the game that lets you duck behind walls and obstacles like in the Uncharted and Gears of War games, but using it would be missing the point of the game. You’re supposed to plow through enemies with little regard for your own personal safety.

Payne heads to Sao Paulo, Brazil. He serves as a bodyguard for the three brothers of the Bronco family. The wife of one of the brothers is kidnapped under Payne’s protection, and he finds himself wrapped up in a much larger conspiracy outside of a typical kidnapping. In the demo, Payne and company sneak into a nearby building and have to fight their way through local police to get to the exit. Payne jumps from ledge to ledge and grabs a crane, dropping down into a huge group of police officers and takes them all out in bullet time. You can blow up gas tanks and fork lifts and shoot the safety mechanisms on a wall, sending a bus up in the air falling onto a group of enemies. If it isn’t pinned down or nailed to the environment, chances are you can kill someone with it.

Each bullet in the game has its own set of physics rules, so the enemies move around dynamically as you are shooting them or hitting them. If you shoot them in the arm, the arm whips back from the force and leaves them crippled as they still try to take you down. When you get off an excellent kill shot or finish off a wave of enemies, the camera jumps over to the bullet and follows it as it hits an enemy — whether that’s in the shoulder or flying through their skull. It’s over-the-top violent and outlandish, but that’s what the Max Payne series has always been about.

“We’re talking no-holds-barred Hong Kong action style movies,” a spokesperson told me. “Guns are disposable and you’re going to rack up a huge body count — like a John Woo film or something.”

After that, Payne jumps on a bus while the friend drives through the parking lot. Payne has to kill police officers that are trying to shoot the bus and destroy it before they can get away. The whole scene is pretty similar to some of the super-dynamic environments that show up in triple-A blockbuster titles like the Uncharted series. Eventually, the driver crashes the bus into a building, and the demo abruptly comes to an end. They didn’t want to spoil anything, representatives said. 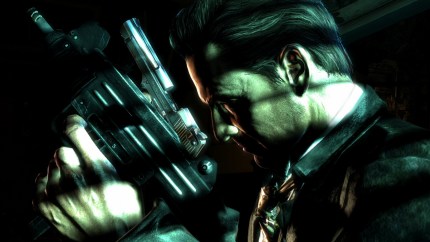 Despite all the crazy stunts, the game features some very realistic environmental collision and character movements. Payne visibly twists his torso when flying through the air to turn around and covers his head if he’s about to jump into a pack of trash cans. When climbing through the environment, the game highlights the tiny parts of Payne’s movements, like flattening his palm against a dumpster to support his weight or peeling back a chain link fence to help a friend crawl through.

Max Payne 3 picks up a few years after the second one. Payne is a little older and a little weary and still in a state of depression and self-loathing after what happened at the end of the second game. At this point, he’s an alcoholic addicted to pain killers, so he leaves the force and looks into jobs at private security firms.

“People are like, ‘oh it’s been like eight years since the last Max Payne,’ yeah it’s been a long time but internally it has never gone away,” a Rockstar spokesperson told VentureBeat. “We’ve always had the intention of bringing it back.”

Rockstar doesn’t typically tie itself to the same rigorous release schedule as supergiants like Activision-Blizzard and Electronic Arts. The company releases around one game a new year, and that game is typically in development for a long time before it finally comes out. The company doesn’t really succumb to the same kind of pressures that major publishers face, a spokesperson told VentureBeat. 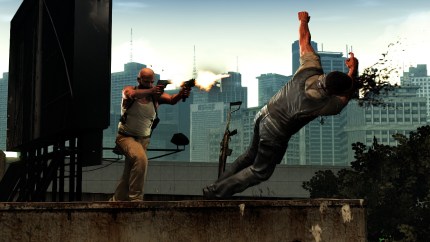 Rockstar released LA Noire, a detective-style open world game centered around a Los Angeles detective, earlier this year. The year before that Rockstar released Red Dead Redemption, an open-world shooter set in the wild west. Both games were critically acclaimed, with LA Noire picking up an 89 out of 100 across 77 reviews and Red Dead Redemption earning a score of 95 out of 100 across 96 reviews.

“Rockstar is a company that very much makes games that everyone thinks are cool and will want to play,” he said. “Our mantra has always been, when it’s ready, it will be ready.”

Rockstar has always focused on having a compelling storyline with each of its games, and Max Payne 3 is no exception. The story is told through graphic novel-style cut scenes (cinematic videos) and lots of internal monologue. Payne is hardly a silent, stoic protagonist — he’s human and he clearly has his share of problems. The game has its own share of surreal moments, like when a crazy guy sits in front of a crowd of bad guys and tells them “they will be cleansed in fire” before blowing himself up. Those kinds of moments have come to define the Max Payne series, and they’ll definitely show up in the latest installment, a spokesperson said.

Along with the run-and-gun single player story, Rockstar plans on releasing a multiplayer mode for the game — though the company wouldn’t give us any details about it. But a spokesperson said that it would feature some “completely new” things that other online games, like Call of Duty, did not highlight. But the company doesn’t expect it to really compete with something like Modern Warfare 3 because the Call of Duty franchise is “basically on its own planet,” representatives said.