Max Strzelecki was born with no arms, but this hasn’t stopped him from becoming a game programmer.

Strzelecki codes entirely with his feet, using a regular mouse and keyboard. He’s currently working on a magical action-platformer called Warlocks that’s tantalizingly close to hitting its $25,000 Kickstarter goal with less than 48 hours left to run.

Speaking via Skype on Monday, Strzelecki’s passion for coding was immediately clear. What was even more obvious, though, was that he just gets on with his life and hates being thought of as different. The idea that people think his ability to code is “cool” leaves Strzelecki distinctly unmoved. For him, it’s just normal.

“A lot of people seem to have this approach when they’re thinking about it,” he said. “‘You’re so cool, you’re doing this, I couldn’t do it.’ You wouldn’t be able to do it because you haven’t been practicing with your feet for 20 years. I have.” 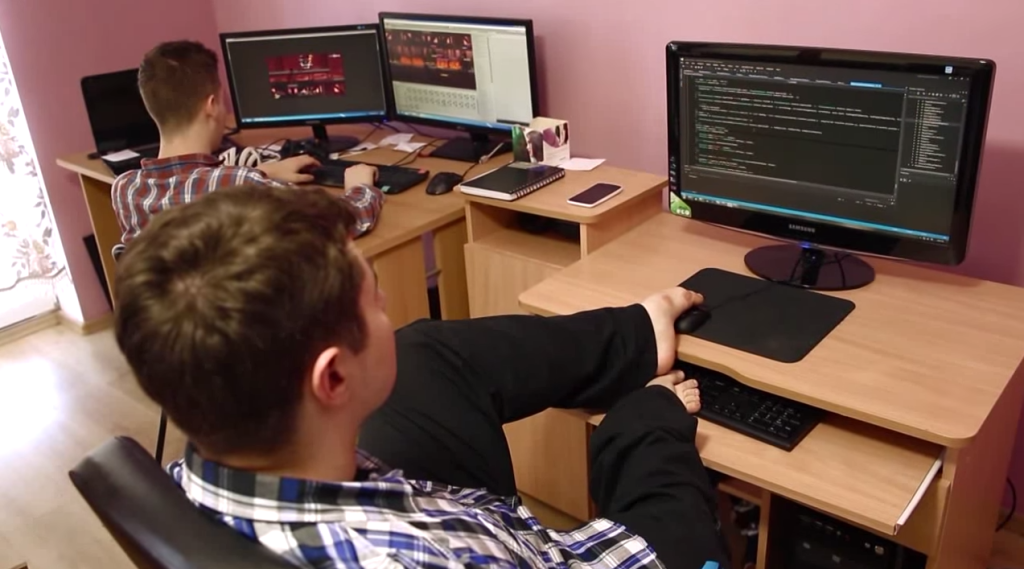 Above: Max Strzelecki codes with his feet, using a regular mouse and keyboard.

Strzelecki is the sole programmer on Warlocks, a game inspired by the indie sci-fi sensation Risk of Rain, winner of Best Student Game at 2014’s Independent Games Festival.

Warlocks itself is an 8-bit explosion of magical powers, fighting, and creeping, shadowy enemies, built very much with the local and online multiplayer crowd in mind. It will still have a strong story for players who prefer to go it alone, though. “We started with versus mode, which kind of felt like a cool little mage fighting game, and then we added story and a campaign,” said Strzelecki. “We’re working on that as we speak.”

Based in the north of Poland, “by the sea,” the 21-year-old Strzelecki signed up to the Warlocks project when his friend, game designer Dushan Chaciej, asked for his help.

“Warlocks is kind of like a sequel to his small game that he did for a game jam,” said Strzelecki. “He wanted more people in his project to make it work somehow, and that’s when he contacted me. He offered me the spot and I took it and we started working together.” 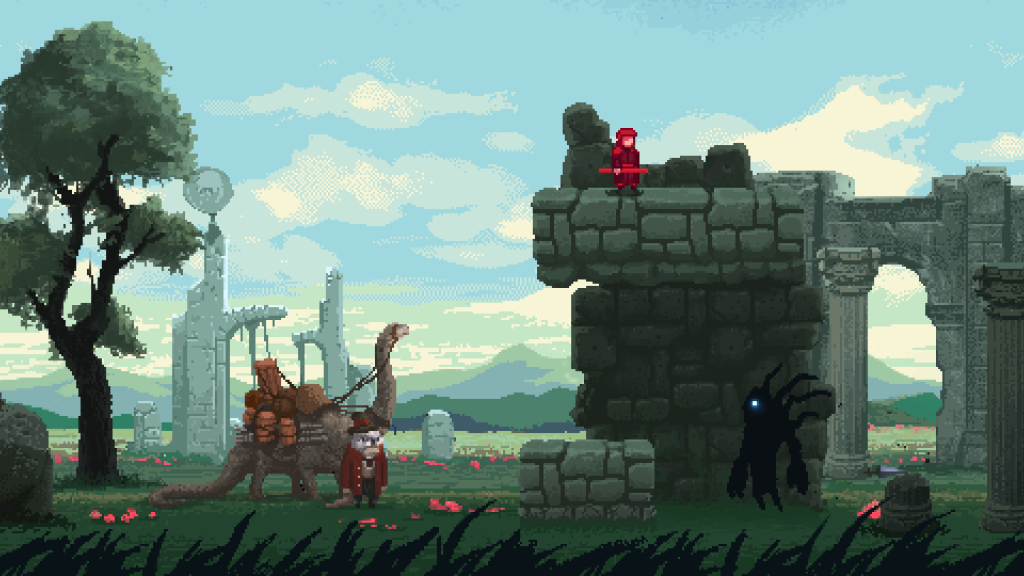 Above: Warlocks comes from independent Polish developer One More Level.

The stress of Kickstarter

The One More Level team has five people working to make Warlocks a reality, and they’re finding the stress of their first Kickstarter campaign pretty tough.

“The first week is like friends and family,” he said. “Everybody’s messaging you saying, ‘My god, what a cool project, I’m going to back you up.’”

But then, as so often happens with Kickstarter, things got quieter. “You know, we just refresh the thing, and it doesn’t really change a lot,“ laughed Strzelecki. “It’s been slow, but it’s been steady.”

Strzelecki first got into coding at 10, inspired by a family friend who was a professional programmer. Since then, most of what he’s learnt he’s taught himself. He is studying computer science at college, but it’s clear that he’s largely driven himself to the point he’s at now.

“I picked it up when I was 10 or something and I started working real hard to get that knowledge up,” he told me. “It was difficult at first; it took me a while to get there. I had many different little solo projects — some were finished, some were not. But Warlocks is the first major one.”

As for school, Strzelecki says that his disability didn’t really affect him. Neither has it even been fully explained. “I think they tried to look for an answer,” he said, “but there was really nothing that came on the radar.”

“Its a situation that I’ve been born with,” he said, “so I’ve kind of learnt to adapt to it and use my strengths to the fullest. It’s never been a problem — I just use normal equipment. Aside from the disability, I’m a pretty normal guy.” Above: Max raises his chair so that he can access his keyboard and mouse better.

I asked Strzelecki if he gamed himself, and he jokingly told me that he’s a “PC master-race guy.”

“I’m an avid Dota 2 player,” he said. “I play Dota 2 a lot, and recently, I’ve picked up Counter-Strike: Global Offensive. And [while] it just seems like I started playing yesterday, I’ve got $200 [of in-game currency] already in just three weeks, so I’ve been playing that a lot.”

Again, Strzelecki uses a standard mouse and keyboard to play. He doesn’t need or use any special equipment. I suggested that he must have particularly adept toes to play a fast-paced first-person shooter like Counter Strike, though. “I don’t know,” he laughed, “I don’t compare them.”

As the only programmer working on Warlocks, Strzelecki is responsible for porting the game to Wii U, the stretch goal that has already been hit, and potentially to PlayStation 4 and Xbox One as well. The thought of this doesn’t worry him at all.

“We’re working on this project with the Unity engine,” he told me. “It’s not really that big of a deal.”

He says that the biggest problem he’ll face is making sure everything works properly for each platform and that the platform owners, especially Sony, are happy: “Whether this button works in the menu, or whether there’s a proper prompt happening on the screen.” 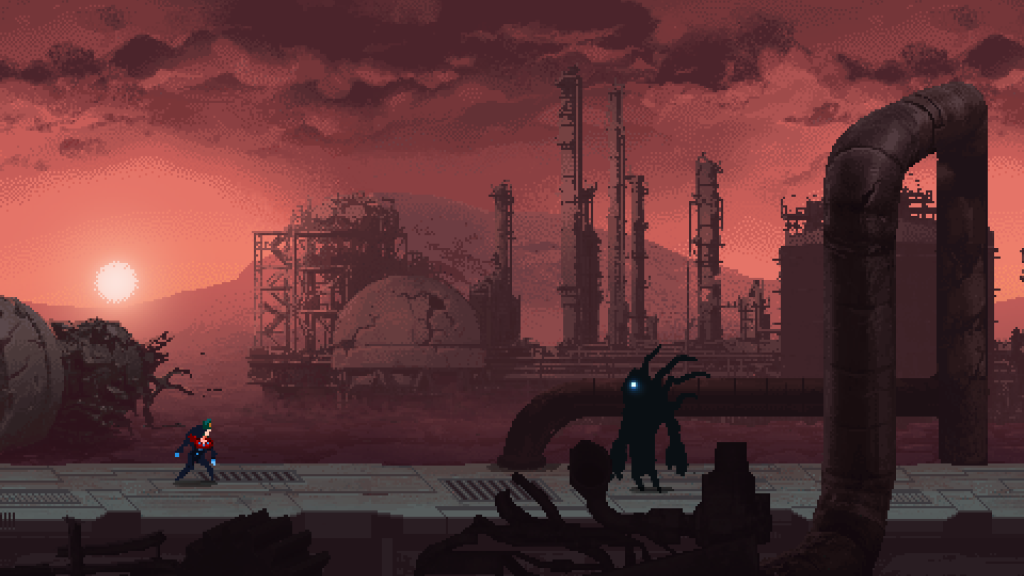 And, whether its Kickstarter campaign succeeds or not, Strzelecki says that Warlocks will go ahead: “Maybe not in the format that we wanted with all the features, but it’s still going to be made.”

That so many backers have put down their money for Warlocks clearly means a great deal to Strzelecki and the rest of the team. “We’ve got over $18,000 and almost 700 backers, so I’m really glad we did this and, even if we fail, it was a great experience,” he said.

As for Strzelecki’s own future beyond Warlocks, his disability will certainly not restrain his ambitions.

I asked if he thought it might potentially be a barrier to getting work in a larger development studio in Poland. “No, I don’t think so,” he said. “If that would be a problem to a developer, I wouldn’t like to work with such a developer in the first place.”