Today’s most popular game engines from Unity Technologies and Epic Games (Unreal Engine) were built a while ago. And that’s why Sinjin Bain, the chief executive of MaxPlay, believes his new game engine can win over the hearts and minds of game developers.

The startup spun out of Technicolor and it has raised $17 million to date, said Bain, in an interview with GamesBeat. I’m interviewing Bain on stage about the company today at the GamesBeat 2015 conference in San Francisco.

But Bain believes that game engines created more than a decade ago haven’t kept pace with change. His company is using scalable enterprise software technologies, allowing two or more game designers in different locations to work on the same file at the same time. I watched a demo of this working, where one developer manipulated the location of some rocks in a landscape and another played around with the speed of tanks moving through it. The changes they made appeared quickly, and were even pushed to a viewer on an iPad. That allows for distributed teams to work together more efficiently, Bain said.

“The work flows we see today were created in the 1980s,” Bain said.

Whatever its benefits, Maxplay faces stiff competition. Epic’s Unreal game engine works across a whole series of platforms, from mobile to the high-end PC, and Unity says that its game engine was used by 2 million people in the past month. The momentum behind those platforms — not counting others such as Cocos2D — is pretty intimidating.

But Bain said that gaming has evolved dramatically over the past 15 years with digital distribution, new business models, distributed development, and an explosion of hardware platforms that have dramatically changed game design and gameplay experiences. He says the platforms and processes used to create games have remained relatively static. Any changes have been “bolted on” to the sides of pre-existing platforms, he said.

“Bottomline, we need to help game developers find fun faster, and then be able to continuously optimize that fun for their users,” said Bain.

Above: MaxPlay lets game makers work on the same scene at the same time.

Bain added, “Game development is a team sport, yet today’s devs are still working in a linear and siloed manner, which stifles productivity and dramatically inhibits collaboration and creativity.”

“We are focused on enabling real-time, cross-discipline collaboration so a team can build on each other’s skillsets which we know will unlock developer’s creativity,” said Bain. “We are taking what currently takes 10-20 minutes per iteration change into real-time — that’s thousands of man hours saved in each development cycle.”

MaxPlay’s team has worked on games that have generated $20 billion over the last decade.

“For 100 years Technicolor has empowered storytellers to bring their unique vision to life. We believe that games are another form of storytelling, and MaxPlay provides content creators with the best technology platform to take their craft to the next level,” said Vince Pizzica, senior executive vice president for corporate development and strategy at Technicolor, in a statement. “We share a common goal, which is to provide amazing user experiences through the application of new technologies.”

Chris Carvalho, MaxPlay Board member and former COO of Kabam added, “MaxPlay is a game-changing technology venture. Using modern innovative technologies both proprietary and existing, MaxPlay is the only SaaS enterprise game development solution with a database-driven cloud architecture. This radical shift away from traditional siloed game-development practices gives developers the opportunity to create and operate games more effectively and cost-efficiently than ever before.” 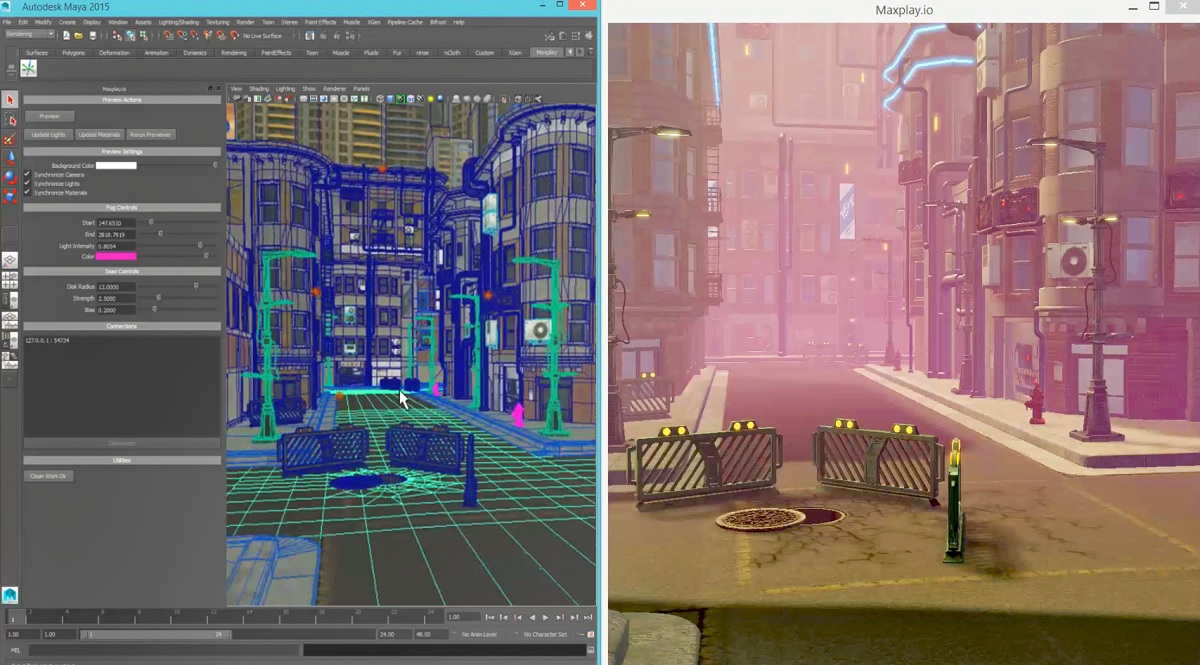 Above: The MaxPlay Game Development Suite lets you preview scenes made with third-party tools (such as Maya) in real-time.