When MaxPlay debuted its new game engine for the cloud era in October, it said it would disrupt the development business. And today, it is announcing the second part of its plan to overhaul the industry with MaxCore, which can dramatically improve the performance of games or virtual reality apps.

San Francisco-based MaxPlay uses modern cloud technology and learnings from web-based enterprise software to bring the traditional standalone game engine up to speed. Game engines are vital to the industry’s ecosystem, as they enable developers to speed up the process of making products and iterate on prototypes. They allow designers to reuse technologies that have been invented before and make development more accessible to a wider group of creators. With MaxPlay, multiple developers can share the same file and work on it simultaneously. It’s like “Google docs for game developers.”

While MaxPlay’s game development suite benefits studios, the MaxCore tech benefits gamers. The company said has figured out a way to get code to take advantage of all of the cores, or processing hardware, that are available to it. It does the complicated job of spreading the code to run across all of the available cores in real time. This leads to efficient processing, big improvements in performance, and frame rates that are up to 400 percent better in games.

The MaxCore technology is one way that MaxPlay hopes to take on the most popular game engines from Unity Technologies and Epic Games (Unreal Engine), which were both built a while ago. The company gained a new competitor as Amazon announced it would give away its new Lumberyard game engine for free, including source code. You can host Lumberyard games on servers on Amazon Web Services, or your own hardware that you own and operate.

Chief executive Sinjin Bain described the MaxCore technology to me last fall. He called it an “ncore” technology, since MaxPlay’s game engine code could run smoothly regardless of the number of cores being used in a gaming system. 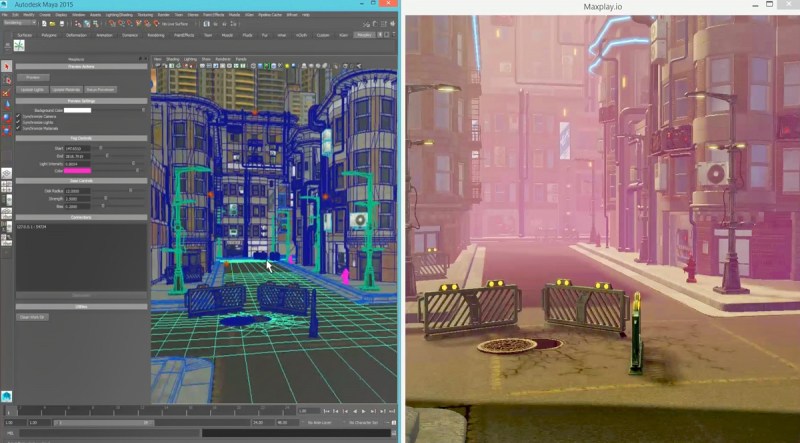 “Virtual reality is ushering in an era of innovation and amazing new experiences, but it also introduces a variety of new challenges and opportunities that require more powerful and innovative software development solutions,” said Bain in a statement. “Our goal is to continue to create technologies, like MaxCore, that are built for today and tomorrow’s gaming and AR/VR development needs. By providing a flexible and extensible high performance platform, MaxPlay unlocks new creative opportunities for all developers.”

The startup spun out of Technicolor, and it has raised $17 million to date, said Bain in an interview with GamesBeat. I’m interviewing Bain onstage about the company today at the GamesBeat 2015 conference in San Francisco.

Bain believes that game engines created more than a decade ago haven’t kept pace with change. His company is using scalable enterprise software technologies, allowing two or more game designers in different locations to work on the same file at the same time. I watched a demo of this, where one developer manipulated the location of some rocks in a landscape and another played around with the speed of tanks moving through it. The changes they made appeared quickly, and the engine pushed to a viewer on an iPad. That allows for distributed teams to work together more efficiently, Bain said.

Whatever its benefits, Maxplay faces stiff competition. Epic’s Unreal game engine works across a whole series of platforms, from mobile to the high-end PC, and Unity says that its game engine was used by two million people in the past month. The momentum behind those platforms — not counting others such as Cocos2D and new free Amazon product — is pretty intimidating.

But Bain said last fall that gaming has evolved dramatically over the past 15 years with digital distribution, new business models, distributed development, and an explosion of hardware platforms that have dramatically changed game design and gameplay experiences. He says the platforms and processes used to create games have remained relatively static. Any changes have been “bolted on” to the sides of pre-existing platforms, he said.

MaxPlay was founded to define and engineer a new software platform to build and operate high-quality games in today’s increasingly complex, global, multiplatform environment. MaxCore is one of those technologies.

MaxCore, meanwhile, is a scalable, data parallel computing architecture and advanced rendering system for multicore devices, which include every gamer PC these days. The company said MaxCore dramatically improves game performance, which is critical for AR/VR applications where maximum processor utilization is critical. MaxCore is designed to utilize all of the available cores giving developers more flexibility and control over their game software. MaxCore’s advanced rendering system works in even the most complex  scenes, the company said. In particular, Light Indexed Deferred (LID) rendering allows for thousands of light sources per single object giving artists tremendous flexibility to create incredibly realistic worlds.

“With MaxPlay’s MaxCore game developers can now take advantage of every CPU core without compromise,” said Kevin Normann, president and chief technology officer at Midnight Studios, in a statement. “The performance gains are phenomenal.”

MaxPlay has seen 400 percent frame rate increases with MaxCore when scaling from two to six core machines in benchmark testing. No other game development engine on the market is designed to scale with the inherent power of multi-core hardware, the company said.

“MaxCore and LID rendering is just what the doctor ordered for VR developers,” said Ryan Peterson, CEO of Finger Food Studios, in a statement. “This combined approach helps developers get the most out of multi-core CPUs.”

“MaxPlay’s engine leverages all of the CPU cores on a device whether it’s a phone, PC or game console, unlike the functional threading model popular in today’s game engines,” said Matt Shaw, MaxPlay’s CTO, in a statement. “This additional power is critical for developers who want to create high quality experiences that demand peak performance, especially for AR/VR where every frame-per-second counts.”