MediaSpike specializes in doing product-placement ads that look like they’re part of a game world. Now it’s doing the same thing for virtual reality, so that the emerging platform isn’t plagued by banner ads and other intrusive advertising.

The in-game virtual reality ads are part of the “native advertising” movement to make ads more welcome and less intrusive. As the brands start to get excited about virtual reality as a game and media platform, MediaSpike wants to head off the urge to stick lame banner ads all over it. So it has adapted its in-game product placement platform to handle ads in virtual reality.

I’ve seen the ad platform company’s virtual reality demo using an Oculus Rift virtual reality headset. In the demo, you can see movie posters on walls in a 3D city. You can see a giant drive-in movie screen running video ads. And you can ride around in a blimp with product placements such as a can of Pepsi or a poster plastered on the side of a blimp.

Blake Commagere, chief executive of MediaSpike in Mountain View, Calif., said in an interview with GamesBeat that his team got excited about VR with the rise of Oculus and its $2 billion acquisition by Facebook.

“We’re trying to undo the damage done by the banner ad industries,” Commagere said. “Once VR gets consumer attention, brands will want presence there. Unchecked, it’s going to be crummy banners in this amazing 3D experience. We adapted our platform to Oculus to head off the mistakes of the past.”

John McCrea, chief marketing officer at MediaSpike, said in an interview that mainstream VR will create the highest-value digital advertising inventory. Ads in this immersive platform can be extremely effective, he said.

“It was so much more compelling to see the outdoor movie screen towering above you,” McCrea said.

When I viewed the demo with an Oculus headset, it was very absorbing. You could maneuver through a city in a car and stop in front of a giant screen that was akin to a drive-in movie. The video of the Despicable Me minions covered all of my field of view. Then I stepped aboard a blimp and floated around the city. The sign on the side of the blimp was an advertisement, and I could see billboards below with ads embedded in them. 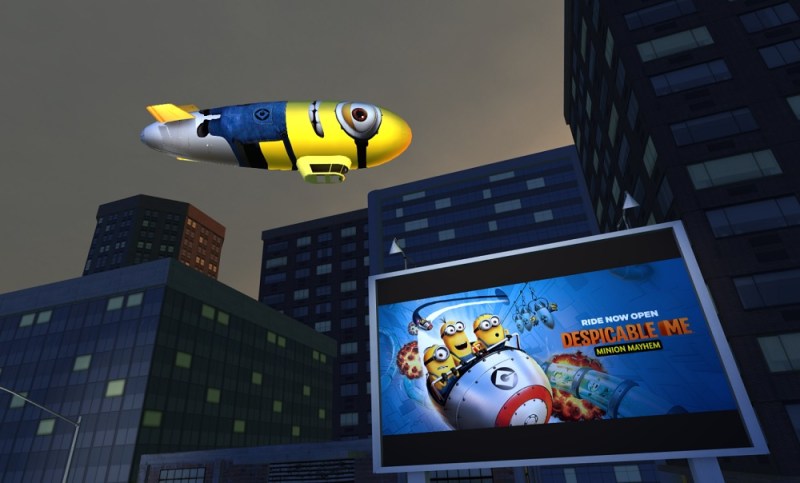 Above: MediaSpike’s 3D blimp ad and its outdoor movie screen.

Commagere played a joke on me by saying I should reach out to grab the can of Pepsi in front of me in the blimp cockpit. I reached out, and he placed a cold can of Pepsi in my hand. It was a good joke, but it brought home the point of advertising in virtual reality.

“We want developers to be thinking about advertising as a revenue channel that makes their game better and more realistic,” Commagere said. “It’s not just a necessary evil. They don’t have to settle for banner ads. They can do something that is really cool for the user experience.”

By integrating with Oculus, it will be easy to create embedded ads within virtual reality apps. And the ads can be dynamic. That means they can be changed within a VR game over time. So you can change the billboards that the player sees inside the app. MediaSpike is releasing a new VR and augmented reality compatible version of its Unity software development kit.

“You can take this to the logical extreme, replacing any object with a branded item,” Commagere said.

MediaSpike will show the demo at the SVVR Holiday Party on the evening of Dec. 11 at the Computer History Museum in Mountain View. Oculus VR won’t be released for a while, but Commagere said now is the time to get ready for it.

MediaSpike has 10 employees, and it has raised $5.2 million to date. The company also has numerous contractors creating art. 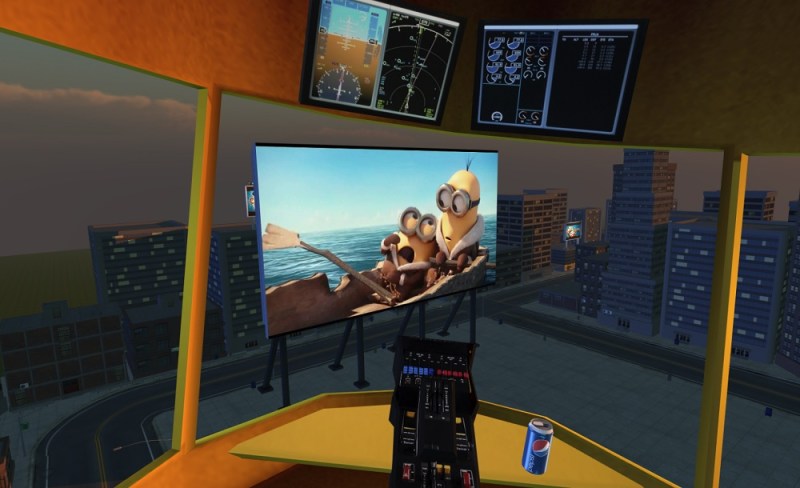 Above: MediaSpike view from inside a 3D blimp in virtual reality.