In its ongoing push into brands and mobile games, Zynga is releasing its Looney Tunes Dash level-based runner today on Android and iOS devices. It’s a beloved cartoon franchise in a game category that has one of the broadest possible reaches, and it means that Looney Tunes characters like Bugs Bunny and Daffy Duck will finally get a marquee game in the mobile space.

Zynga licensed the Looney Tunes cartoon character brand from Warner Bros. Interactive Entertainment so it could stand out from the crowd of a million competitors in the mobile app stores. But it also tried hard to bring its own breed of innovation to the genre, said John vanSuchtelen, the general manager of Looney Tunes Dash, in an interview with GamesBeat. In these endless-runner games, you swipe in a direction to jump or move to the side, and you try to outrun your pursuer until you inevitably die.

“There are millions of fans that love these games in the runner category,” he said. “But they’re really looking for something fresh. I think about how I can feel like I’m winning. The world seems familiar, but it is also fresh.” 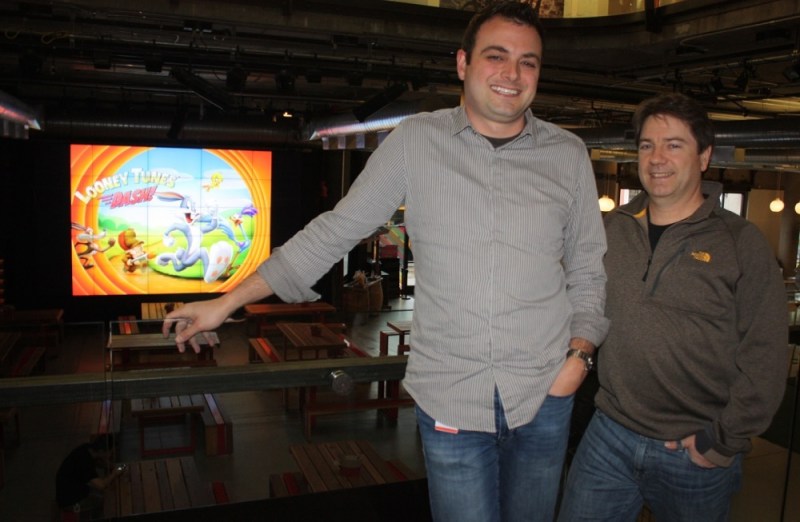 Above: John vanSuchtelen and Michael Waite of Zynga

That thinking informed Zynga’s approach to the design, which it co-created with Eat Sleep Play, the developer that made its Stampede Run endless runner. Each race is limited to just a couple of minutes, and the 3D running environment is separated into distinct levels. When you complete a level, you get a reward and then progress up the ladder to the next level. The game will have 90 levels, and the first character you start with is Bugs Bunny. You have to unlock levels as well as characters and abilities. You earn coins along the way and gain power-ups that unleash a special ability. In one run, I found a Gossamer character that made me invincible for a time. 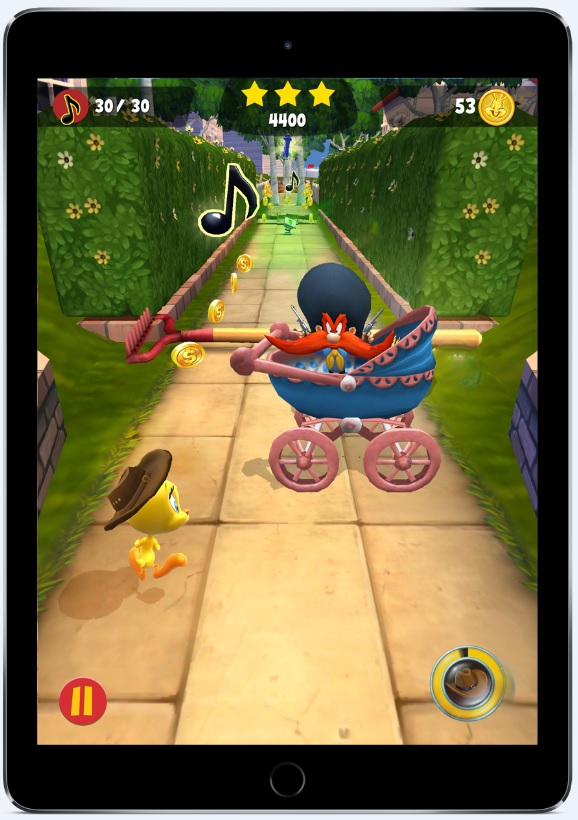 Each level starts with a cartoon cinematic, like Bugs Bunny plugging Elmer Fudd’s shotgun and then running off. You can choose to run down an easy path or a more difficult path. And the levels have areas where you can make vertical or horizontal moves. Zynga has tried to be creative with each level.

“Brand alone isn’t enough,” said Michael Waite, the creative director of Looney Tunes Dash, in an interview with GamesBeat. “You have to build a game that matters.”

When you think about it, Looney Toons cartoons are the perfect candidates for endless runners. Wile E. Coyote is never going to catch the Road Runner, but he’s always going to try and fail spectacularly. Elmer Fudd endlessly hunts Bugs Bunny, and Sylvester the Cat constantly pursues Tweety Bird. The cartoons are full of iconic chase scenes that Zynga has been able to turn into running scenes in its game. There are special cameo appearances by Marvin the Martian, Porky Pig, and Taz.

“When we talked to Warners Bros., this running game became so obvious,” vanSuchtelen said. “These cartoons are frenetic and unpredictable, and so is this kind of game.”

The world of Looney Tunes springs to life with the different settings, which are straight out of the landscapes of the cartoons, like the desert and canyons of Road Runner. While Bugs Bunny hops around a lot, Road Runner is all about extreme speed. The game has original musical scores and songs, as well as settings that are based on classic Looney Tunes episodes. It has voice-over work from Jeff Bergman, the modern-day voice actor for Bugs Bunny, Daffy Duck, Elmer Fudd, and Yosemite Sam.

The game could get a broad audience because the Looney Tunes characters are cross-generational. Zynga’s about to find out just how timeless characters like Bugs Bunny, Road Runner, Yosemite Sam, and Tweety Bird really are. The game is part of Zynga’s multi-year agreement with Warner Bros. Interactive Entertainment to license the brand for mobile.

Brands have become big deals in all sorts of games lately.

“It’s a hyper-competitive market,” said vanSuchtelen. “It continues to increase. What excited us about this was the opportunity to cut through a lot of noise with the brand.” 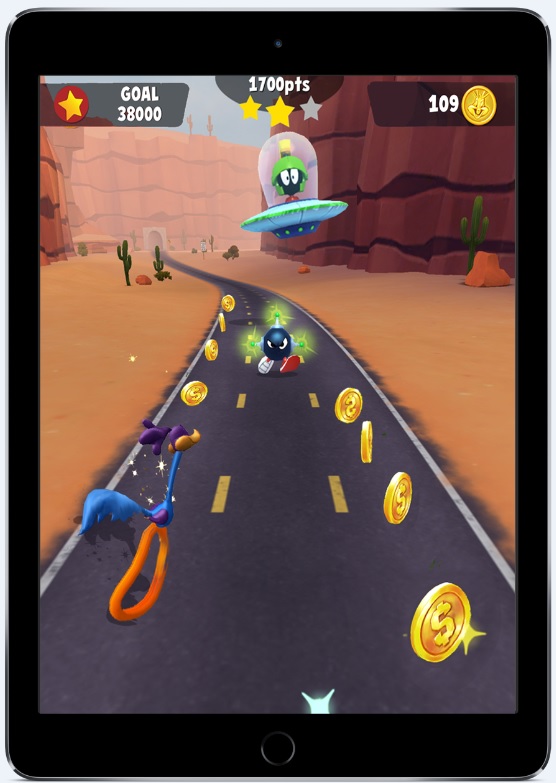