Antoni didn’t disclose how much money he’d made in total from Diablo III. One Reddit user, going by the name WishboneTheDog, seemed more than happy to do so in public, though, starting an “Ask Me (Almost) Anything” thread a year ago titled: “I’ve made $10,000+ legitimately from the D3 market. AMAA.”

WishboneTheDog posted pictures of their PayPal transactions and auction history [below] as proof of his trading endeavors. Their time spent with the game was way in excess of what Antoni and Krizan invested, averaging around eight hours a day during Diablo III’s first two months and as many as 14 hours on occasion. 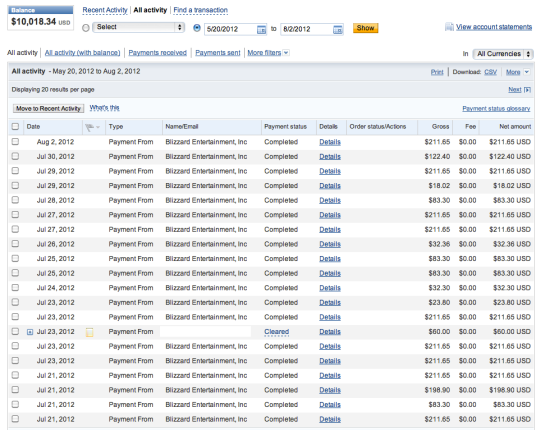 Above: Redditor WishboneTheDog shared details of their earnings from the real-money auction house.

“My playtime now has dropped off because of the slowing economy and lots of [real-life] responsibilities,” WishboneTheDog said at the time. “Some days in the past week, I have only logged to repost auctions and do a quick 20-minute scan. I’m back to playing other games now, too.”

WishboneTheDog defended the relevance of in-game currencies as a genuine economy on their Reddit thread — and the right for players to pay-to-win in an auction house setting.

“When there is collective demand from real people for an item within a game market, the same value is created as anything else in the world, and you can put a number on it,” WishboneTheDog said. “That number can be different depending on the currency you are using to represent the value. You need a lot more Yen than Euros to represent the same value. The same goes for [in-game] gold.

“What people don’t realize is that currencies are only a numerical representation of value. As soon as there is a collective demand for goods, both virtual and ‘real,’ value is created. Humans developed currencies to represent this value in a tangible way, and to make the exchange of these goods more liquid.”

WishboneTheDog argued that those who play within such economies create the value of the in-game currency when they take time to accumulate it, with an item’s rarity contributing to its value equal to the amount of time a person would have to play to statistically obtain it. “This is very similar to any currency and wage labor,” they said. 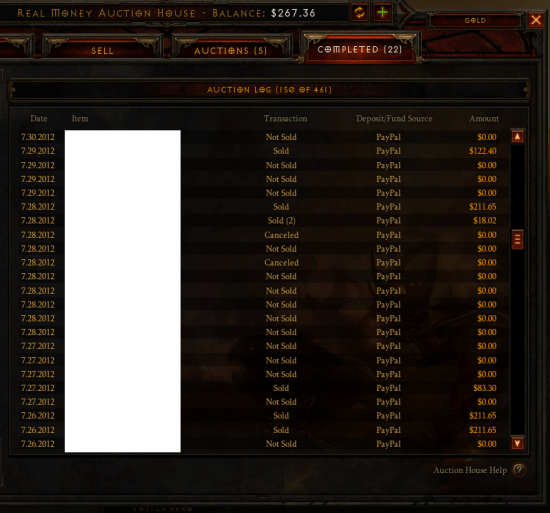 Above: WishboneTheDog sold multiple items for over $200 on the auction house.

In terms of hours invested in the auction house, a Diablo III player named Tou — also known as Diablo Billionaire — may top the leaderboard.

In a YouTube interview with MMO personality Marcus Eikenberry, Tou revealed that he had made around $5,000 during the auction house’s first month. He also shared the bags under his eyes from the hours he’d invested in buying and selling online.

Tou revealed that as a full-time Diablo III player and trader, life wasn’t all a game. “This stuff is actually harder than a real job,” he said. “You have to do work – you have to read.“ He told Eikenberry that he was putting in over 80 hours a week and that his girlfriend had broken up with him as a result of his work. “I spend about 10 to 14 hours a day,” he said.

I tried to catch up with Tou to find out if he’d managed to maintain his big-money start to the real money auction house, but I couldn’t track him down.

Given that he had a background of selling memberships for the popular MMO Runescape, though, claiming to have made $25,000 in one month, I wouldn’t be surprised if he is still making real money from the gaming scene, even if it’s not from Diablo III.

You can check out the full interview with Tou below.

Diablo III director Jay Wilson admitted last year that the real money auction house was “the wrong solution” to the problems Blizzard was trying to solve. “It’s not good for a game like Diablo. It doesn’t feel good to get items for money: It feels good to get items by killing monsters,” he said.

The upcoming release of Diablo III expansion Reaper of Souls on March 25 created an opportune window to close the real money and gold auction houses, according to Blizzard cofounder and president, Mike Morhaime.

“We saw the expansion as an opportunity to make some changes,” he told Polygon. “We all sat down, we talked a lot with the developers, especially the game director Josh Mosquiera, and just tried to look at ‘if we could do anything we wanted, what is the right thing to do for the game?’

“We all agreed that the game would be better without the auction houses.”

So, is the closure of the auction house the end for making money on Diablo III?

“Trading really is going to die,” Antoni told me. “Even though you can trade items among players, you’ve got to have another class that can use the same primary stat as you, because that’s what’s dropping for you. If they’re a Monk and you’re a [Demon] Hunter — great, that’s going to work out. If they’re a Demon Hunter and you’re a Witch Doctor, it’s not going to work. And you only have a two-hour window, and they have to be playing in your game. So its silly. It’s not going to be feasible.”

As for Antoni, he says he’s considering turning his Diablo III website over to a “free site with a bunch of farming videos.”

Despite that he will no longer be earning from the game, Antoni is positive about Diablo III’s move away from a real money economy. With the updates and expansion, he says, “The game is going to be about grinding with your friends and gathering loot, and once you have what you need you’re going to find the materials you need to craft.”