Mega Man 11 is now out for PlayStation 4, Xbox One, Switch, and PC. For fans of the series like me, this is a happy time. After a hiatus of over eight years, the Blue Bomber is back in an original title, and his new adventure is great.

But Mega Man games are hard, and that’s especially true if you’re newer to the series or if you’re jump-and-shoot skills have gotten a bit rusty. Mega Man 11 has multiple difficulty options that can help ease you into the experience, but I also have some tips that can help prepare you for the long adventure to defeat Dr. Wily.

Use the Speed Gear without fear

The Double Gear system is the main feature that makes Mega Man 11 feel different from its predecessor. One button makes your attacks stronger with the Power Gear. Another button slows time via the Speed Gear. You can only have one activated at a time, and using them fills up an overheat meter. If you overheat, you won’t be able to use either Gear for some time.

The Power Gear can be good in some circumstances, but the Speed Gear is the one you’ll want to use often. Slowing down time not only makes it easier to dodge enemies and attacks, but it also helps you make difficult jumps.

And even though the Power Gear is the one that’s designed to help you in combat, the Speed Gear can also boost your damage output. Even though everything else is moving slower, your weapons still fire at a normal speed. So you get off a lot more hits than normal when you slow down time.

Get comfortable using the Speed Gear a lot. Learn how long you can use it before it overheats, and recognize situations where it can help you dodge damage or kill an enemy quickly. 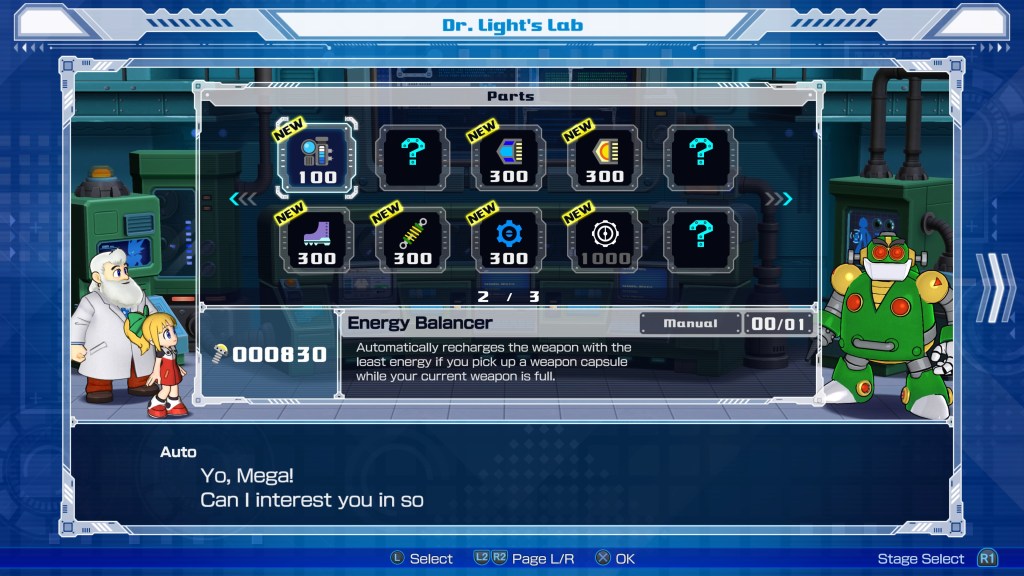 Go to the bolt store often

The in-game store is so helpful that it’s almost broken. You can use bolts that drop from enemies to buy upgrades that do things like increase the size of your normal buster attacks or minimize how much you’re knocked back when you take a hit. You can also buy extra lives and E-tanks (which refill your health).

All of these items are cheap. You’ll be able to afford every upgrade after doing a handful of levels. You’ll then be able use the rest of your bolts to keep your extra lives and E-tanks at max. This will make it much easier to beat levels and bosses. Really, it’s hard to come across a boss that’s so difficult that even refilling your health eight or so times isn’t enough to beat them. 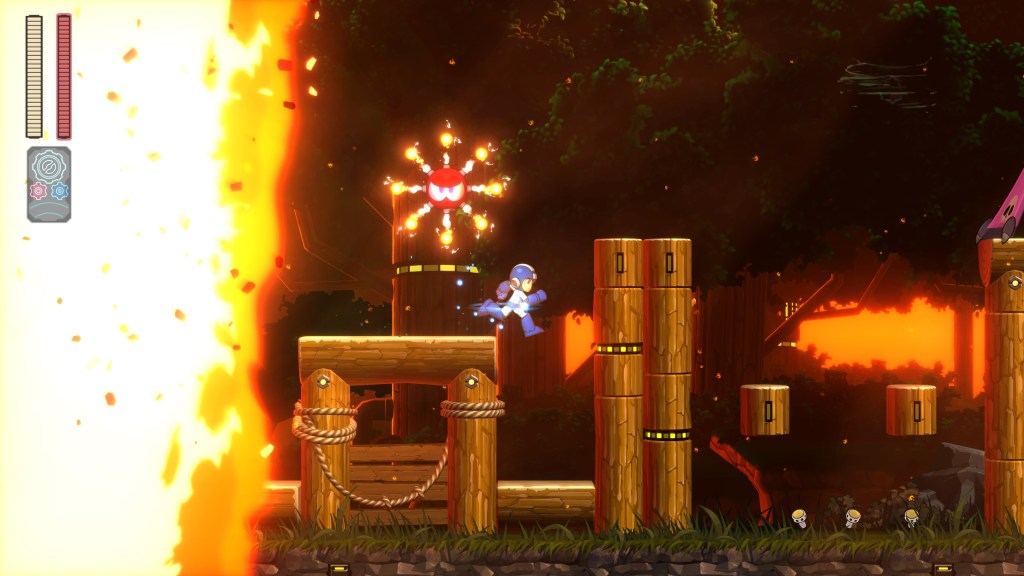 Above: This might be a time you’ll want to just go really fast.

A lot of those upgrades you can buy are great, but some of them are only useful in certain situations. You can equip and unequip these upgrades from the same menu you use to select weapons and items like E-tanks.

One item augments the Speed Gear so that everything but Mega Man goes into slow-mo. Use this sparingly. This can help you in some sections when literal speed is necessary, but those areas are few. It’s usually more helpful to have Mega Man himself also slow down, since it makes it easier maneuver him around obstacles and enemy fire.

Another upgrade makes it so that Mega Man is always charging his Mega Buster. This feels awkward. I’d rather manually charge up the Buster myself. 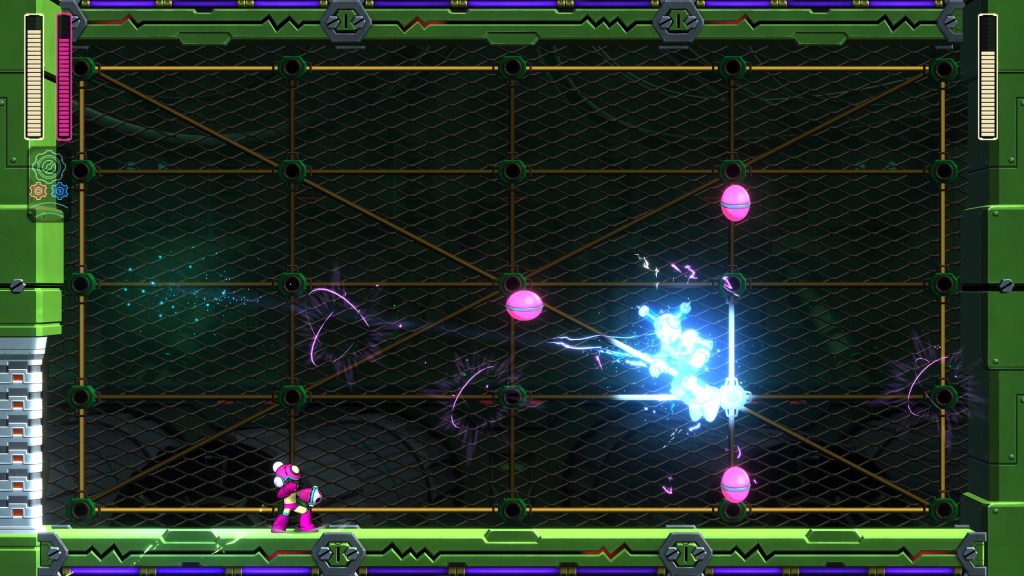 Above: Bouncing balls are great weapons, so don’t just use them on bosses.

Don’t be afraid to use special weapons

Just like in past games, every weapon (aside from the Mega Buster) has its own ammo. Enemies can drop energy containers that restore ammo. From the start, you can grab an item from the store that makes it so that these energy drops will automatically replenish whichever weapon is lowest on ammo. But after you buy that upgrade, you can then get a new item that just makes these energy containers refill all of your weapons.

That, coupled with how cheap W-tanks are at the bolt store (just like how E-tanks refill health, W-tanks refill weapon energy), makes it much harder to run out of ammo in Mega Man 11 than in other titles in the franchise. Now, I’m not saying that you should just shoot these weapons with wild abandon. But feel free to use them when the situation calls for it. If an enemy is in an awkward place that your normal Buster can’t reach, use one of your special weapons. Don’t just save them for boss fights. 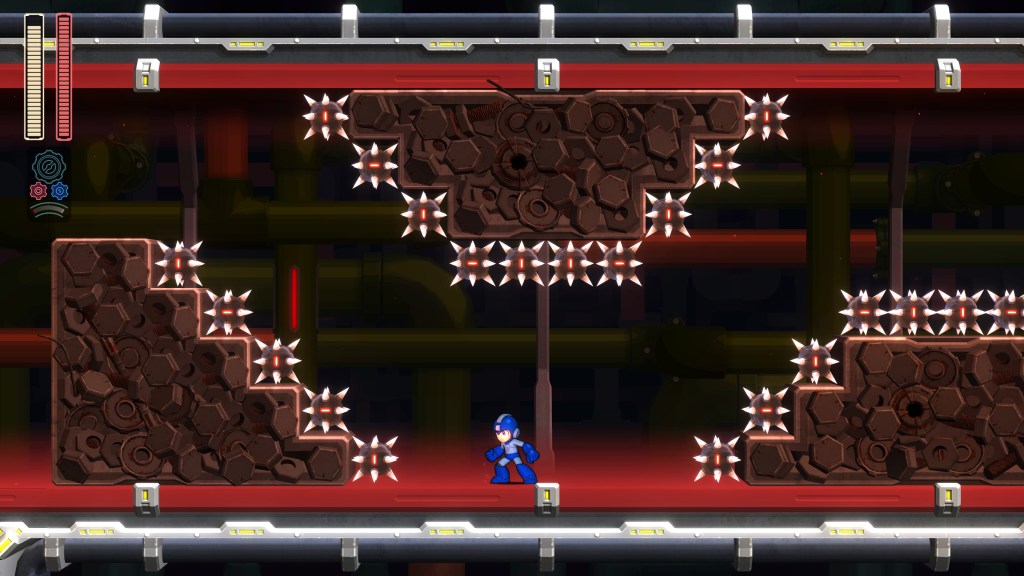 Mega Man 11 can be hard. That’s part of the series’ appeal. Some levels and bosses can feel like impossible challenges, but you’ll grow in skill the more you play. The satisfaction comes from blasting through roadblocks that once seemed insurmountable.

But you will still fail, especially if you’re not used to playing these games. Being good at Mega Man requires becoming comfortable with the controls and learning how to aim your weapons so you can take out enemies before they hurt you. Getting the feel for it can take some time, and you’ll suffer a lot of deaths in the process. Even if you’re familiar with Mega Man, some of these new stages are tough. It will take you a few tries to learn how to navigate them.

Accept that you will die. Treat each failure as a learning experience. It can be frustrating to die at a boss and run out of lives, meaning that you’ll have to restart the stage at the very beginning. But you’ll have an easier time going back through those levels now that you have some experience behind you.

And if you’re still feeling more frustrated than entertained, just buy a bunch of extra lives and E-tanks and bulldoze your way through the level.