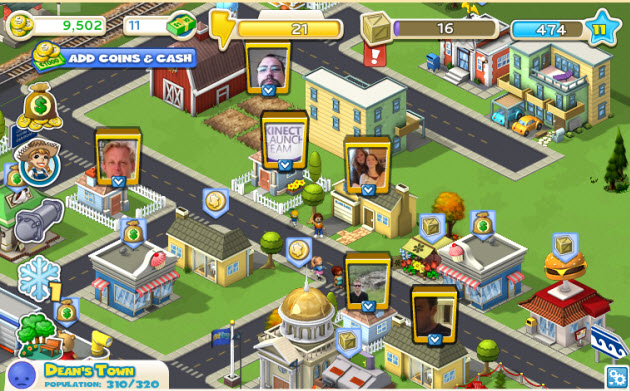 In just 22 days, Zynga‘s CityVille has eclipsed FarmVille as the world’s biggest game.

Today, CityVille added an astounding 6.9 users to end the day at 61.7 million monthly active users, compared with 56.8 million for FarmVille, according to stat collector AppData. Before today, FarmVille, also made by Zynga, was the biggest social game on Facebook, and it also happened to be the biggest game on any platform in terms of the sheer volume of users.

Now the challenge will be to make money from all of those users. If Zynga hangs on to them, it stands a chance of becoming a far bigger player in social games than it already is.

When CityVille took off shortly after its launch on Dec. 2, it was clear that its growth path was going to break all records. We knew this would happen, but it’s still pretty astounding. It’s going to be a pretty Merry Christmas for Zynga. Zynga’s traffic on Facebook has now soared to 261.6 million monthly active users, which is probably near its all-time peak. In November, Zynga had around 198 million monthly active users.

Zynga actually hit its peak in the spring, about the time when Facebook cracked down on game communications that were perceived as spam-like. That meant that it was harder to make games take off in a viral way, without spending money on advertising. Zynga’s growth plummeted and it hasn’t replaced those lost users until now.

The turnaround is remarkable and shows what can happen when you have a good game. CityVille is a city simulation like SimCity, but far simpler and more social. For instance, you can open a chain of stores and operate them as franchises in your friends’ towns. Mark Skaggs, head of the team that built the game, told us in an interview that the concept was to create a game that felt like you were playing it in real time.

The game also benefits from Zynga’s usual advertising on Facebook and its ability to cross-promote the game to its other Facebook users. The questions now are, will users will stick around and will they will spend money? Zynga’s games are free-to-play, where users can play for free and spend real money on virtual goods such as tractors in FarmVille.

Founded in 2007, Zynga has become one of the largest gaming companies, with more than 1,300 employees. Legendary investor John Doerr of Kleiner Perkins Caufield & Byers said Zynga was easily the best investment that his firm has ever made. The social networking game maker is already the largest app developer on Facebook. And some recent valuations show that Zynga is actually valued above $5 billion, larger than Electronic Arts, one of the largest video game publishers in the world.

Zynga is trying to build up its user numbers by expanding to new platforms such as mobile games in Japan. It is also expanding its social games to non-Facebook web sites and translating its games into other languages. The company has been buying about a company a month to get more talented game developers. But the No. 1 thing it has to do to keep growing is commission new games like CityVille.