MetaArcade is launching its narrative horror game Cthulhu Chronicles on the App Store for iOS today, because we don’t have enough horror in our daily lives.

The Seattle-based MetaArcade made Cthulhu Chronicles in partnership with Chaosium, which created the popular tabletop role-playing game Call of Cthulhu 37 years ago in 1981. The game distills the essence of the award-winning role-playing system into a story-driven, intuitive experience designed for mobile gamers, with individual stories forming a larger campaign set in 1920s New England.

First appearing in the horror fiction of H.P. Lovecraft and frequently referenced in popular culture, Cthulhu and other Elder Gods are deities of monstrous appearance whose mere presence can drive onlookers insane. Imprisoned in an underwater city, Cthulhu is a source of constant, unidentified anxiety for all of humankind while his followers seek to bring about his return.

In Cthulhu Chronicles, players can play as various archetypal investigator characters such as a policewoman or private detective. Players pursue missions involving crazy cults, sinister creatures, and horrors from beyond space. The immersive narrative is accompanied by images and an ambient soundtrack by Cthulhu contributors Chad Fifer, Cryo Chamber, Graham Plowman, and others.

“Our mission is to bring tabletop RPG adventures to mobile into graphically appealing, bite size chunks you can pick up and play, and it’s been exciting converting Chaosium’s Call of Cthulhu to our Adventure Creator format for Cthulhu Chronicles,” said David Reid, CEO of MetaArcade, in a statement. “We’ve created new and remastered adventures with multiple branching storylines that create a satisfying balance of horror and adventure through the campaign arc.”

Cthulhu Chronicles is designed for both interactive fiction fans and Cthulhu veterans looking for a way to play between sessions. 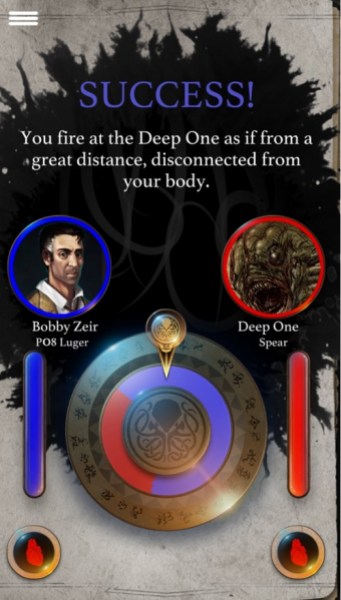 Unlike many RPGs, the focus isn’t on building up a character through combat. Instead, players choose an appropriate investigator for the mission at hand, with each investigator having their own strengths and weaknesses as well as individual storylines.

At key decision points, players will make choices, as each story has multiple endings and numerous clues to uncover. Their skills, athleticism, appearance, and intelligence, will help them overcome enemies and accomplish special feats, but chance will play a role as well, indicated by a spinning wheel of fate. A failure can be a mere setback, or cause death or insanity.

“Cthulhu Chronicles brings the terror and fun of Call of Cthulhu to life on your mobile device,” said Mike Mason, Call of Cthulhu line editor at Chaosium, in a statement. “It emulates the tabletop experience, giving you choices to make, each one taking your investigator down different paths with differing conclusions. Mystery, intrigue, horror, and madness await your investigator, who can gain insights and lose sanity while charting his or her way through the scenarios.”

At launch, the game includes five scenarios created with MetaArcade’s proprietary Adventure Creator tool, with four more coming soon. Together, these scenarios comprise the first Cthulhu Chronicles campaign, Investigations in Lovecraft Country. Additional campaigns are planned after launch, and fans will be able to create their own Cthulhu Chronicles stories in the future.

Launched in 2016, MetaArcade is building a platform to allow players to create and publish their own interactive fiction experiences — with no technical experience required — for free. Greg Stafford founded Chaosium in 1975, and gaming legend Sandy Petersen created Call of Cthulhu in 1981.