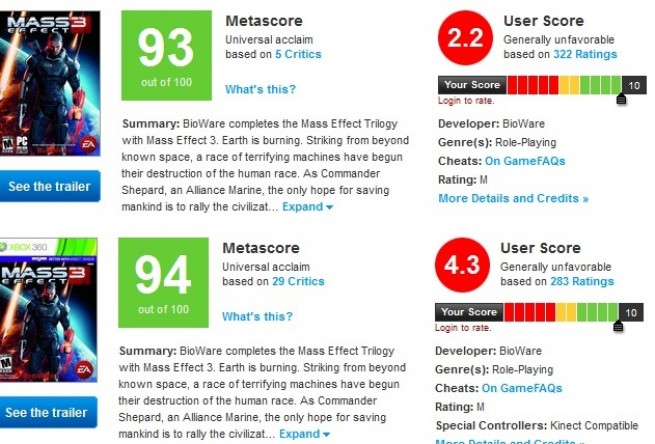 And the Mass Effect 3 drama just keeps on going! The game has been out for less than 24 hours and already thousands of Metacritic users have besieged the game with low scores. Metacritic has taken notice, and has started purging the system of any reviews deemed to violate the site’s terms of service.

…with the massive influx of user reviews today, there has been a substantial amount of abuse reported by our users which we’ve reviewed/moderated, and we’ll continue to do so. Reviews can violate our terms of use in a variety of ways: offensive remarks to other users, spam/advertising, insults, flaming, use of profanity, among other activity. Acceptable use of a CBS Interactive site is described more formally here.

In general, we want our users to play the game and then write a review that will hopefully help give guidance to the rest of the community as to whether the game is of high quality and is worth playing. If a user’s review is devoid of criticism and is simply disruptive, offensive material, we’ll remove it.

Interestingly, even with the violating entries removed, there are still hundreds of negative reviews attached to each version of the game (Xbox 360, PlayStation 3, and Windows PC). Reading through them reveals mostly coherent and familiar complaints towards the game, such as the infamous day one DLC, poor writing, technical issues, and various aspects of the multiplayer mode, as well as the inclusion of multiplayer altogether.

GamesBeat will continue to update this story with any interesting developments, and you can expect our own review shortly.

Update: After posting this article I noticed a lot of users on Reddit, Twitter, and various other venues suggesting Mass Effect 3 was receiving special treatment. They claimed other games–including last year’s Modern Warfare 3–suffered similar assaults from unfair user reviews, but allege that Metacritic took no action.

In reply, Doyle told us, “Our process is identical for all products – games, movies, tv shows, and albums. If abuse is reported, we moderate consistently.”