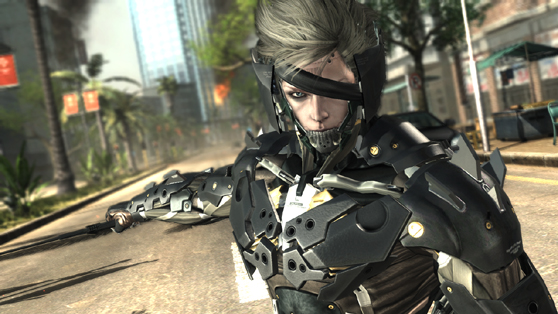 It’s a feat worthy of Solid Snake that Metal Gear Rising: Revengeance should be so wildly inventive and yet so wildly conventional. It brings to mind Star Wars: The Force Unleashed, which features a tremendously powerful physics engine but was ultimately let down by an overall lack of good ideas and terrible scenario design (like the battle with the Star Destroyer).

You can distill both to fairly simple conceit. In The Force Unleashed, the goal was to make it fun to fling around Stormtroopers with the Force. In Metal Gear Rising, according to Kojima Productions producer Yuji Korekado, the core concept is that “when you cut something, it feels good.”

The concept stems from a scene from Metal Gear Solid 4. Once vilified for as a puerile Solid Snake-wannabe, Metal Gear Solid 2’s Raiden officially graduated into the Metal Gear universe as a member in full standing when he massacred a host of Geckkos — biomechanical infantry assault vehicles — with a katana.

“For Raiden, we wanted to move forward because of that action scene he had,” Korekado says. “We feel he can step up and become [as important as Solid Snake]. Snake is a wonderful character for the franchise, and we want Raiden to be that for us as well.”

Being a cyborg, Raiden brings a few special qualities into any action role. He’s incredibly fast, so much so that he can enter a bullet time-like mode in which he can slice foes at his leisure. As with the first time you lifted a Stormtrooper with the Force and watched him grapple for dear life with his buddy, it’s these moments that stand out most in the Metal Gear Rising demo. Enter sword mode and the game automatically draws a line like a butcher’s diagram down the center of an enemy. One flick of the right stick and you slice the hapless opponent in two. Then into quarters. Then into eighths.

Raiden’s primary foes in the demo are regular soldiers and Gekkos. A typical sequence sees Raiden entering a large open area full of patrolling foes, none of whom are aware of his presence. Such moments are reminiscent of the classic Metal Gear games that Rising is based on, but with one important difference. Where Snake sneaks to avoid unnecessary fights, Raiden is only really interested in avoiding crowds of enemies. As a ninja cyborg, the only way he will ever be overwhelmed is if the soldiers and Gekkos can gang up on him.

If the purpose of the demo is to communicate the joy of slicing up enemies, it succeeds admirably. The action has the fingerprints of Platinum, the action studio that jumped in to save Metal Gear Rising when the project was all but dead, all over it. And being a demo, we’re probably not seeing the full extent of what Platinum’s work. Korekado hints as much when he says, “Something I learned working with Platinum is the potential of the Metal Gear world. One thing about Platinum is that their unique specialties have allowed them to come up with many scenarios that Kojima Productions cannot.” 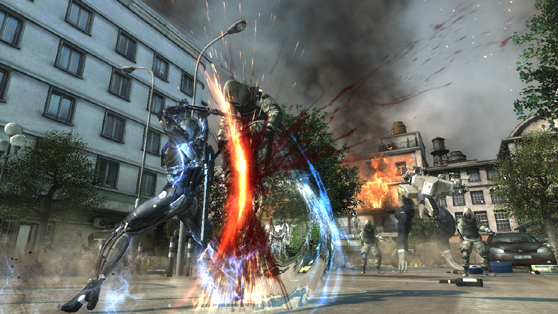 The hope is that Platinum will indeed make good on some of the game’s franchise, because as solid as it is right now, Metal Gear Rising feels like it’s in danger of being a single-note action game. Nowhere is that more evident than in the demo’s final encounter–a strangely conventional battle with a panther-like cyborg.

In the early going, it’s easy for the beast’s speed to overwhelm and terrify you. Sword mode isn’t helpful, and simply attacking it only gets Raiden hurt. Instead, the main strategy is simply to be patient and block. Eventually, this stuns the pantherbot, and Raiden can get his licks in. After taking some damage, the panther leaps away and summons some minions. It’s the kind of fight that brings back the good old days of the NES — not exactly the image one would associate with a cutting-edge action game like Metal Gear Rising: Revengeance.

One wonders if Raiden’s abilities are actually a hindrance in this instance. Being a supercyborg, is he actually so strong that boss battles have to neuter his all-powerful sword mode in some way? Korekado dismisses such concerns: “Of course, Raiden being a cyborg, he has many superpowers and is incredibly strong. In the end, this is a battle between cyborgs and a battle between superpowers. That has allowed us to kind of go wild with our brainstorm. It’s funny because each stage and boss provides something different. The stages, the battles, the bosses … they all have something you won’t expect. For that reason, [Raiden’s abilities] have never been a restriction for us.”

The demo gives some reasons to be optimistic when Korekado refers to the team’s capability to “go wild.” With games like Bayonetta in its catalog, Platinum has established itself as one of the best action studios in the business. The Metal Gear franchise is known for having some of the best boss battles in the history of the medium. With so much talent on the job, one imagines that Metal Gear Rising will be anything but conventional.

But Metal Gear Rising has had a troubled development to this point, and Platinum has had to work hard to get the project to a point where it can actually be released. With so many issues, it wouldn’t be surprising to see Metal Gear’s creativity suffer. One would hope that the panther battle an exception to the franchise’s past quality.

At this point, Metal Gear Rising has a lot of potential as an action game. The talent behind it is considerable. But Platinum and Kojima Productions may want to look to Star Wars: The Force Unleashed as a warning that great graphics and great intentions mean little in a game with bad design.