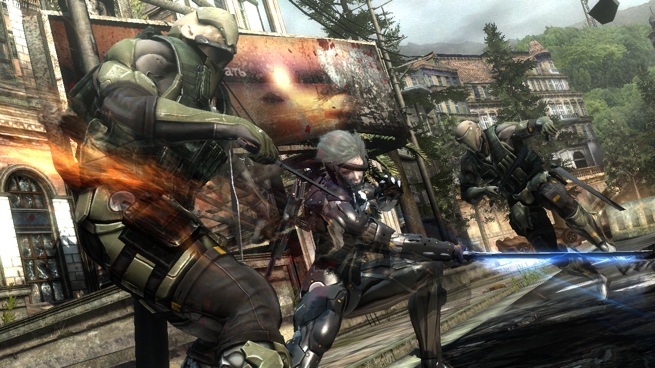 During the first few hours of Konami’s adrenaline-soaked adventure Metal Gear Rising: Revengeance, you’ll use missiles as platforms to jump toward a helicopter so you can slice it in half with your overpowered sword. You’ll body slam a multistory-tall metal gear, one of the franchise’s eponymous giant walking tanks, like a hulking pro wrestler. And you’ll duel against a flamboyant Spanish cyborg atop a train speeding through a pitch-black tunnel.

Revengeance, releasing today on PlayStation 3 (reviewed here) and Xbox 360, is a video game in all the hyperbolic, make-believe, stupid-fun sense of the term. And in an era of brown-and-boring shooters clogging charts and disc drives, that’s a good thing. After all, what would you expect from a partnership between the equally eccentric Kojima Productions and Platinum Games?

Unfortunately, as much as Revengeance lives by its electrifying virtual sword, it also dies by the dated conventions of that blade.

You are the demigod of destruction
Playing as Metal Gear mainstay Raiden — the doe-eyed rookie operative turned ruthless engineered assassin — you can pretty much slice and kill anything in your path. Revengeance gives you an arsenal of upgradeable weapons and moves to ramp up your badass quotient. And the combo-friendly gameplay makes things easy enough to dive into. If you’ve played God of War or the newer Ninja Gaiden offerings, you’ll pick it up quickly. 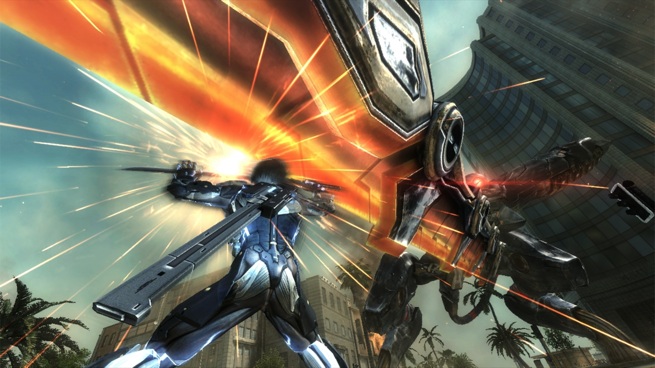 But Blade Mode is what really makes everything exciting. With the pull of a trigger and some careful analog-stick flicking, you can pretty much cut anything in any direction you want. This feature is at the center of Revengeance. You’ll need to master it if you plan on having any success staying alive or defeating many of the game’s bosses.

MGR introduces the concept of “zan-datsu,” which is Japanese for “cut and take.” As you encounter the title’s numerous synthetic enemies, you can chop at specially marked hotspots, exposing the glowing battery packs within their heavily modified bodies. These batteries contain essential elements that keep Raiden’s cybernetic enhancements functional (read: they replenish your Blade Mode and health meters). Zan-datsu attacks even trigger short cut-scenes where Raiden rips the shiny, slimy prizes out, showing off his samurai swagger.

Revengeance passes the Metal Gear test with convoluted colors
Message boards and comment threads went ablaze shortly after Konami announced MGR as franchise purists mobilized against a non-stealth entry in the franchise. Thankfully, Revengeance has the feel of a Metal Gear title, even though it focuses on slashing rather than stealth. The alert-ring sound is present. Codec conversations, too. You can even hide in a cardboard box, just like Solid Snake. 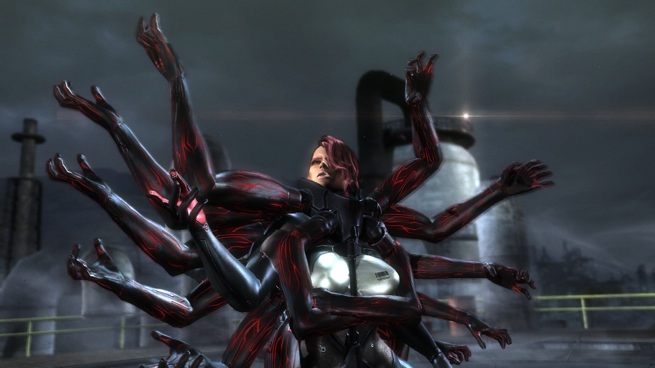 More important, the complex, conspiracy-laden storytelling approach that serves as series visionary Hideo Kojima’s trademark is here as well — granted, with a slightly more streamlined feel. Character designs fall in line with previous releases. MGR’s Winds of Destruction and Desperados feature gimmicky, yet charming, antagonists that can compete with previous bad-guy battalions like Foxhound and the Beauty and the Beast Corps. And your mission handlers all follow Metal Gear tropes, including the young, attractive female who can manually save your progress.

The camera is your toughest enemy
Raiden can defeat anything … well, almost. Revengeance’s camera stands as its most frustrating and unbeatable obstacle. You would think that action superstars like Platinum Games could have perfected such a feature, and if you did, you’d be wrong. The title’s camera is archaic and in constant need of your attention. I had to frequently adjust it with the right stick as I carved up countless mechanical hordes. Sometimes things got so chaotic that I had to direct my julienning efforts offscreen, hoping to blindly strike the hostile forces because I wasn’t able to play cinematographer. This phenomenon repeated itself constantly in the boss fights, where I’d see myself instead of my target.

Blade Mode is a tricky foe, too
Like I said earlier, you won’t get the most out of Revengeance without a solid grasp of its precise sword-swinging element. While Blade Mode is innovative, it is often infuriating. And it sometimes feels just plain unintuitive.

The difficulty lies in the mode’s multiple-step approach. One, you pull the trigger. Two, you line up the cut. Three, you angle the slash. Sounds simple in theory, but when you have to deal with all the x- and y-axis shenanigans in a short window of time, it’s easy to panic and miss the bullseye. I lost out on many sweet, sweet zan-datsus because of Blade Mode’s finicky nature. Plus, it broke my ripping rhythm, which is never good. 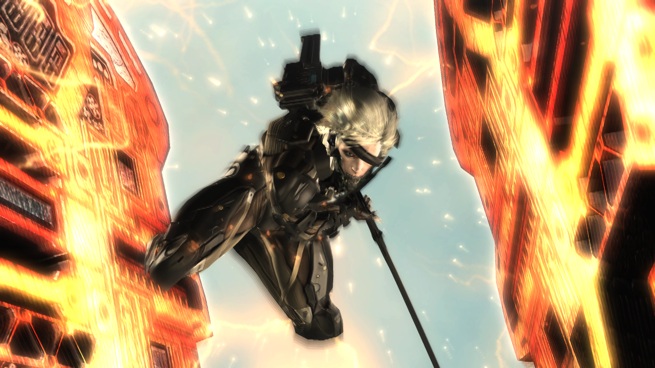 Thankfully, with enough practice, I got more comfortable. But I can see plenty of players throwing their controllers in pure frustration … or slashing at them with real-life blades themselves — which I strongly advise against.

A Platinum-developed Metal Gear release can lead to some side effects
OK, I like that Revengeance relishes its game-ness and that Platinum doesn’t mind breaking the fourth wall. And I appreciate the mostly endearing wackiness that the developers brought to the project. But, on occasion, it can feel like too much.

I could have gone without the cheesy vocals accompanying some of the screeching hard-rock numbers on the soundtrack. And why did the game employ God of War-style invisible barriers, boxing me into specific rooms with no way out until I took down every enemy in sight? And … quick-time events. Blade mode is different and interesting. Quick-time events are dated and irritating.

While we’re at it, how did Raiden have codec conversations with boss characters after cubing them into a bloody, yet orderly, mise en place? Was I talking to their souls as they drifted into the ether?

But hey, this is a Metal Gear game. Anything is possible.

Metal Gear Rising: Revengeance is a successful action title, and it’s a successful Metal Gear title. Think about that for a second. Such a proposal could have resulted in colossal failure and utter humiliation for Konami. Instead, Platinum Games delivered a frenetically fun, albeit flawed, experience set in a beloved universe — a sexy, slash-soaked side story worth playing for franchise fans and newcomers alike.

Metal Gear Rising: Revengeance released on Feb. 19, 2013 for the PlayStation 3 and Xbox 360. The publisher provided GamesBeat with a PS3 copy of the game for the purpose of this review.