Solid Snake seems to have all kinds of phantom pains.

When we meet Snake in the opening of the highly anticipated Metal Gear Solid V: The Phantom Pain, he is down but not out, now missing an arm to match his missing eye. He’s also a bit out of it following a coma, but he has a new robotic arm and some nifty goggles to get him back on a track.

No place to hide

The horse seems to go directly against the series’ history of sneaky stealth play, but it’s a necessity as it lets Snake close expanses of Afghan desert in this vast, mission-based sandbox. It’s not quite an open-world game — it still has the trademark convoluted Kojima story — but it has definitely taken some cues from the popular gaming genre. You can call your horse from anywhere (like in The Witcher 3). But watch out: He can take a few hits, but he’s not invincible, and he knows nothing about stealth.

The world appears to be endless from what I saw, and players are free to roam as they wish. It’s fun to wander around and kind of get lost, with no boundaries to worry about. But you can do only so much in the desert. 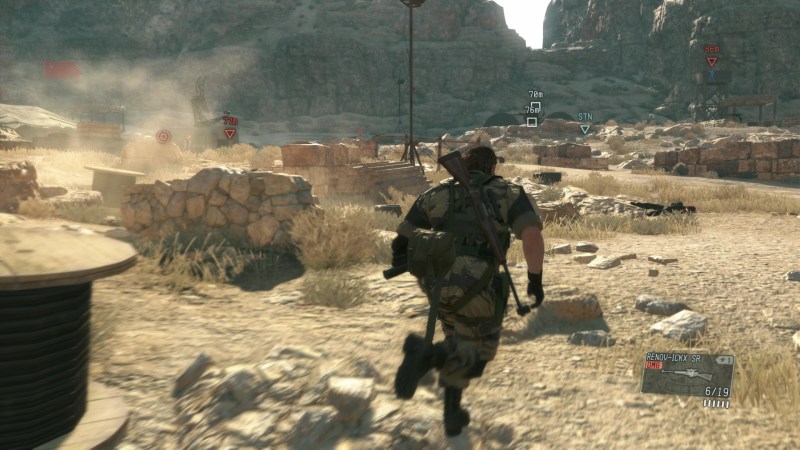 Above: The desert has cover — but not much.

As a series fan used to the dark and sneaky gameplay, I found it intimidating to take to the open desert in the harsh midday sun with little to no cover. This change forces you to rethink how you’d approach stealth, adding new twists (a welcome change to the series’ stealth). A day-to-night cycle also helps keep the sneak play interesting — you’ll want to stay in the shadows during the day and keep out of the spotlights at night. The combination of these changes makes for a tense and sometimes nerve-wracking atmosphere.

Sneaking through the wide open with only some brush and ruins of buildings as cover would feel aimless without Snake’s computerized goggles. In its binocular mode, the specs let him look far off into the distance to spot targets and collect data, and a marking feature lets him set waypoints to travel to prevent getting lost. A neat automatic tracking feature will highlight an enemy’s position after it has been spotted and registered in binocular view, making movement easy to track in normal view, augmented reality-style.

Players are free to tackle mission objectives in any way they wish and at any time they please. But being only lightly armed, and stuck out in the open desert, careful approaches and stealth kills are encouraged. But if you’re a good shot, feel free to plow through enemy camps on horseback, taking headshots. Just know that the enemies seem to continually pour out of nowhere even early on.

I fell a couple of times in two different infiltration and rescue missions, both times overwhelmed by enemies that I failed to spot and mark. All of my kills were of the stealth variety, save for a couple of panicked defensive shots. I fired so many times near the end that I destroyed my silencer, and this led to an entire base’s worth of soldiers storming my position. It’s classic Metal Gear in a wide open setting, and it really works. 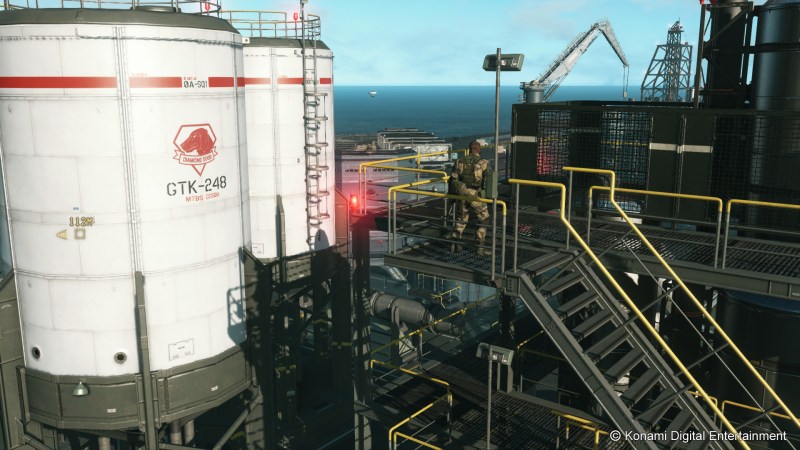 Above: The bases are located offshore, on a rig.

Mother Base and multiplayer

A subgame experience called Mother Base was teased in this demo, but I didn’t have a chance to put it through its paces. The resources that Snake finds out on missions in the main game get sent back to build this base, improving on his abilities and power. Anything from weapons to soldiers to equipment can be taken back to develop or refine to make new goods to take back out in the field.

Fuel, weapons, and other items go toward missions and side-ops later. Eventually, you’ll be able to train staff to go on missions on their own, and they’ll bring back even more resources. With some of the better perks unlocked from base building, players will be able to have vehicles otherwise unavailable delivered to missions. Who needs a horse when you have access to a jeep?

Bases have a multiplayer aspect as well. Online players will be able to invade other bases to steal staff and resources. But leaving your own to invade leaves it vulnerable, opening the door for other players to come in and do the same.

Konami was only able to talk about Metal Gear Online, the multiplayer aspect of the game, which evolves from previous series games. It will feature 8-on-8 PVP fighting in areas based on areas from the single-player campaign, with a full class system that lets players specialize in special skill sets.

As with any Metal Gear game, The Phantom Pain is going to be huge and multifaceted. My two or so hours with the game barely scratched the content. We’ll have to wait until September to really delve into the last of Hideo Kojima’s works on the series, but it’s sure to be just as complicated and crazy as we’ve hoped.