Hideo Kojima, the director of Kojima Productions, has a treat for PlayStation owners who plan on picking up Metal Gear Solid V: Ground Zeroes.

Kojima is bringing an exclusive Ground Zeroes mission called “Déjà vu” to Sony’s new console (and its old one, too). Kojima Productions aired a trailer for the mission, which celebrates the old-school Metal Gear games by placing players in the shoes of a polygonal-looking, PlayStation-era Solid Snake.

Check out the trailer for Déjà vu right here.

Kojima Productions also put out 12 minutes of gameplay today featuring one of Ground Zeroes’ side missions. The video originally premiered at this year’s Tokyo Game Show, but the narration is now in English. Watch it for insight into new close quarters combat features, the slow-motion reflex mode, and the game’s advanced physics, among other gameplay details.

GamesBeat stopped by Sony’s PS4 launch event in New York earlier this week to chat with Kojima, who’s excited to bring Ground Zeroes to the next generation of consoles. He thinks the social sharing features built into the PS4 and the Xbox One mesh wonderfully with the Ground Zeroes’ open-world. 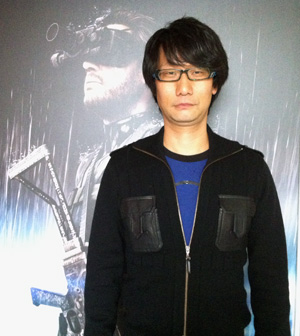 Above: Hideo Kojima in New York.

“The game is not a linear experience,” Kojima told GamesBeat through a translator. “You can make your own very dramatic play styles, make a video, and share it with other people. All these kind of elements are allowed because of all this freedom that players have within the game.”

Ground Zeroes is a prologue to Metal Gear Solid V: The Phantom Pain, but Kojima made sure to clarify that it’s a full, standalone game on its own, not a skimpy introductory experience.

Kojima Productions has yet to pin an official release date on Metal Gear Solid V: Ground Zeroes, but it’s expected to arrive sometime in spring 2014 for the PlayStation 4, PS3, Xbox One, and Xbox 360.