Gaming is sneaking out of Hollywood’s shadow.

Metal Gear Solid V: The Phantom Pain made $179 million globally on its opening day, according to Adobe Digital Index’s new report on gaming trends. Compare that to the blockbuster Avengers: Age of Ultron, which made $84 million globally on its opening day. Yes, The Phantom Pain made almost twice as much. So, the next time someone tells you that triple-A gaming is dying, you’re allowed to laugh in their face.

Metal Gear Solid V: The Phantom Pain came out for PlayStation 4, Xbox One, PlayStation 3, Xbox 360, and PC on September 1. We called it stealth-based perfection (that’s a bit light on story) in our review.

This feat is even more impressive when you consider that Metal Gear Solid V had a cheaper budget. It cost $80 million to make, while Age of Ultron had a massive $250 million budget. And games already make more than film: Gaming will be worth $91.5 billion this year, according to research group Newzoo. Accounting firm PwC says that the movie industry will be worth $88.3 billion in 2015.

“The gaming industry is a lot bigger than most marketers realize,” said Tamara Gaffney, principal analyst and director at Adobe in the report. “These games get more social buzz on opening day than most movies do, and the revenue for one of the top games this year outdid the highest-grossing movie start [Harry Potter and the Deathly Hallows Part 2 with $91 million] by nearly double.” 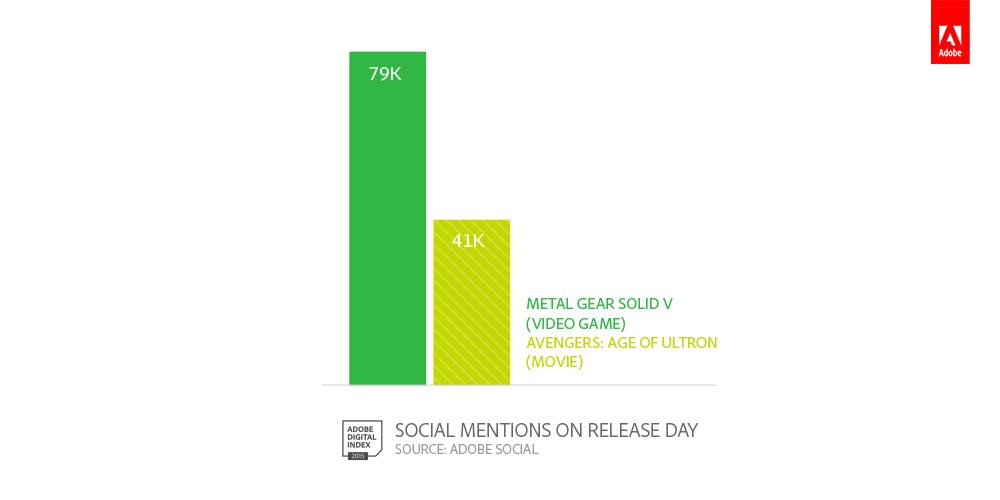 Above: Social media cares more about games than movies.

This makes Konami’s move away from traditional gaming even more frustrating. The publisher/developer is focusing on mobile releases. While that is definitely a growing and rich sector of gaming, Metal Gear Solid V’s success proves that triple-A can still bring in a lot of money.