It’s another sign that Roblox, which went public in March at a $41.9 billion valuation, is attracting organized teams and game studios to a platform that started with user-generated content. Roblox’s valuation is, coincidentally, about the same as the HBO/Warner Media spinoff from AT&T, dubbed Discovery — one of the world’s biggest entertainment companies.

The Gang in Stockholm, Sweden, built the game in the past five months at the behest of Metaverse Team, which former Kabam veterans Ben Topkins (the CEO) and Rob Oshima founded last year. Metaverse Team has just three employees, but it plans to be a kind of matchmaker, putting together brands and game dev teams to make games on top of Roblox, said Topkins in an interview with GamesBeat.

“We see the opportunity to be among the first to bring beloved brands to the Roblox community, in a Roblox style that will resonate with the community,” said Oshima. “Much like the evolution of the App Store, Roblox games page looks like the early days. Now if you look at the top games on the App Store most are big intellectual properties. We want to be the partner that great brands like Hasbro come to when they want to have triple-A, premium experiences on Roblox.”

While it’s a good opportunity, Roblox’s fees are fairly steep, amounting to about 49.9% of total revenues that come in from Robux, the virtual currency for the platform. Plenty of young game studios are graduating from either small user efforts to well-funded startups. Various Roblox-focused studios include Uplift Games, Big Games, RedManta, StyLiS Studios, Rolve, Toya, and Supersocial. 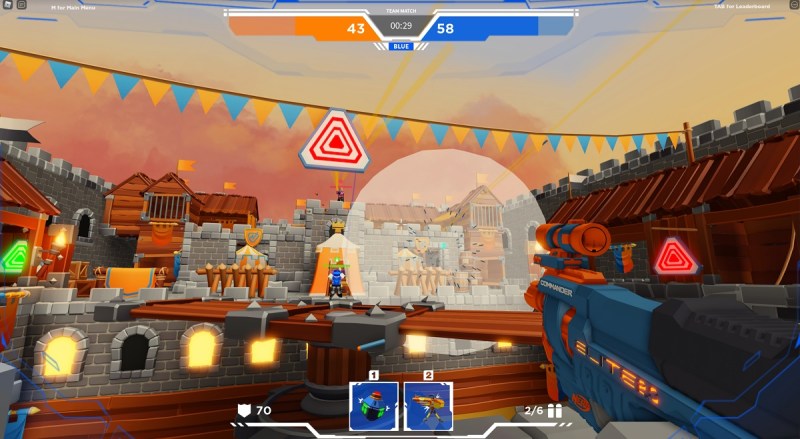 Above: Nerf Strike has a medieval play map.

“We’ve been keeping an eye on Roblox,” Topkins said. “For me, it was seeing the Scooby Doo integration and the Adopt Me! game that just blew up in May of 2020. The concurrence was through the roof. It just occurred to me that there’s this huge opportunity for folks with experience working with brands and triple-A fidelity content to come in and bring high-quality branded content to Roblox.”

In beta testing, the game had an 85% positive test rating, with more than 15,757 favoriting the game. Oshima and Topics said they are excited to be a part of the Roblox development community, building on Roblox-native FPS experiences that have had success on the platform to date. They wanted to build Nerf Strike to be a high-fidelity, high-quality first person blaster game that offers the most polished experience of any other shooter on the platform.

The game features Skill Shots that allow you to alter environments mid-match (move bridges, open/close doors, and reveal jump pads). Blaster choice can be optimized for playstyle, with some better at close-range, while others excel from longer distances, allowing for teams to be strategic about how they start a match — and how they finish it (many of these properties also reflect the IRL experience with these Nerf lines). You can play with eight different Blasters that are based on real-life toys.

The game also has anti-cheat mechanics that allow you focus on your match instead of getting distracted by a cheater. Metaverse Team has been bootstrapped so far, and it’s based in San Francisco.

Topkins said the team is working on more game ideas based on brands that could be turned into Roblox games.

“We have a couple of games in the pipeline and we are looking for more partners,” Topkins said. 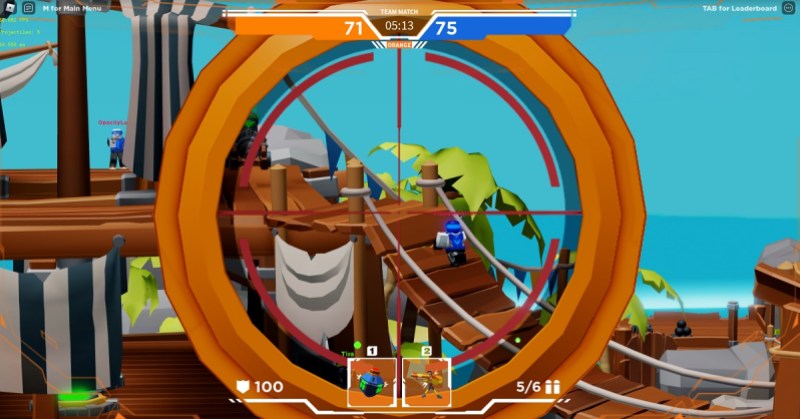 Above: Nerf Strike is a shooter on Roblox.

Oshima and Topkins worked together at Kabam, where they got to launch some of the first 100 games on the App Store and early games on Facebook. At Kabam, they worked on The Hobbit: Kingdoms of Middle-earth, Transformers: Forged to Fight, Fast & Furious: Legacy, Marvel: Contest of Champions, Marvel Strike Force, and Avatar: Pandora Rising. After Kabam was split apart and sold, Oshima went to work at FoxNext Games, which acquired part of Kabam, and Topkins went to work at Elex. While playing games with his nephew, Oshima realized that Roblox could be a chance to be at the platform at its early commercial stage.

They saw a huge opportunity with Metaverse Team similar to early times in mobile and social. They found welcome ears at Hasbro’s Nerf brand.

“Having worked with a bunch of these intellectual property license holders before, we knew how to do these pitches,” Topkins said.

They found a team that was natively focused on making Roblox games in Sweden.

“From playing with Nerf blasters in my friends’ backyards as a kid, I’ve been a blasting fiend, so being part of this team building out a fantastical version of that has been amazing,” said Topkins. “I hope players get the same authentic Nerf vibes that I do from what we’ve built and that it feels like an expansion of the fun they have with their buddies in their own backyards.”

Roblox has to approve each asset created for a game through its moderation system. Once that is done, no further approval is necessary, though the game has to meet Roblox’s community standards.

“We think that Roblox is only going to grow,” Topkins said.