Metro Exodus breaks out of the darkness of the underground existence of the previous two games in the series. But the third game in the Metro series from developer 4A Games and publisher Deep Silver isn’t exactly set in paradise. You merely get to go above ground, take a train into the wilderness, and discover what is left of the world after a nuclear winter.

Metro Exodus is a first-person shooter that takes place in a bleak, snowy landscape in the former Russian Federation, which experienced obliteration in the Metro fiction in 2013 after a nuclear war with the U.S. The game’s 3D graphics are beautiful, but it’s a little sad that it is all in service of recreating such a dreary place where humans are barely surviving against mutated creatures and other malicious people.

I played the game on an Xbox One X, and it had trouble running. But I tried to take into account that the game will feature refinements by the time it comes out in the first quarter of 2019. It ran in native 4K, but it didn’t have HDR turned on. 4A’s game engine is undergoing a major overhaul, with weapons customization, a new crafting system, dynamic lighting, and a day-night cycle.

The title has been in the works since 2013, slightly after Metro: Last Light came out in 2012, said Deep Silver head of brand development Huw Beynon in an interview.

“The goal of 4A Games is to compete with these studios that are making games like God of War but with a unique Eastern vision of the world,” Beynon said. “It’s our most ambitious game yet.”

In fact, the single-player campaign will be more than twice as long as the previous two games combined. It will have open-world elements, as the designers wanted to move away from strictly linear gameplay. It is still very story driven, as there is a point to all of the missions that you undertake in a general area.

“It’s more like a series of mini-self-contained open worlds,” Beynon said. “Each place is handcrafted, and it has its own narrative. The goal is to give player freedom and agency without losing the narrative.” 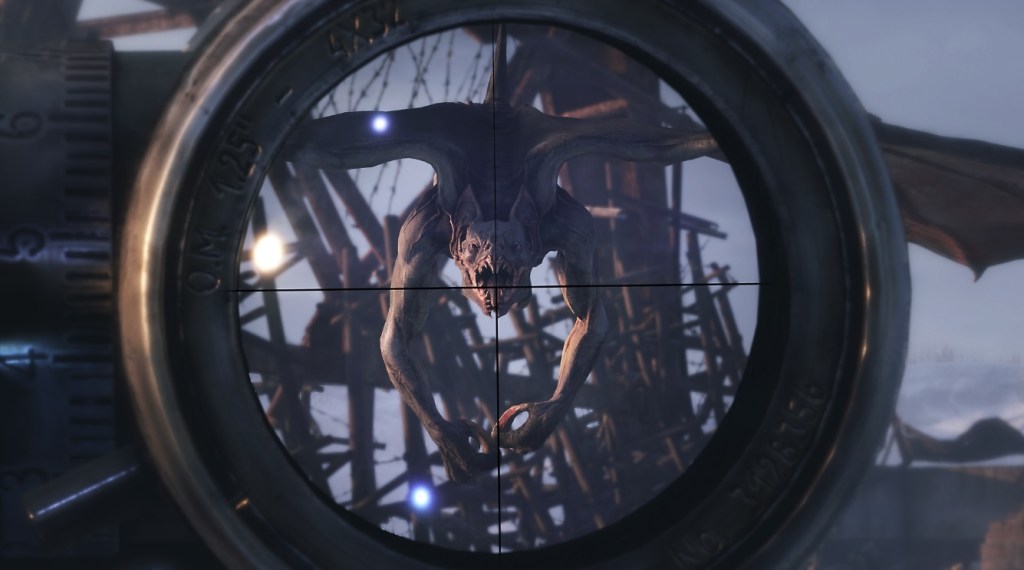 You play as Artyom, the 23-year-old hero of the previous games. He flees the Metro in Moscow aboard the train known as the Aurora. The locomotive heads east in search of life and the alleged American invaders. The story is set in 2036, two years after the events of Metro: Last Light. Artyom rides with the Spartan Rangers and his wife, Anna.

In this demo, the survivors aboard the train are heading into a snowy landscape. The Aurora crashes into a roadblock set across the tracks. The survivors are stranded in an industrial area near a bridge over a major river. The train is damaged and needs repairs, so Artyom, Anna, and others go out on patrol to explore the surrounding area.

The mission in the church 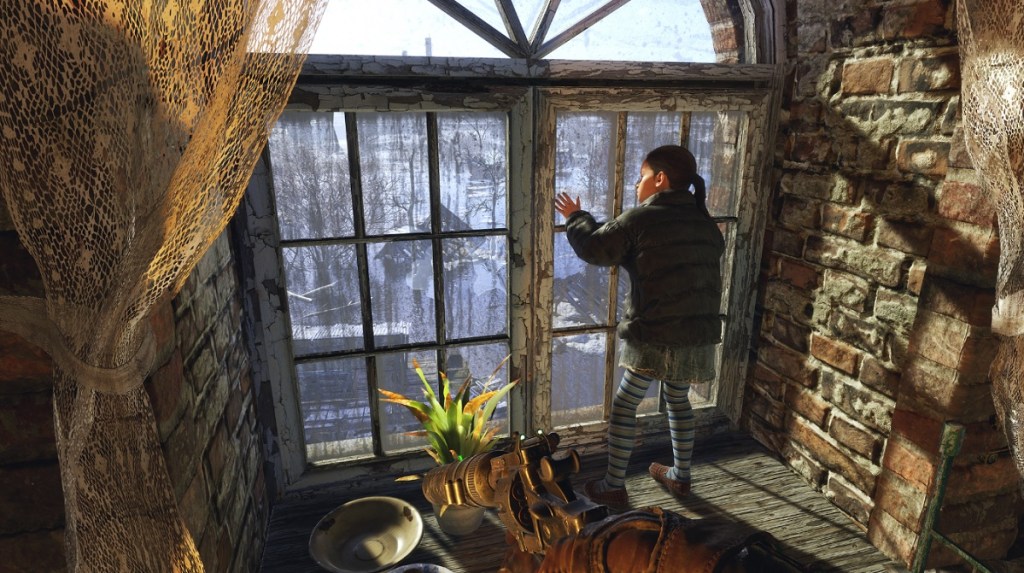 Above: Nastya is a child in Metro Exodus.

Artyom gets a backpack from one of the survivors, and he carries a rifle with a little ammo. As you leave the train, you come to a swampy area that underwater mutants and other creatures defend. Artyom gets in a boat, and he sees someone in the distance atop the ruins of a cathedral.

He sets out for the church, and he has to be on the lookout for items in the landscape. Artyom is a scavenger, hunting for ammo, chemicals, and other resources. He can now craft things like filters, ammo, and other materials. But he also has to be on guard, as beasts come out of nowhere to attack periodically.

I separated from Anna quickly and got into a rowboat. I started rowing, but I was quite nervous, as I saw a bunch of reptilian beasts jump from the shore and into the water. They made wakes as they swam directly underneath my boat. I didn’t know whether they would attack or not.

Finally, after a lot of slow rowing — nowhere near the speed of rowing in God of War — I reached the church. Some dwellers greeted me in a peaceful way and invited me to row into the berth under the church. I did so and heard a preacher giving a sermon to his cult-like followers. Once I was inside the church, a couple of portcullis gates came slamming down on either side. I came into a trap.

But I heard a girl yelling to come up the stairs. I did so, climbing several flights, and I met a young girl and her mother. They were the ones who were waving at me from a distance. They told me they were prisoners, and I had to get out down the back way of the cathedral tower. I did so but I ran into a bunch of armed guards.

I had to use stealth to take them out quietly, but I didn’t really have the training to figure out how to do that without alerting other guards. The watch on your wrist has a stealth indicator. If it is blue, enemies cannot see you. If it goes red, they have spotted you. So, I had to die and try again a few times. It was here where I received the reminder that you have to pump the machine gun to get it to fire efficiently.

Eventually, I made it down, took out a bunch of guards, and survived a shootout on the bottom level. I hopped aboard my row boat again and got the hell out of there. But this time, the water beasts came after me. One huge beast tipped my boat over, and I sank into the green muck. I had to fight off the beast and then get back into the boat. I did so, got to shore, and other mutants immediately attacked me. Eventually, I made it back to the train. That was a small part of the mission, but I was done for the day. 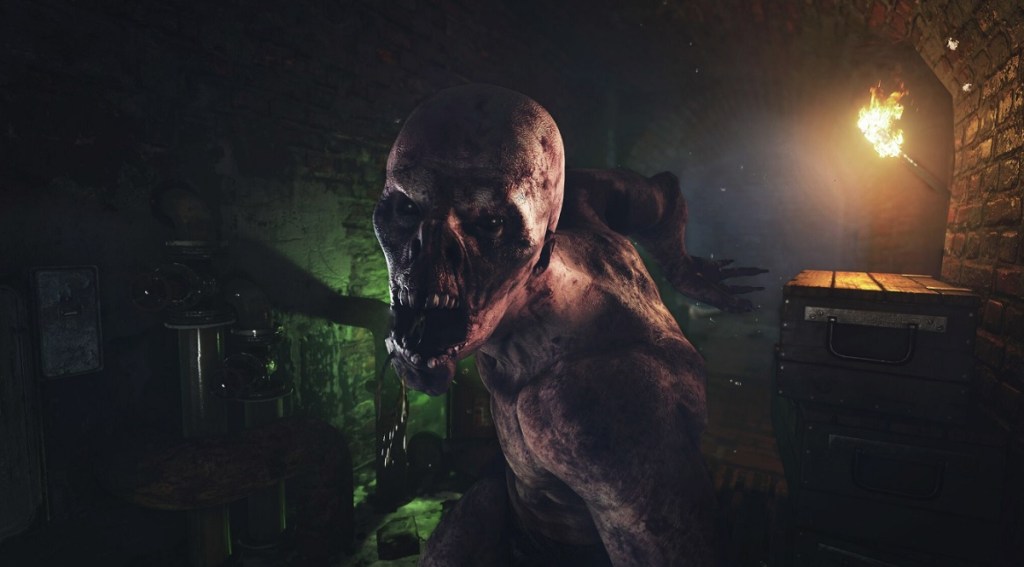 Above: A humanimal in Metro Exodus.

Back at the train, we got word to head out on another mission in a new direction. We came upon some locals who had some good intel about a mechanic who could help with the train. He was holed up in the cabin of a giant crane above a big industrial building. All I had to do was get him down and bring him back to the train.

The problem became evident when I got near the building. Inside, there were a bunch of “humanimals” — or creatures that were once human and were now more like fast-running zombies. They came toward any sound, so stealth was important. I tried going in the front door first, and that was a mistake, as the humanimals just converged on me.

So, I finally went around the back and I saw a ladder. I climbed up and got to the second level and then went up one more level. As I walked across a gangway, it made a noise. I didn’t think about it, but the humanimals came charging. They were smart enough to maneuver up the ladders and trap me on the roof.

I eventually figured out how to take out some humanimals silently on the second level with my knife and then scramble up a different way so that I could avoid making noise. Then, I positioned myself closer to the crane for an escape path. I attracted the humanimals and fired away at them. I finally took them all out, and then, another big monster blocked my way up the crane. I had to take it out with the help of the mechanic up at the top. I finally succeeded and climbed up the crane to meet him. He was friendly and willing to help fix the train.

At the close of the level, atop the crane, I found a work bench where I could craft a number of items. You can craft all sorts of things and customize your rifle’s scope, stock, and gunsight. You can use chemicals to clean it. You can also repair your gas mask. After getting to the top, my demo was done. 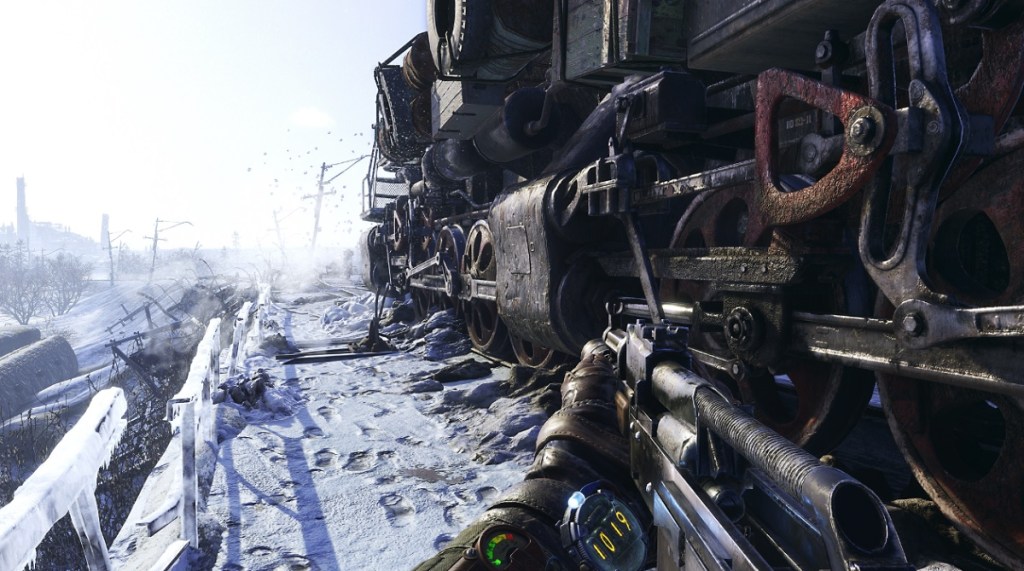 Above: The Aurora train is your ticket to the East in Metro Exodus.

While the missions were interesting and the combat was challenging, this demo wasn’t ready for primetime. It ran too slowly, seemingly below 30 frames per second, and that made doing just about anything difficult. It was hard to fight off the monsters and time the melee blows. It reminded me of some of the initial demos of Far Cry 5 and Assassin’s Creed Origins when I first saw those games. They were pretty but at a cost in speed. Hopefully, 4A Games will solve this problem.

Overall, I like the direction this is going. It’s much more pleasant to play a game in the light of the snowy landscape, rather than to always fall under gray skies or darkness like in the earlier Metro games. It has an interesting story, and I like how it balances the threats of human enemies and monsters.

It’s a difficult game, and I like that. But it’s forgiving in that it loads you at a checkpoint just before your latest mishap. I’d be willing to play it so long as the speed improves and the loading times lessen.