I didn’t let myself get too excited about Metroid: Samus Returns. I love the series. It’s been a long time since we’ve had a good Metroid game. So the idea of a new (or remake, whatever) entry in the franchise for the 3DS bringing it back to its 2D roots should have made me super excited.

But I had reasons to be skeptical. First of all, Nintendo seemed to bury its announcement. It revealed Metroid Prime 4 for the Switch during its big E3 presentation, but Samus Returns’s reveal happened during a later stream.

Then there’s that whole long wait thing. The last Metroid game, Federation Force, was an unwanted 3D co-op game for the 3DS last year. It didn’t even star Samus, the space-faring bounty hunter badass who serves as Metroid’s star. No one asked for Federation Force, and fewer played it. Before that, Other M for the Wii in 2010 was the last real Metroid game. I actually defended its weird blend of 2D/3D action, but it’s definitely a flawed game that few remember fondly. The last full-on 2D Metroid game? That was all the way back in 2004 with Zero Mission for the Game Boy Advance.

Zero Mission was a remake of the original Metroid. Likewise, Samus Returns gives a similar treatment to Metroid II: The Return of Samus, which came out for the Game Boy in 1991. But I discovered that Samus Returns, which comes out on September 15, is much more than a remake. Despite my reservations, this is the Metroid game I’ve been waiting for. 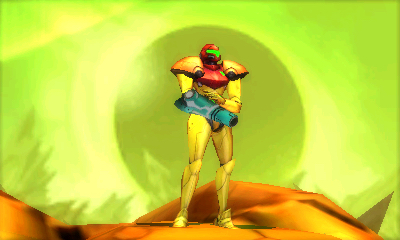 Above: It’s good to be back.

It’s crazy that we’ve had to wait this long for a new 2D Metroid game, because 2D Metroid games are some of the best things you’ll ever play. Super Metroid has to be one of the most common names you’ll see in most “best game ever” lists. The mix of 2D platforming, shooting, and exploration gave birth to a genre of non-linear sidescrollers that tries to capture Metroid’s magic.

While Samus Returns replaces pixels with 3D models, its action still takes place on a 2D plane. It’s immediately familiar to anyone who’s played these games before. That precise way Samus moves — her responsive running and floaty jumps — it all feels right. You’ll use a lot of the familiar Metroid powerups, including classics like the Screw Attack and Grapple Beam. And with each new powerup comes the opportunity to re-explore old areas and find new paths or secrets.

But Metroid Returns isn’t just a retread. It brings new ideas that help the game feel like more than a nostalgia trip. While other 2D Metroids limited your aim to eight directions, you can hold down the L button and use the 3DS analog nub to aim in full 360 degrees. It’s nice to be able to plant your feet and aim without having to strafe in order to line up perfect shots.

You can also counter most enemies by hitting the Y button at just the right moment before they attack you. Doing this leaves them open to a ton of damage that’ll usually kill them. It helps mix up combat and makes it about more than just shooting things. 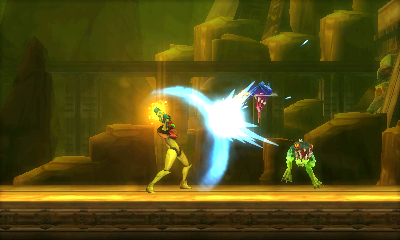 Above: The counter in action.

Samus also has access to Aether abilities that all share the same energy resource. Some of these are quality-of-life abilities, like a pulse that scans the nearby area. In past Metroid games, you have to find a map station if you want to see areas beyond the ones you’ve discovered. In Samus Returns, this pulse is how you fill up your map. It also reveals tiles that hold secrets, like areas you can clear with bombs or missiles. That means you no longer have to test out every single corner of every room to look for secrets.

Other Aether abilities can offer small advantages during fights or help clear complicated puzzles. One, for example, absorbs damage until you run out of energy. While this can extend your life during a fight, you’ll need it to clear areas filled with poisonous gas that would otherwise quickly kill you.

It’s also worth mentioning how nice it is to have the map open at all times. Thanks to the 3DS’s dual screens, you don’t need to access a separate menu to keep track of where you are. You can also use the touch screen on the map to place markers if you need to give yourself a visual reminder to check an area again later when you have more abilities. It’s nuts that this feels like a novelty, since Nintendo has had so many dual-screen systems since the DS launched in 2004, but this is the first time one of them has had a 2D Metroid game. 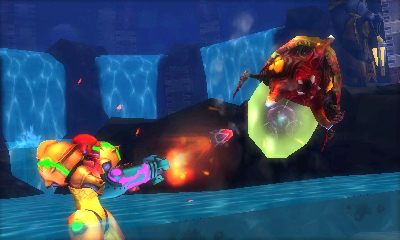 Above: Gotta get those Metroids.

More than a remake

Nintendo has gone out of its way to call Samus Returns a reimagining instead of a remake of Metroid II. And they’re right. While Samus Returns has the same concept as Metroid II — you go to a planet and kill all the Metroids — it has new abilities (like the Aether ones I mentioned) and even brings in classic Metroid skills (like the Grapple Beam and Super Missiles) that weren’t in Metroid II. Even the map only bears a passing resemblance to the original.

It’s better to think of Samus Returns as a new game than a remake.

Of course, it also has a big visual makeover. I was nervous when I saw that Nintendo was going to use 3D models instead of sprites, but Samus Returns looks great. The atmosphere is dark, creepy, and alien. And although you play on a 2D plane, the backgrounds have a lot of depth and details (I actually recommend you play the game with the system’s 3D on so you can enjoy them). 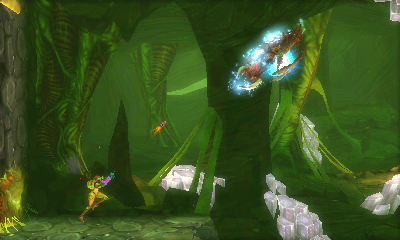 Above: Oh look, another cave.

Samus Returns is a big game with plenty to explore, but a lot of the world looks the same. It’s pretty much all a cave. It’s a pretty cave. It’s definitely a Metroid cave. Sometimes the cave is more blue than green. But even though the map is divided into several areas, they all look and feel pretty much the same.

That repetitiveness can extend to the gameplay. You fight a lot of the same enemies (or slightly upgraded versions of them). Many puzzles will have similar solutions. Even the Metroid fights, which are challenging and fun, happen enough times with little variation that they begin to feel routine. 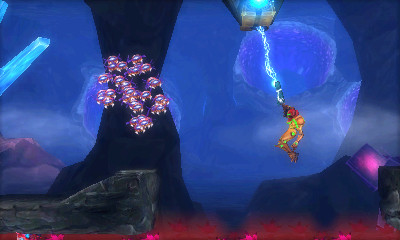 Samus Returns has an appropriate name. It really does feel like a homecoming for a franchise that I love. It’s great to be playing a new 2D Metroid.

But it doesn’t just work off of nostalgia. Samus Returns’s new ideas actually add improvements to the classic Metroid gameplay. It might have come a little later than I liked, but Nintendo proved that they can still make this franchise exciting again.

Metroid: Samus Returns comes out for the Nintendo 3DS on September 15. The publisher provided us with a code for this review.