Players have previously only been able to buy digital goods for Minecraft that were developed in-house and sold via an online store. Some third-parties have sold add-ons via their own portals, but with restrictions. The new official Minecraft Marketplace, however, will be attached to a user’s Xbox Live account and uses a new digital currency called Minecraft Coins to pay for goods, which can be procured using real money. It’s not entirely clear whether coins can be earned through unlocking certain in-game achievements — Microsoft makes no mention of this.

The Minecraft Marketplace will be available via a Discovery update coming soon and will arrive on Minecraft: Windows 10 Edition and Minecraft: Pocket Edition. Players can buy maps and skin and texture packs from creators who have been hand-picked by Microsoft. All purchases will be available to use across platforms. 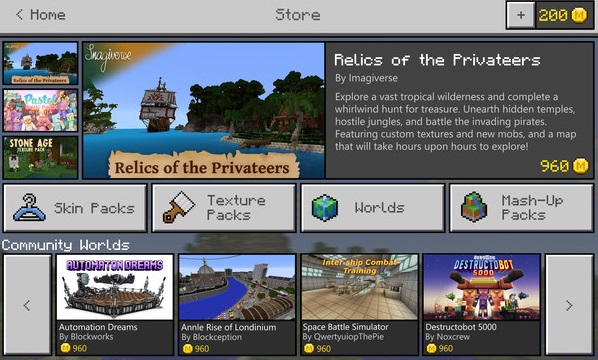 There will be nine creators at launch though Microsoft said that it will be adding more every month. Among the initial roster of creators is Blockception, which is selling a replica map of London that evolves through the ages as players progress, and Sphax has created a pack that transforms Minecraft into a comic book.

Mojang, the Sweden-based game development studio that shot to prominence due to its work on Minecraft, was acquired by Microsoft for $2.5 billion in 2014. Microsoft has been pushing to monetize the game through a number of conduits, including a new education edition, which it sells to schools.

Formalizing in-game purchases through an official marketplace for third-parties is an obvious route to go as it opens Microsoft, with 55 million active players each month, up to a potentially lucrative avenue for revenue. Microsoft is a little vague on the exact cut it gets; however, it does say that the various app store platforms (e.g. Apple’s App Store and Google Play) take a 30 percent cut on each purchase, with creators getting “the majority after that.” Additionally, by bringing all add-ons in-house, this gives Microsoft more control over content to ensure it “doesn’t contain viruses or malware,” it said in an update.

“Bringing other creators in to sell their goods is good for players as it enables access to a ton of different kinds of content,” said John Thornton, the executive producer of Minecraft Realms. “We know that people want to change the look of Minecraft to be what they want. There are also a number of individuals who look at Minecraft as a platform for entrepreneurialism, looking for a way to make a living doing something they love. For players, this is the best way to get content easily in the game, and for creators this ends up being a source of revenue for them so they can continue to make fantastic creations for all the players.”

Though Microsoft says that it will be accepting applications from other creators to join the marketplace, ultimately it’s not an open platform for anyone to sign up of their own volition.

“We think it’s important from a quality perspective to have a curated marketplace where we are reviewing the items and working with creators to make sure the content is appropriate and exciting for players,” added Thornton.