Microsoft maintains that Windows will remain an open platform.

During a talk at Microsoft’s Build conference today in San Francisco, the company responded to criticism that it was moving to close down the open PC platform. Terry Myerson, executive vice president for Windows and Devices at Microsoft, said during the opening keynote that the platform has been open for 30 years and will continue to be so.

The future of Windows — and Microsoft’s stewardship of it — came under scrutiny a few weeks ago by Tim Sweeney, CEO of Gears of War creator Epic Games and one of the best-known technical experts in the game industry. He stirred up a big debate about the future of Windows in an op-ed piece in the Guardian. Sweeney said that he worries that Microsoft is making it hard for developers to create games and programs that do not use its Windows app store — and that move could close off what to date has been an open platform.

Microsoft CEO Satya Nadella also made a reference to Windows as an open platform for everyone in his part of the keynote.

Sweeney is eagerly awaiting Microsoft’s detailed response. Sweeney expanded his with a technical description of what it will require for Windows to remain an open platform. Microsoft executives had previously said that we had to wait until Build for its response. Regarding the Universal Windows Platform, which makes it easy to create cross-platform apps for Windows 10, Myerson said, “We designed this platform for all of our customers, partners, and developers.”

He added, “This is an open platform. It is an open ecosystem of hardware and software development partners. It has been for over 30 years. Nothing changes with the Universal Windows Platform.” And he said, “There has been no better time to be a Windows developer.” 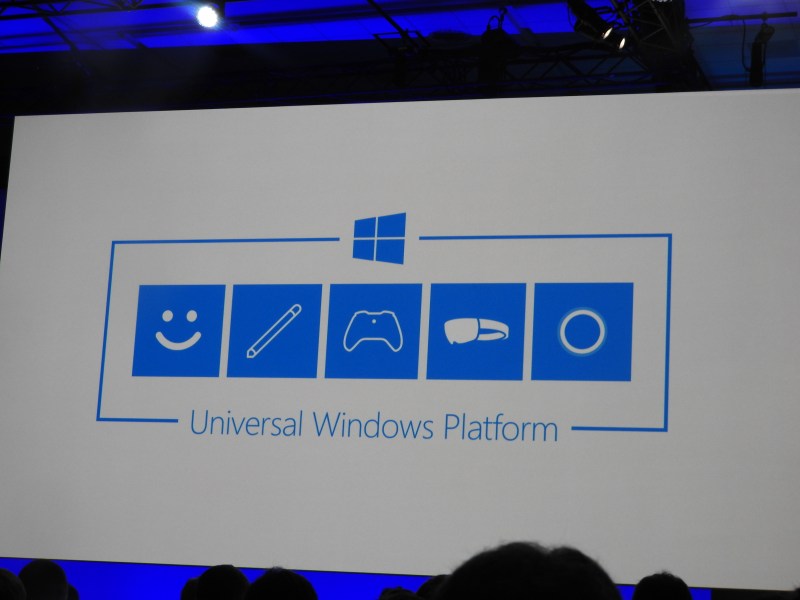 He said that the number of developers has increased 60 percent in the last few months alone. He said it brings seamless and robust installs, uninstalls, and updates to all Windows platforms. So far, that’s all they’ve said, and we’ll update this if they say more on Sweeney’s particular criticisms.

A lot of people, including a number of game developers, care about this. The Windows PC has been a platform for economic success, open applications, and third-party developer freedom for a long time. To close it off could be controversial, and that’s why Sweeney said he was speaking up.

In our earlier interview, Sweeney said that everyone has to be vigilant because Windows 10’s design “encroaches on user freedom more than any past version.” Sweeney believes Microsoft can extend that design to what it does with third-party applications like the kind that Epic, Electronic Arts, Activision Blizzard, Valve, and many other PC game and app developers make.

Patrick Moorhead, analyst at Moor Insights & Strategy, said, “I like what Microsoft is saying about “open”, but wish they would have addressed this at Game Developers Conference with all of the developers.”

In his Guardian piece and in our interview, Sweeney insisted that UWP is locked down, that it’s impossible to download UWP apps from websites of publishers and developers, to install them, update them and do commerce outside of the Windows store. The option for enabling an alternative is buried in the user interface, and this “side loading” is very difficult. In the past, the Win32 interface had no such restrictions.

Kevin Gallo of Microsoft said in the keynote today that the Desktop App Converter takes Win32 apps and games and converts them to Windows 10 apps for the Windows app store. There is still a submission process, which Gallo hasn’t yet detailed. That’s a small piece of detail that developers cheered, but the big technical questions are still open.

“I want to personally thank our developers,” Gallo said. “We cannot build the platform without you.”