Crysis maker Crytek is one of the hardcore video game makers that is experimenting with new platforms and business models. And in the case of Warface, the German video game maker is taking free-to-play gaming to the Xbox 360.

Crytek launched its first-person-shooter modern combat game on the PC last year and it got more than 7 million players in Russia. Then it launched the title on the PC last fall in the U.S. Now it will join Wargaming’s World of Tanks as the next major free-to-play game on the Xbox 360. We caught up with producer Wim Covaliers of Crytek Ukraine at a recent demo of the game. Here’s a transcript of our interview.

The game will debut in the second quarter for Xbox Live Gold members on the Xbox 360.

GamesBeat: How long has the PC version been out? Is there a difference between that and the 360 version? 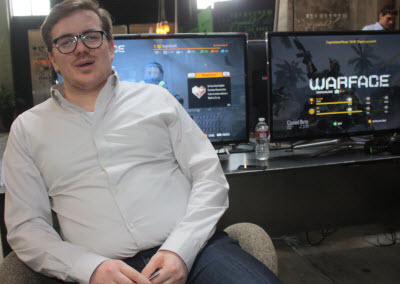 Above: Wim Covaliers of Crytek Ukraine

Covaliers: The PC version’s been out for a while. I think the first version was in Russia, which was about two years ago. It’s been coming out in different places across the world ever since.

As far as differences, we try to keep that to a minimum. We made some changes. Obviously we need to make sure that it works well with a controller. We needed to update the menus to take into account that you’re not using a mouse and keyboard. Other than that, though, as far as content, it’s more or less the same.

GamesBeat: Are you able to play across both platforms?

Covaliers: No, there’s no cross-platform play.

GamesBeat: What’s the hard part about that? It doesn’t happen very often.

Covaliers: I don’t know all the technical reasons, but it’s very hard to make it work. Controllers are a very different way to play compared to a mouse and keyboard. It’s hard to get to a place where it feels fair on both sides.

GamesBeat: What made the 360 attractive to you as a platform?

Covaliers: One thing is just the possibilities of Xbox Live, with their matchmaking capabilities. They have a lot of stuff built in, a lot of social features and things like that. Also, especially in the west, people really like playing on console. To be able to bring this game to people who don’t necessarily have a gaming PC at home, but do have a console, is something that we’re excited about. It could open up the game to a lot more people.

GamesBeat: Is the player base attractive as well? In a free-to-play game, the volume of players matters a lot, because it’s just a small percentage of players who buy something. Does the volume on the 360 look attractive that way?

Covaliers: Yeah, exactly. The 360 has a huge installed base across the world. To be able to give this game to that installed base is what makes it really interesting. As you said, for any game, you need a certain volume of people playing, but for Warface it’s doubly important to reach all those people and get them in the game.

GamesBeat: And they’re hardcore players, too. They’re proven spenders when it comes to games. That seems like it’s important.

Covaliers: We’ll find that out as the game goes live. It’s the first free-to-play first-person shooter on Xbox Live. We don’t have that many metrics to predict the spending habits of our users. They’ve never had a game like this before. But we believe we have a game that’s fun to play, that’s fair to play, and that gives people the ability to spend money if they want to. It doesn’t hit them about the head with reminders – “Hey, you need to spend money!”

GamesBeat: Is there anything you still have to tweak in order to get the Xbox 360 version done?

Covaliers: Part of the reason we’re doing a closed beta is just to see how everything works. We’ve had to port all the tech to the 360, and we also want to balance out any remaining problems with things like the weapons. We want to see how the shop works and whether the prices in the shop make sense or whether they need to be changed. We’re still working on some things fairly closely, with the help of the data we get from the beta players.

GamesBeat: Did the U.S. receive the game as well on the PC side as other territories? Has it done well here?

Covaliers: We’re mostly here to discuss the 360 version, but yeah, PC-wise it’s doing well. We can’t complain about how well players are enjoying the game. We’re already showing the advantages of having a game as a service. People are seeing new things constantly come in. We’re constantly making adjustments to the game based on what the community is asking for. We know that we’ll be bringing that to the 360 crowd as well.

It’s very exciting to me as a gamer and a developer, this idea of constantly adding to the game, making it bigger and better, seeing what people are asking for, and developing toward those needs. Outside of the fact that it’s free-to-play and that’s a first for a shooter on the Xbox 360, it’s also one of the first times that there’s been a game service like this on the 360. That’s also very important.

GamesBeat: Do you have to rebuild a lot of the game for this platform?

Covaliers: No, not really. We have a team working on the 360 version to make sure it runs smoothly and hits all the quality standards we’ve set. But as far as the content itself – levels, weapons – there’s no need to make big changes. The DNA of Warface is important to us, wherever you play Warface across the world. We try to keep each version as close to the others as we can.

GamesBeat: The auto-aim seemed to be slightly off for me, which is always important. I’ve never had the best aim.

Covaliers: The mission we were playing makes that a bit hard, because you’re constantly moving. That’s also one of the things we’re looking at right now. In the PC version we don’t need any aim assist. We’re seeing how people use the auto-aim and looking at whether it needs to be tweaked at all. That’s exactly what the closed beta is for, so we can see what we should update and change. 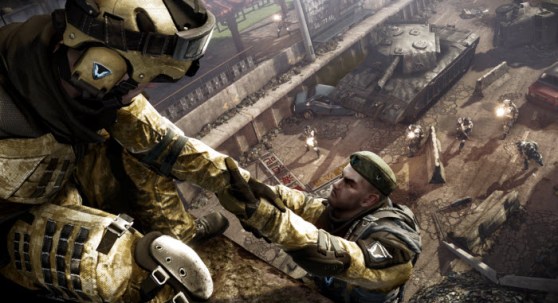 GamesBeat: How large a game is it going to be – as far as the size of the download — when you first deliver it? Do you know how much space each new level will take up?

Covaliers: It’s around three gigabytes, I think? Something like that. Two to three gigabytes. For levels, we have a system that gives you a fresh mission every day. There’s quite a lot of content there. Each mission has two different settings, too, with a range of what we call sub-levels that we use to put together the missions. For the versus, we have three game modes, each with a bunch of maps. So there’s quite a lot of stuff for people to see, especially if they haven’t played Warface before.

GamesBeat: Does everything about the 360 seem pretty seamless, too, when it comes to making transactions happen or things like gifting content to people?

GamesBeat: It seems like cheating would be easy to control, too.

Covaliers: Yeah. Anti-cheat is extremely important to us. We want to make sure that we don’t have any cheating, and if we do have cheaters, that they’re found and taken care of as soon as possible. I don’t believe we’ve had any problems with cheaters in the 360 version, but we have a team ready to deal with that in case it happens. The response will be swift and severe. [laughs]

GamesBeat: Did you watch the World of Tanks debut on the Xbox 360 with any interest?

Covaliers:  It’s a very interesting sign of what’s to come, that they’re also bringing this kind of free-to-play game to the 360. It shows that not just developers, but also big companies like Microsoft, are starting to realize the power of free-to-play. I’m interested to see how it’s going to go – not just for Warface, but for free-to-play games in general.

To us, though, what’s really important about Warface is that it’s fun to play, not just free. It’s a fair game. The whole team mechanic, working together with a team, and the co-op modes and all those things, we believe that it all adds to the value of the experience. Getting all that for free is a pretty sweet deal.