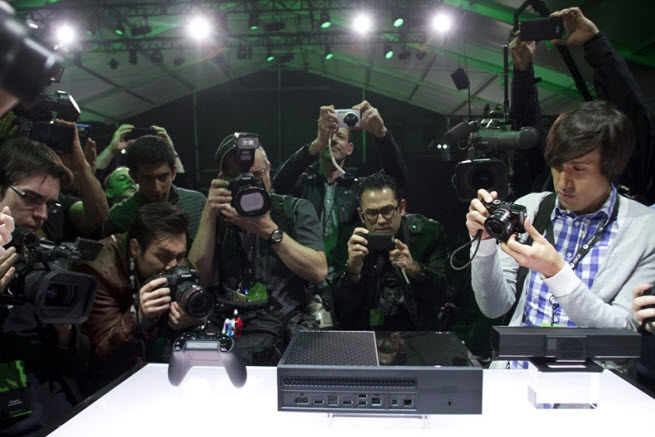 Microsoft’s announcement of its Xbox One video game console landed with a thud on Wall Street, where the company’s shares are falling this morning. Other reactions have focused on what Microsoft didn’t talk about (it’s saving a lot for E3 in June) and consumer rights issues that it didn’t fully address.

Unfortunately, stock traders are reacting to the partial information that Microsoft released yesterday, and they’re not inclined to care if Microsoft was keeping its powder dry until the official E3 press conference June 10.

Microsoft touted features such as the integration of Kinect motion and voice controls into the heart of the system and the addition of new entertainment services and Skype. It showed glimpses of games such as Call of Duty: Ghosts (with exclusive downloadable content), EA Sports titles, and Microsoft’s own Quantum Break, promising they would look awesome. It touted clever hardware innovations such as cloud processing, which uses data centers to complement the processing power inside the machine. It also said it would integrate SmartGlass app controls into the system. Instant Kinect command recognition is Microsoft’s main selling point for how entertainment will become better on Xbox One. But those features didn’t capture a lot of the headlines.

Analyst Michael Pachter of Wedbush Securities said in a research note that he liked what he saw so far but details that will determine long-term success will likely have to wait until the E3 trade show in June. Ben Schachter of Macquarie Research wrote there were great new features in Kinect integration for multimedia, some exclusive content and a confirmed 2013 launch.

“However, we saw nothing earth-shattering, and there was no word on pricing, not that we were expecting pricing just yet, which we think will be absolutely key in determining the pace of adoption beyond the initial launch surge,” Schachter wrote. “If a low initial-cost subscription model is announced at E3, it would be a meaningful positive in our view.  If not, we may need to wait and see if any key must-have platform-exclusive features or titles appear.”

Colin Sebastian, an analyst at Baird Equity Research, said that Xbox One should “be a contender in the living room battle.” He called the “all-in-one” living room box a “significant upgrade.”

“We view the broad capabilities of the Xbox One as likely to appeal to a broad market, although price remains an important unknown,” he wrote.

That battle isn’t just about games but in countering the incursion of iOS and Android platforms into the living room and overall consumer behavior.

“Overall, we believe the Xbox One reveal demonstrates that Microsoft has a capable platform in the living room battle, even if there is a narrow window of opportunity to build share before other platforms gain a foothold,” he said.

Based on reaction in forums, Xbox One hardcore fans appear to be upset about Microsoft’s failure to address three issues that go to the heart of a consumer’s “rights” when it comes to buying and owning their games and consoles. Microsoft said there would be no backward compatibility for Xbox 360 games, not even the digital versions of games downloaded from the Xbox Live Arcade. Microsoft also said there would be limitations on the trading of used games, though it offered a vague promise that it would have a solution for second-hand trading of games. And Microsoft conceded that, while the machine does not require an always-on connection, you will have to log into the internet about once a day to keep the console and games updated.

Kotaku’s Luke Plunkett raised those issues in a story headlined “That Xbox One Reveal Sure Was A Disaster, Huh?” Indie game developers expressed disappointment over the lack of self-publishing of apps on the platform. Rob Fahey wrote for GamesIndustry.biz that “After an awful start, Xbox One must redeem itself at E3.”

Meanwhile, Sterne Agee analyst Arvind Bhatia said that the news was also mixed for GameStop, the world’s largest video game retailer. The fact that Xbox One is launching worldwide in 2013 is a good thing for the retail chain, but he said that Microsoft’s position on used games (including misinformation about that) hurt GameStop shares. Microsoft corporate vice president Phil Harrison told us in an interview that Microsoft would release details later on how consumers can trade in and resell games. Clearly, the nuances of this policy on games — which will have to be installed on a hard drive and tied to a user’s identity — could have an effect on GameStop’s capability to buy and resell games.

“Xbox One appears to be the next logical step in Microsoft’s ambitions to dominate the living room with an all-purpose entertainment device,” Bhatia wrote. “A significant amount of time during the presentation was dedicated to showing nongaming functionalities such as the capability to switch to live TV, browsing, Skyping, etc. The mainstream media has generally praised this console, though the reaction from the gaming-focused media has been somewhat mixed.”

Microsoft said it has 15 games in the works at its own studios for release in the next year. Those include eight brand-new properties, and it is working on a Halo TV show with Steven Spielberg.

Microsoft left out some important pieces of the puzzle, probably to keep Sony guessing. The price, launch date, and supply levels will be important factors in how competitive the machine will be compared to Sony’s PlayStation 4, which is launching this fall.

“The user interface looked simple and seemed to be very responsive with no visual lag,” said Billy Pidgeon, a longtime game analyst. “It’s a powerful console loaded with many features, and it looks like Microsoft didn’t cut any corners. We’ll learn more about the most important aspect of Xbox One, the games, at E3. There could be a downside to the high-powered hardware — the price could also be very high.”

Schachter wrote in his conclusion, “Price, price, price will be key.”