Microsoft has the Titanfall jitters tonight. The new Xbox One exclusive from publisher Electronic Arts and developer Respawn Entertainment has launched at midnight store openings on the East Coast. Soon, the world will get access to the game that could make or break the Xbox One in its battle with Sony’s PlayStation 4.

Microsoft has a lot at stake, and it hopes Titanfall will turn the tide of console sales. Sony has sold 6 million PlayStation 4 video game consoles, which are priced $100 cheaper than Microsoft’s $500 system. Microsoft has sold around 4 million units or so based on the latest estimates. Titanfall is the biggest exclusive to come to the Xbox One, and its launch has been timed with the debut of live gamestreaming via the Twitch service on the console. 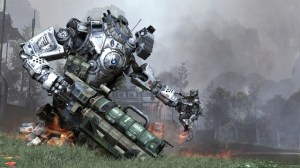 “We’re nervously excited,” said Yusuf Mehdi, the chief marketing and strategy officer for Microsoft’s game business, in an interview with journalist Geoff Keighley on Twitch. “It’s the most anticipated game for us. We are nervous as we are about to launch it to millions of fans around the world. I’m excited to see what the fans think.”

Mehdi downplayed Sony’s current advantage over Microsoft in the first five months of sales. In January, Sony outsold Microsoft by a 2-to-1 margin in the U.S.

“It’s early in the cycle,” Mehdi said. “People say this generation will sell 350 million consoles when it is all said and done. We are only 10 million in.”

Twitch broadcast the live launch event at the SXSW show in Austin as well as midnight game store openings on the East Coast. Gamers lined up for hours for their chance to lay down at least $60 for the multiplayer-only sci-fi shooter game and $500 for a Titanfall Xbox One bundle. If Microsoft sells a lot of these bundles, then it could very well gain ground on Sony — until the next big game comes along. 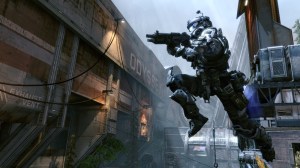 Above: After a match ends, the losing team has a few seconds for “extraction” — any players who can escape to the dropship without getting killed by the other team will get some bonus experience points.

Vince Zampella, the head of Respawn Entertainment, also spoke at the live event. He said the team put a lot of work into the development over the past couple of years at the same time when the company was creating a whole new studio. Respawn’s founders and many employees came from Infinity Ward after an acrimonious split with Activison that led to a big lawsuit. That suit was settled, and Zampella and company were able to make their game. EA picked up publishing rights and chose to make Titanfall into an Xbox One exclusive. Breaking away from Call of Duty, the team had complete freedom to create a new shooter.

“In a lot of ways, it’s invigorating, and a lot of it is scary,” Zampella said. “There is no right or wrong. The team puts out their ideas, and people want to fight for their ideas. That coalesces. It’s exciting. The reception has been amazing from all of the press and the fans.”

Mehdi acknowledged that the Respawn team pushed Microsoft to make its cloud-based game service better and to make improvements to things such as the controllers. He noted that 500 million voice commands have been issued via the Kinect motion sensor as gamers use voice controls for both their games and movie and television playback.

Respawn is looking pretty now as Titanfall could sell 4 million copies in its first month if there are no technical glitches in online play, according to Piper Jaffray analyst Michael Olson. It could sell an additional 4 million after that. But Respawn also has to add a lot of game modes and other features if it wants Titanfall to last as long as a Call of Duty game does.

For EA, such sales could make a big difference in quarterly results. EA’s fiscal year ends March 31, so it will be able to include 20 days of Titanfall sales in its year-end report.

Certainly, Titanfall won’t suffer from lack of attention. The reviews are coming in positive (our GamesBeat editor-in-chief Dan “Shoe” Hsu rated it 82 out of 100), and the average score on review aggregator Metacritic is 87 out of 100. That’s based on 29 reviews so far. The game is also receiving coverage in The New York Times, Bloomberg Businessweek, USA Today, and the Wall Street Journal.