After a lot of anticipation and some major investments in Hollywood, Microsoft is unveiling its original television shows, dubbed Xbox Originals, for its Xbox Live online entertainment network. And yes, there’s going to be a Halo TV show as well as a Halo “digital feature.” 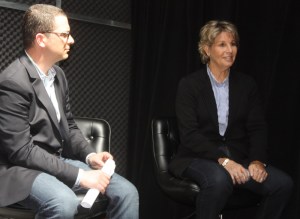 Above: Jordan Levin and Nancy Tellem

Much like original TV shows from Netflix and Amazon, Microsoft is expanding beyond its core business into television entertainment in an effort to offer exclusive content for its 48 million Xbox Live members in 41 countries. Xbox Originals could make Microsoft into a Hollywood player or send it down in flames.

Seasoned TV executives Nancy Tellem, the former president of CBS Television Studios, and Jordan Levin, the founder of the WB Network, are overseeing the shows. Over the past 18 months, they have commissioned shows that are expected to appeal to the mostly male, young, hardcore gamers who are the biggest users of Xbox Live. But they will also have elements that could make them much more broadly appealing to larger TV audiences.

“Everyone has a different agenda as far as what they’re trying to accomplish with original series,” Tellem said in a press briefing. “For Netflix, I think original series was a differentiator, and in the future, it may protect against other content providers who’ll be more resistant. Amazon has another model. For us, our focus is on using our console and people who are subscribing to our service. Between these game announcements and releases, we offer content that will keep them engaged and on our service.”

All told, Tellem and Levin are revealing 10 major TV projects. But instead of appearing on TV, these shows will available on video game consoles and computers. They will debut on Xbox Live on the Xbox One, Xbox 360, and PC starting this summer. They include dramas, documentaries, animated features, comedies, unscripted shows, and live events.

One of the biggest efforts is a television drama series set in the Halo sci-fi universe, which is Microsoft’s biggest video game property. Filmmaker Steven Spielberg is the executive producer of the live-action TV series, which is being created in partnership with Microsoft’s 343 Industries game studio and Spielberg’s Amblin Television. 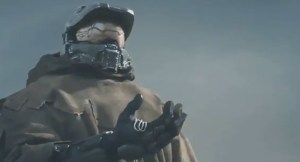 There’s plenty of competition in TV. But Levin, the executive vice president of Xbox Entertainment Studios, said Microsoft has advantages. The mission is to captivate, connect, and engage. To do that, Microsoft will make the shows interactive and available on multiple kinds of devices, from TVs to Microsoft Surface tablets.

“We’re a bit wary to talk about interactivity because it is experimental,” Levin said. “It’s a buzz word. Everyone talks about extended platforms. But we definitely recognize that this is an interactive platform.”

Microsoft has more than 125 people working at a studio in Vancouver, Canada, to create the technology on top of the Xbox Live social community to bring the original programming to life. The shows could, for instance, include live voting, which happened with the presidential debates on Xbox Live in 2012. But you can imagine a gladiator-style arena where the audience votes on whether somebody survives or not, Levin said, by way of example.

While interactivity is much easier to do with Xbox One, which has multitasking hardware, Tellem said that the shows would target features on both the Xbox One and Xbox 360 in order to reach the widest possible audience.

“We’ll be able to do some things only on Xbox One just because the architecture of 360 has its limitations,” Tellem said. “But we hope to achieve a similarity of experience.”

Among the shows being produced are six documentaries, dubbed Signal to Noise, about how modern technology has changed our world. The series is being produced by two-time Academy Award-winning producer Simon Chinn (Searching for Sugar Man and Man on Wire) and Emmy-winning producer Jonathan Chinn (FX’s 30 Days and PBS’s American High), through their multiplatform media company Lightbox.

The first installment, with the working title Atari: Game Over, explores the mystery around “the great video game burial of 1983.” Legend has that Atari Corp. received such an overwhelmingly negative response to its E.T. video game that it buried millions of unsold game cartridges in a landfill near the small town of Alamogordo, N.M.

Fuel Entertainment began investigating the legend, and, in December 2013, with help from local garbage contractor Joe Lewandowski, it acquired the exclusive rights to excavate the Alamogordo landfill. Fuel Entertainment sold those rights to Xbox Entertainment Studios, and the team will now film an excavation of the site. The show will try to determine if the story is true and interview a huge cast of characters, including Atari founder Nolan Bushnell. Zak Penn (X-Men 2, Avengers, and Incident at Loch Ness) is directing. It will air exclusively on Xbox One and Xbox 360 this year.

Another show is Every Street United, an unscripted series of eight 30-minute episodes and a one-hour finale. It focuses on street soccer stars who compete against each other and will gather for a 4-on-4 street game finale in the shadow of the World Cup in Rio de Janeiro in July. The coaches include legendary soccer players Thierry Henry and Edgar Davids.

The show includes a global search for the most gifted and undiscovered street soccer players in the United States, England, Argentina, Spain, Brazil, the Netherlands, Ghana, and South Korea. Each episode will feature narratives about the stars and the communities that shaped them. Jonathan Hock, an eight-time Emmy-winning producer, is directing the series. Emmy Award-winning producer Mike Tollin and Mandalay Sports Media are executive producing. The show will focus on the drama of stars who wanted to play professional soccer and instead found their calling in street soccer. The show premieres in June via Xbox Video for Xbox One, Xbox 360, Windows 8 for PC and Microsoft Surface, and Windows Phone 8.