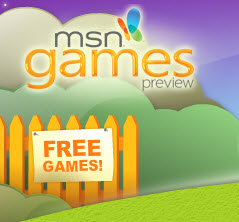 Hoping to become a bigger player in social games, Microsoft announced today it revamped its MSN Games casual online games web site and that it will team up with social game publisher CrowdStar, which has more than 50 million users on Facebook.

The move is an attempt to make the bridge from the era of casual games — defined by paid downloads of games that were mostly single-player online games — to social games in which players can team up with friends and challenge them to play online. Social games are proving to be a disruptive force for all of gaming. And casual web sites such as Microsoft’s MSN Games have to adapt or be left behind.

Microsoft recognizes the need to make its existing MSN Games web site more social, making it closer to games that have become hugely popular on Facebook. That’s where the alliance with CrowdStar comes in. CrowdStar makes games such as Happy Aquarium and Happy Island, which are social because players can link to their friends, share their achievements, compete on leaderboards and play online together.

Microsoft’s MSN Games portal was created years ago in the age when the concept of “casual games” was new. These were short titles that could be purchased at lower prices (at first for $20) than hardcore games ($40 or more). They also had lighter themes than were more appealing to women and older players. But free-to-play games (where users can play for free and pay real money for virtual items) have proved to be explosively popular on Facebook, where more than 200 million people play games each month. Microsoft had to modernize MSN Games or get left behind.

“We’ve made it easier to find and play the games you love while connecting to the people who matter most,” said Kevin Unangst, senior global director of PC and mobile gaming at Microsoft.

The MSN Games site won’t be flooded with new free titles. Microsoft says it will take a curator’s approach to posting high-quality online games on the site, starting with 35 games. Microsoft will also post real-time entertainment news from MSN Entertainment and feature a design that changes throughout the day. The new games will be connected via a social feature called the Microsoft Game Hub, which is much like the Xbox Live hub on the new Windows Phone 7 mobile phones. On the hub, you can define your gaming personality and add your gaming friends.

More than 9 billion messages are exchanged every day on Windows Live Messenger. Now Microsoft is infusing those chat sessions with the social features of the Microsoft Game Hub with titles from iWin, PopCap Games, Arkadium, GameHouse and others. That means you can play games with a friend while chatting. You can also play games directly in the web browser while searching on Bing. That feature has already seen more than 55 million game sessions during a trial period.