Microsoft is attempting to boost the launch lineup for the Xbox One with preorder bonuses for three of the system’s earliest releases.

Ryse: Son of Rome, Forza Motorsport 5, and Dead Rising 3 are all getting special Day One Editions that feature exclusive content. These special versions of the games are only available if you preorder through a retail outlet or download them from Xbox Live in the first two weeks after launch. Each game will debut alongside the console, which still does not have a firm release date. Microsoft has repeatedly said it will unleash the next-gen system in November.

The Day One car pack for developer Turn 10’s racing sim Forza 5 comes with three bonus automobiles. The only way to get the 2010 Audi TT RS Coupe, the 2013 Ford Focus ST, and the Lamborghini Gallardo LP570-4 Superleggera is in through this Day One downloadable content. 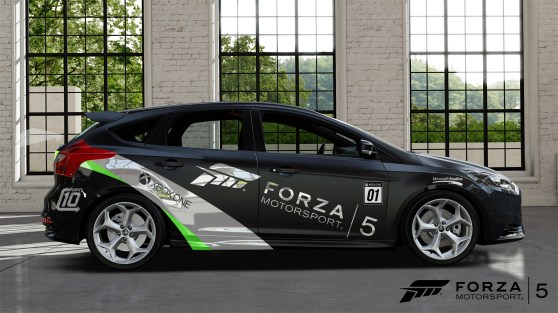 Above: The 2013 Ford Focus ST is exclusive to Forza 5 Day One Edition.

Capcom’s zany zombie game, Dead Rising 3, will have a Day One Edition that comes with a Dead Rising Tribute Pack, which is content that pays homage to the first two games. Players can dress their character in the suit of Frank West, who starred in Dead Rising, or Chuck Greene, the hero from Dead Rising 2. The DLC also comes with Frank West’s signature Zombie Slugger baseball bat and Chuck Greene’s Paddle Saw combo weapon.

Crytek’s Ryse: Son of Rome, which is an action game set in ancient Rome, will have a Day One edition that features an exclusive co-op multiplayer map and bonus weapon. The map is called Ruins, and it will have gamers hacking and slashing together in an abandoned temple. The weapon is the Legionnaire’s Trust Exclusive Sword that also has bonus in-game attributes.