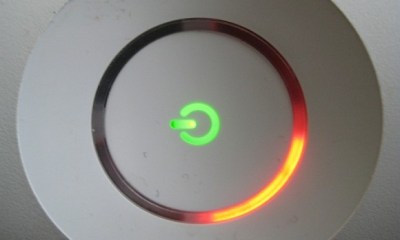 More stories are popping up about a new flaw in the Xbox 360 dubbed the E74 bug, named for the error code that appears onscreen when the console grinds to a halt.

Today, Microsoft acknowledged that a small number of systems are suffering from the error — which can disable your machine completely — and said the company is extending its free replacement warranty to cover afflicted consoles.

This proactive approach is much different from Microsoft’s initial reaction to the Red Ring of Death (RROD) defects that we wrote about last September. Maybe it’s learning from past mistakes.

Previously, Microsoft only offered free replacements to customers with the RROD problem, which resulted from overheating and dislodged graphics chips. The new warranty is designed to regain the trust of customers who complained that the company refused to replace their defective consoles.

A poll conducted by Joystiq in March showed that E74 errors became more common after November, when Microsoft launched the New Xbox Experience version of its Xbox Live online game service. Reports surfaced on the web attributing the problem to a loose video scaling chip. But that bears little relation to the New Xbox Experience software.

At the time, Microsoft said the E74 error referred to a general hardware error indicated by a single red flashing light in the Xbox ring and an error message on the screen. It claimed that it had no single root cause, suggesting that those with the problem should contact Xbox support. Today, the company said that the hardware error is associated with RROD failure. Therefore, it makes sense for the warranty to apply to E74 errors. Microsoft also said that it has made changes to the console that should weed out problems related to these failures. That may be a reference to last fall’s shipments of consoles with the code-named Jasper system board (which Microsoft hasn’t publicly acknowledged). The Jasper-based systems are said to have redesigned components that are more reliable. 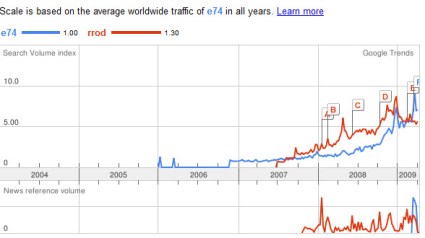 Engadget also ran a poll, with thousands of people saying that they had encountered the problem. A Google Trends table showing searches related to E74 shows a spike toward the end of 2008, with searches surpassing searches for RROD problems in the first quarter. The trend may be exaggerated due to the hype, but clearly the problem existed before the bloggers got hold of it.

Microsoft has been sued a number of times over the RROD problem — so it’s no surprise that lawyers who want to sue Microsoft (Kabateck, Brown Kellner LLP) are investigating the E74 bug very thoroughly.

I’ve been in touch with a few people who had the problem. Ryan Caraboolad, an 18-year-old student at the Rochester Institute of Technology, told me earlier this month that the glitch temporarily disabled his machine. Mysteriously, his roommate switched on the machine one day and it started working fine again.

Troy Edwards, a 27-year-old communications manager in Seattle, wasn’t so lucky. His original Xbox 360, purchased in the fall of 2007, flashed the E74 error code on Jan. 29 while he was watching a DVD movie, Pixar’s Wall-E. The picture began to fade out to snow as if it had an antenna problem. There were “random apparitions” on the screen, and then the box failed after about a minute. He hasn’t been able to get Microsoft to replace his console because it wasn’t under the RROD warranty.

The new policy should disarm critics who have been accusing Microsoft of covering up the E74 error. On the other hand, this is more ammo for Microsoft’s rivals, who have been stressing the high quality of their hardware.