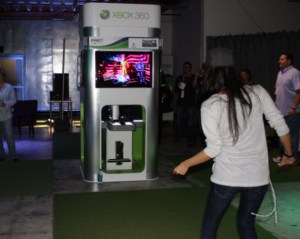 Microsoft said it has sold 1 million units of its newest motion-control system for the XBox 360, the Kinect, in just under two weeks and is on track to sell 5 million controllers by the end of the year.

The system records a person’s movements and allows them to control games using their bodies. The Kinect controller also features a microphone array that can detect what someone is saying from pretty much anywhere in the room.The controller allows XBox 360 users to control the console with their voice alone. For example, they can say “Xbox ESPN” to bring up the ESPN channel on their Xbox 360 dashboard. The Kinect device allows Xbox 360 owners to start video chats with other Kinect users, as well as voice chats with Windows Live users.

That’s not where the fun ends, though. And a number of intrepid hackers managed to crack into the device and open up its software to other developers. The effort was undertaken at the urging of New York-based Adafruit Industries, which offered a $2,000 bounty for an open-source hack. Hackers have already produced a functioning demonstration of Kinect being used for multi-touch gestures. You know, the kind you see in futuristic movies like Minority Report.

Compare that to the Nintendo Wii and the Sony Move, both of which are hand-held controllers developed exclusively for games. They are game controllers in the truest sense and do little to help navigate the media experience on either console outside of point-and-click actions.

So far it seems like the best bits of Kinect have shown up outside of the actual gaming component. The controller launched with a number of games like Dance Central, which teaches players how to dance and gives them scores on how well they match up with professional dancers. But the launch titles were quite lukewarm, and Kinect isn’t quite as good as it should be, according to VentureBeat’s gaming guru Dean Takahashi.

What isn’t immediately clear is what is driving the sales. Are buyers attracted to the device’s power outside of the context of games, or do they plan to use it primarily for games? About 40 percent of all time spent using the Xbox 360 is spent on activities outside of video games, said Dennis Durkin, chief operating officer of Microsoft. So that almost guarantees that at least some consumers picking up the device are doing so to turn their XBox 360 into a voice-controlled media center.

Consumers can pick up the new controller for $150 by itself, or as part of a bundle with a new XBox 360 for $300. The company didn’t specify how many XBox 360 consoles it sold as part of the Kinect bundle.